The enigmatic and oppressively difficult mobile game Flappy Bird has turned into quite the cash cow for Vietnamese developer Dong Nguyen. In an interview with The Verge, Nguyen revealed that the game, which has been sitting atop the App Store and Google Play Store charts for nearly a month, is earning on average $50,000 a day from in-app ads.

If you're only now hearing of Flappy Bird, the game goes as follows: you tap the screen to propel a tiny, pixelated bird upwards. If you hit any of the green pipes in your way as you fly towards some unknowable, unreachable finish line, the game is over. The goal is simply to accumulate the highest score possible. The catch? You'll very likely spend an hour even reaching a score of five. The app has been downloaded 50 million times, and has accumulated over 47,000 reviews in the App Store — as many as apps like Evernote and Gmail. Mobile games studios generally spend months coding up deliberately addictive and viral titles, but Nguyen did it by spending a few nights coding when he got home from work. 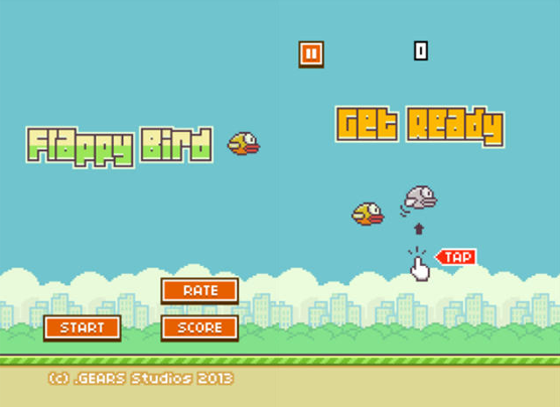 "The reason Flappy Bird is so popular is that it happens to be something different from mobile games today, and is a really good game to compete against each other," Nguyen says. "People in the same classroom can play and compete easily because [Flappy Bird] is simple to learn, but you need skill to get a high score." The app is compatible with Apple's Game Center and Google's Google Play Games, so it's easy to compare scores with friends. You can also, of course, share your scores on Facebook and Twitter, a feature which some have attributed its success to.

In my own manic pursuit of higher scores, I often longed for an in-app purchase to turn off the game's distracting ads — because as any Flappy Bird veteran knows, even something as involuntary as blinking can send you spiraling into doom. But Nguyen says he has no plans to change or even update the game. "Flappy Bird has reached a state where anything added to the game will ruin it somehow, so I'd like to leave it as is," he says "I will think about a sequel but I'm not sure about the timeline." In the meantime, Nguyen has a few other hit games on his hands.

"Flappy Bird has reached a state where anything added to the game will ruin it..."

Super Ball Juggling has also been hovering in the App Store's top ten, as has Shuriken Block. Neither game as perfectly balances difficulty and fun as Flappy Bird, but it's become clear that Nguyen has a knack for bite-sized arcade titles. The games' mechanics are inspired by Nintendo titles Nguyen played as a child, and even by some of the characters therein. Flappy Bird's titular bird was inspired by Cheep Cheep in Super Mario Bros, as are its iconic green pipes. Adding advertisements to the mix was his modern spin on the titles. "I want to make an ads-based game because it is very common in the Japanese market — minigames are free and have ads," Nguyen says. The formula seems to be working — Nguyen's tiny dotGears gaming studio is cleaning up. The company has amassed hundreds of thousands of dollars from games that take just one tap to play.

DotGear's now-famous titles only spiked in popularity in November, 2013. Flappy Bird, for one, launched all the way back in May, 2013. Nguyen can't figure out exactly why the games took off, but plans to keep on building new ones: his next project is a fresh take on the popular "Jetpack" genre of mobile games. Nguyen's games have an odd resemblance to the pick-up-and-play appeal and frenetic speed of games like WarioWare. It might not be long before you can fill a home screen with bite-sized dotGears titles that will make you pull your hair out. But then you'll come back for more.

The extinction of 'Flappy Bird': the rise and fall of a frustratingly simple mobile game