Vancouver is embracing the strange and lighthearted nickname that a local artist gave to one of its public spaces: Dude Chilling Park. The nickname came about after the artist installed a replica park sign in Vancouver's Guelph Park, playing off of a wooden statue installed there resembling a person relaxing on the green. After initially removing the Dude Chilling Park sign back in 2012, Vancouver's Park Board this week reinstalled it as a permanent piece of public art — though the park's official name will stay the same.

"We were really impressed by the community that came out and said, 'We really love this sign, it really resonates with us," Niki Sharma, chair of the Vancouver Park Board, tells Global News. In the year after it was removed, over 1,800 people signed an online petition requesting that Vancouver actually rename the park itself, and Sharma says that the vast majority of residents who the Park Board spoke with supported bringing back the sign. Shortly after the sign was first pulled, Global News reported that street artist Viktor Briestensky had taken credit for its creation.

Not everyone is happy about the park's silly new sign, however. Global News reports that a local group thinks the sign is actually a drug reference and will be detrimental to the community. "A lot of the residents feel that this isn’t a game," Steven Bohus, a representative of the Residents Association of Mount Pleasant, tells Global News, "There is a school there, there’s a parent advisory committee, and I don’t think this is a joke." 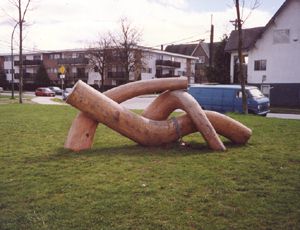 Sharma suggests that most residents haven't read so far into the playful new installation. "I don't think [Dude Chilling Park] is in any way associated with drug use or in any way enables it," she tells Global News. "It's a really creative piece of artwork." She and the Park Board are excited about the outpouring of support and the broad attention it's brought to Vancouver. "If it brings people to our parks, if it helps them enjoy their experience while they're there, then we're happy about it."