Carl Icahn 2.0: an icon of '80s greed is back to shake up Silicon Valley

Share All sharing options for: Carl Icahn 2.0: an icon of '80s greed is back to shake up Silicon Valley

For techies scanning the headlines over the past few months, one name has become an increasingly common occurrence: Carl Icahn, the legendary "vulture capitalist," who first made a name for himself during the leveraged buyout boom of the 1980s, which pillaged profitable corporations for personal profit. These days Icahn proudly wears the moniker "activist investor," and has been using his billions to shake things up at technology firms like Netflix, Dell, eBay and Apple.

Why has one of the original "barbarians at the gate" returned to stir up trouble in tech? "Right now, tech companies are overflowing with cash and are extremely well-valued compared to other sectors," explains Joshua Brown, a veteran stock trader-turned-money manager. "Icahn is the one guy with enough money of his own to grab these companies by the lapel and say, 'Listen motherfucker, I’m not going away until you give me what I want.’"

"Icahn is the one guy with enough money of his own to grab these companies by the lapel."

What exactly does he want? That depends on the situation. With Apple, he is eager to loosen the purse strings on its massive stockpile of overseas cash. With Dell, he was fighting to prevent the company from going private unless it paid a higher premium to shareholders. He wanted Netflix to sell itself to the highest bidder and he hopes eBay will take his advice and spin out PayPal into a separate company. In every case he’s looking for a major shakeup that will "unlock value" for shareholders, himself included.

To understand Icahn’s seemingly unending appetite for high level corporate confrontations, you need to go back to his roots. In the 1980s, a class of high-profile investors rose out of the world of leveraged buyouts (LBOs). Typically this meant they were finding companies with strong balance sheets, borrowing heavily against that cash flow to buy up stock, then attempting a forced takeover of said company.

Investors like Icahn would sell junk bonds for 90 percent or more of the funds they needed to acquire a stock position large enough to wrest control of board seats. From there it was a matter of unlocking value at the company, typically by selling off assets, spinning off valuable divisions, or shedding employee overhead. When the stock rose on these moves, the "raiders" would sell out, pocketing a nifty profit, and sometimes saddling the company they had invaded with much of the debt built up to acquire its stock in the first place. Companies took to buying back the shares Icahn controlled at a premium, a practice known as "greenmailing," rather than trying to battle him in the boardroom.

This obviously raised many eyebrows in both government and finance as a ruthless and unsustainable business practice. It was a particularly heated topic after Icahn’s takeover of TWA, the legendary airline founded by Howard Hughes. He used cheap debt to finance the takeover and a few years later took the company private. It then became his piggybank, providing the cash Icahn used as collateral in a number of big deals. Icahn eventually sold off TWA’s most valuable routes, saddled the company with $540 million in obligations, and pocketed a hefty profit for himself on the way out. When the company went bankrupt in 1992, it was viewed by many, especially in the former TWA hub of St. Louis, as the raping and pillage of a corporate icon. 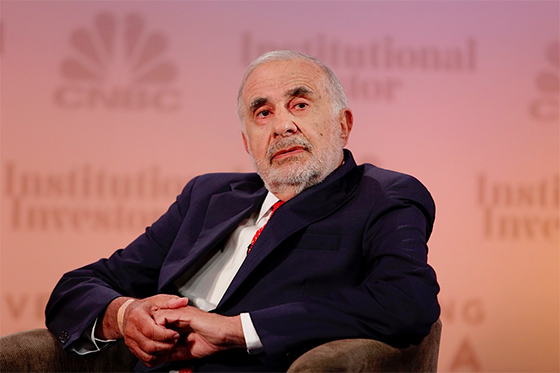 "The mantra of the raiders was, ‘greed is good.’"

In researching the story I chatted with my own father, who worked at a company called Papercraft in the 1980s. He remembers with grim humor the era of leveraged buyouts. "A lot of corporations back then put more emphasis on rewarding the community and employees than maximizing shareholder value," he said. "The mantra of the raiders was, ‘Greed is good.’" The new owners made drastic cuts and improved the bottom line. But often they also weighed the company down with debt based on wild predictions about how they could transform its potential. Papercraft went bankrupt six years after the buyout, and the junk bonds issued to buy it became worthless.

The Carl Icahn of today is simultaneously a gentler and more frightening opponent for one simple reason: he no longer needs any debt to buy his way into multibillion-dollar firms. Over the last decade, through a series of successful moves, Icahn has become the sole force behind Icahn Enterprises LP, a diversified holding company that puts him in command of roughly $24 billion in capital. "As essentially the wealthiest individual hedge-fund manager of all time, he is in an extremely rare position," explains Brown. "Nobody can tell him what to do or what not to do."

"Nobody can tell him what to do or what not to do."

Interestingly, in the age of social media, Icahn has discovered that he doesn’t necessarily need to put huge mountains of cash to work in order to get his way. "His modus operandi hasn’t changed much since the '80s," says Paul Kedrosky, an investor and author of the popular finance blog, Infectious Greed. "But he’s learned that he can use the megaphone of Twitter to do a lot of the heavy lifting." All it took was a single tweet from Icahn to send the value of Apple shares up 5 percent, or roughly $17 billion.

Few people see Icahn’s moves as anything like the predatory raids of the '80s. While corporations in my father’s time might not have moved fully into the modern era, today’s technology giants have few employees relative to their size, accountants sizing up every tax loophole, and plenty of fat around the middle. "Tech companies have gotten away for far too long with far too much cash on their balance sheets," says Kedrosky. "I applaud Carl for forcing people to think hard about why they are carrying so much, and for pushing them to return some of it to investors."

Apple shares rose 5 percent on a tweet from Icahn

Of course it's not all benevolent bullying. The older, more rapacious Icahn and his newer, milder self mingle together in his recent demand that eBay spin off PayPal. He did this after building up a roughly 1 percent stake, arguing that each individual company would be worth more as a standalone business than they are under the safe corporate roof. It’s not the first time someone has suggested this play, as PayPal has consistently outgrown its parent company and contributed a wider margin to its profits. Spinning it out would no doubt create a handsome reward for current shareholders, but probably weaken eBay in the long run.

It’s a classic Icahn move — one that on paper could be justified as "shareholder activism," — but often has little upside for the company, its employees, and its longer-term stakeholders. Of course there are numerous occasions where Icahn applied pressure but failed to force a change in management or strategy. In some cases he lost money on these outings, but just as often he has profited, as the media coverage around his takeover bids prompted a dramatic run-up in the share price. In a recent example, Netflix refused to bend to his will, yet Icahn earned at least $825 million because of the rise in its stock. "He has a great eye for companies with upside," says Brown. "A lot of times, even when he gets nothing he asks for, he wins."