Google's $35 Chromecast dongle made it cheap and easy to show off YouTube videos on your TV. Now, the company sees another narrow window of opportunity for Chrome: teleconferencing. "Audioconferencing takes pain to a completely new level," says Caesar Sengupta, VP of product development for Chrome. Today, the company plans to fix that with a $999 kit that uses a souped-up Intel Core i7 Google Chromebox and $250-a-year Google cloud services to make setup as painless as possible. "It takes minutes to go from a full packaged box to a meeting room that's ready to go," says the exec.

The Chromebox for Meetings package comes with a collection of off-the-shelf components, including a Logitech HD webcam, a Jabra speakerphone, and a Boxee-like remote control with a keyboard on the back. It uses Google+ Hangouts for video chat such that any Gmail user can join a meeting from any laptop, tablet, or smartphone anywhere in the world. Conference organizers can start and attendees can join a meeting with a single button press on the remote control, or even remotely. 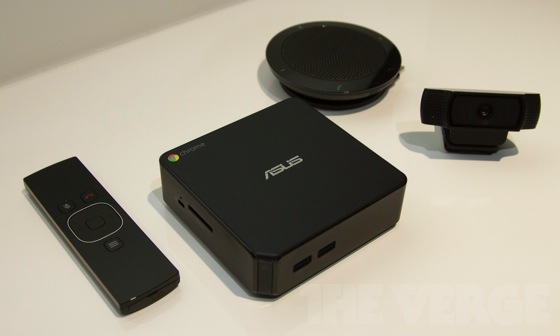 Once a meeting room is set up with one of the Chromeboxes over ethernet or Wi-Fi, says Sengupta, there will also be no confusion over when the meeting room is in use: the service syncs with Google Calendar (or, in the future, with a Microsoft Exchange plug-in) to prominently display the schedule of upcoming meetings, and allow a user to start a new meeting just by typing a new meeting name into the terminal with the keyboard on the back of the remote.

The system also tries to address pain points of meetings running too long, by reminding speakers when the next meeting is scheduled to begin, highlights users who are currently speaking, and will notify people who speak up if they happen to be muted to avoid embarrassment. While the software is free for the first year, the company plans to charge a $250 annual management and support fee per device to maintain the service and provide 24/7 assistance. 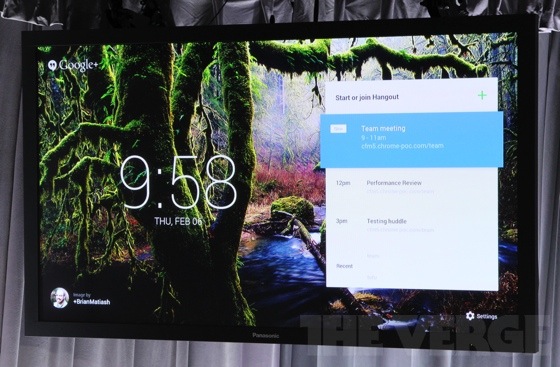 "If you’ve never been kissed by your CFO before, here’s your chance."

While $999 might seem a little expensive for a Chromebox kit and some off-the-shelf teleconferencing components, particularly when such a box retails for $179 without the pricy Core i7 chip, Sengupta reminded press that competing enterprise teleconferencing solutions can cost quite a bit, allowing companies to purchase many Chromeboxes for Meeting packages for the price of an executive teleconferencing solution. "If you've never been kissed by your CFO before, here's your chance," he quipped. Sengupta says the Core i7 processor is necessary to process and encrypt many simultaneous streams locally, and that normal Chromeboxes won't be able to host the service as a result.

Chromebox for Meetings is available today in the US with Chromebox hardware from Asus, with HP and Dell adding hardware in the coming months. Australia, Canada, France, Japan, Spain, UK and New Zealand availability is coming later this year, according to the company.

When asked by press at the product unveiling, Sengupta said the new Chromebox for Meetings shouldn't be construed as a plan to expand the Chrome hardware business to other platforms per se. "We don't really think of this as just a way to enter a new space for us, we saw this problem that needed to be addressed," he replied.

"We're always on the lookout for problems that exist in the market today."