Many photos of Earth taken from space have entered into legend; The Blue Marble's beautiful, glowing globe is one of the most recognizable images of all time, and Carl Sagan's Pale Blue Dot put our planet's place in the vastness of the universe into poignant perspective. The first image of Earth from Mars shot by NASA's intrepid Curiosity rover might not reach those heights, but it provokes a similar sense of wonder nonetheless.

Taken with Curiosity's Mastcam, the shot casts Earth as the brightest object in the night sky, with the Martian landscape lending scale at the bottom of the frame. It's been processed to remove interference from cosmic rays, making the sky as clear as you might imagine. Look closely and you can just make out the moon orbiting Earth — NASA says that both objects would be visible to the naked eye from Mars' surface, appearing as "evening stars." You can download high-resolution versions of the photo from NASA's website. 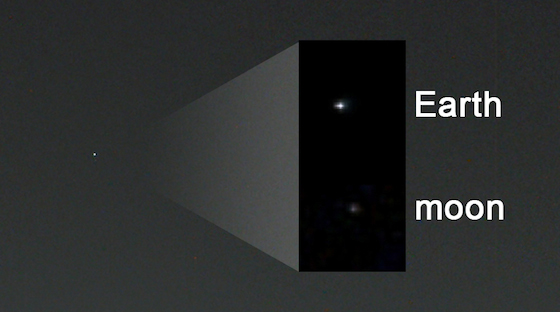