Share All sharing options for: Left for dead: the mysterious disease killing thousands in Central America

A sugarcane worker receives treatment for chronic kidney disease at his home in Nicaragua.

Ed Kashi arrived in Nicaragua last January to shoot some photos for a local nonprofit organization. At the time, it seemed like just another two-week commission — no different from the countless others he's completed during his career as a far-flung photojournalist — but what he saw there stuck with him for much longer.

"Literally every single day I was there, there was a funeral," says Kashi, who is based in New Jersey and works for VII Photo. "It was astounding, actually."

The funerals he saw were not for slain soldiers or elderly villagers, but for young sugarcane field workers — mostly men —who had died from chronic kidney disease, or CKD. This debilitating renal disease has, over the past few years, killed thousands of agrarian workers across Central America and parts of south Asia. The disease itself is hardly a new phenomenon, though the strain affecting Nicaragua and neighboring countries is unique; many of those affected are far younger and healthier than typical CKD patients, and a staggering number work in sugarcane fields. And while theories and hypotheses abound, scientists have yet to figure out what's actually causing it. 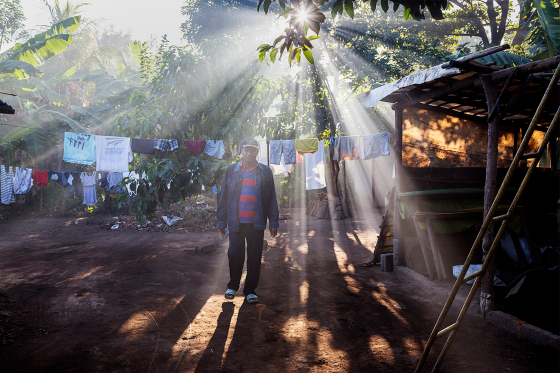 A former sugarcane worker walks near his home in Chichigalpa, Nicaragua. He suffers from end-stage kidney disease.

It's not clear when CKD began killing field workers in Central America, though reports suggest that it dates back at least 20 years. There are no reliable data on mortality rates, either, but experts estimate that the disease has killed thousands — perhaps tens of thousands — within the past decade. Cases among sugarcane workers have been reported along the Pacific coast of Central America, while similar cases involving rice farmers have been reported in Sri Lanka and India. The disease has been especially devastating in the low-income countries of El Salvador and Nicaragua, where many workers rely on subsistence wages from sugar plantations to provide for their families.

The situation has dramatically worsened over time, as well. Over the past 20 years, the number of men who died from CKD in El Salvador and Nicaragua increased by a factor of five. In the town of Chichigalpa, where Kashi photographed CKD patients last year, a community called La Isla has been renamed La Isla de las Viudas, or "the island of widows" — a chilling testament to the huge number of men who have succumbed to the disease.

CKD affects more than 20 million people in the US, according to the Centers for Disease Control and Prevention (CDC). The disease comes on slowly, with only subtle symptoms at the beginning, and it can be months or years before loss of kidney function occurs. Even then, symptoms like nausea and sudden weight loss may not occur until a patient's kidney function is below 10 percent. If detected early, it can be treated with medication and lifestyle changes, though late-stage CKD often requires dialysis or kidney transplants to avoid kidney failure. The disease is usually associated with diabetes and high blood pressure, and is most common among adults over the age of 70. But that's not the case in Nicaragua and other parts of Central America.

"It seems to be disproportionately affecting young, healthy males," says Dr. Peter Hotez, dean of the National School of Tropical Medicine at the Baylor College of Medicine. "And that's one of the tip-offs that something odd is going on."

"Why are we seeing this now?"

Many have posited that working conditions may be to blame, suggesting that the disease could be caused or exacerbated by the dehydration that workers suffer while laboring for long hours under the blistering equatorial sun. Others have speculated that the workers may be inadvertently harming themselves by chewing on sugarcane stalks as they work. Sugarcane bark produces a refreshing sweet juice, leading researchers to question whether years of sugar intake and dehydration could play a role. But Hotez says that other factors are likely at work.

"People have been sweating and getting dehydrated in sugarcane fields for hundreds of years, at least since the start of the Atlantic slave trade," he says. "So why are we seeing this now? [That] makes us think that there's something new causing it."

There's a growing suspicion that agricultural chemicals may be the x factor behind the CKD epidemic. A 2012 study on CKD in Sri Lanka found that two toxic metals — cadmium and arsenic — may be responsible for the spike in cases there over the past 20 years. Both of the metals are used in farming chemicals (cadmium in fertilizer, arsenic in pesticides), and rice farmers in the region had relatively high levels of each in their blood. Although their levels were within the safe range, experts from the World Health Organization (WHO) suggested that continuous exposure to the metals could explain the country's elevated CKD rates.

Despite these findings, researchers have yet to identify what's causing the disease in Central America, leaving many families with an unenviable conundrum; they're well aware that harvesting sugarcane could kill them, but they don't have many other options. More than 40 percent of the population lives below the poverty line, and sugar remains one of Nicaragua's major exports. In 2012, the country's sugar exports were valued at nearly $195 million, marking a 26 percent increase over the previous year. 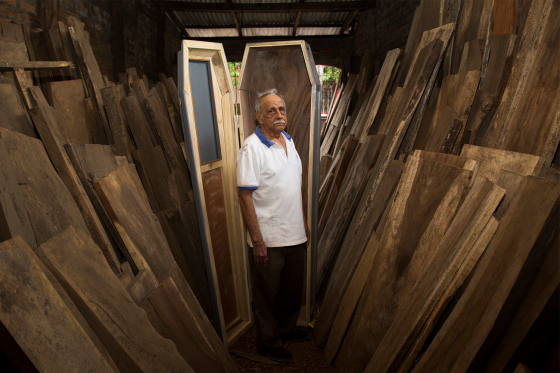 A coffin-maker poses at his workshop in Chichigalpa, Nicaragua, where chronic kidney disease has made funerals a regular occurrence.

Sugar plantations have come under increased criticism as awareness of CKD has spread, with many accusing them of effectively working their employees to death without sufficient hydration. In Nicaragua, the highest rates of CKD have been seen near Ingenio San Antonio, a sugar plantation owned by the Pellas Group conglomerate that accounts for half of the country's processed sugar. Representatives from the Pellas Group have insisted they've taken measures to ensure that their workers are properly hydrated and cared for, but Kashi says the company has actively sought to silence workers and widows through intimidation. When he visited last year, many locals asked not to be identified by name or chose to conceal their faces from the camera, for fear of being reprimanded by the company.

As a result, Kashi says, a haunting sense of resignation has fallen upon the entire region. Many are too poor to afford dialysis or other treatment, and those who do pursue dialysis often do so with cheap at-home machines, operating them in unsanitary conditions that jeopardize effectiveness.

"There was a sort of stoicism," Kashi says of the people he met last year. "Every day they would show up for the funeral, it was sort of this fatalistic ritual. I couldn't help but wonder, ‘Why aren't you guys more pissed off?'"

There are signs of growing discontent. Last month, a group of sugarcane workers staged a protest in Chichigalpa, demanding that their employers pay for medical treatment and provide suitable compensation for the families of deceased laborers. After one farmer died during clashes with police, the government vowed to work with both groups toward finding a solution.

Health authorities are treating the issue with a greater sense of urgency, as well. The WHO last year described Central America's CKD crisis as a "serious public health concern," calling for greater surveillance and deeper investigation into its root causes. The announcement was welcomed by public health advocates, though many say it's long overdue.

"If this were occurring among wealthy people in the suburbs of the US ... it would've gotten attention a lot sooner," Hotez says. "But because it's occurring among people who have nothing — I call them forgotten people with forgotten diseases — this has gone on far longer than it should have."

Kashi, meanwhile, is still working to introduce the issue to wider audiences. A self-described advocacy journalist, he returned to Nicaragua not long after his first visit, and last month launched a crowdfunding campaign to launch another project in the region. The idea is to combine still photography with interviews and video footage to create a database of media materials that could be used and distributed in schools, non-governmental organizations, and research groups. "I believe that part of doing business is to treat people well and nurture a healthy environment," the photographer says. "Not to just rape and pillage and get the most you can and leave the place for dead."