Inspired by Pablo Picasso's light paintings, an artist has created light pen drawings that map the geographical mentions in hip hop lyrics. Last year, Tahir Hemphill set out to create a database containing every lyric in rap history for his Kickstarter-funded Hip Hop Word Count project, and he's now using that data to find patterns in the language rappers use.

Hemphill was able to extract every geographic mention from various rappers' back catalogues, and translated the place names into geo coordinates, mapping the paths between each onto a globe. After visualizing the paths in 3D, he used the model to plot paths for a robot arm, which drew them out while holding a light pen. The example above shows the lyrical journey of Jay-Z through each track from his 18-year recording career. The long arc on the left, explains Hemphill, was born from three lyrics: "40/40′s out in Tokyo" from the song "Do U Wanna Ride," "Don’t cry for me Argentina" from the song "American Gangster," and "Schooled me with hard knocks, better than Berkeley" from the song "Hello Brooklyn 2.0." 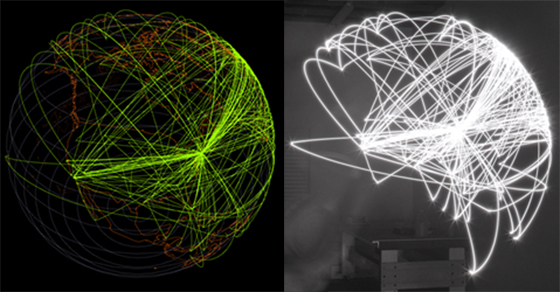 On the left, a 3d model representing the rapper Nas' lyrical journey. On the right, the light drawing based on the map.

In total, Hemphill has created twelve of these maps, and calls the collection Maximum Distance. Minimum Displacement. Perhaps unsurprisingly, Jay-Z's "Around The World" features the most locations, while Nas' back catalogue was the most-travelled as a whole. If you're a hip-hop fan, it's well worth reading through Hemphill's site, Stable Crops, where he posts data and visualizations from the Hip Hop Word Count, including analysis of the literacy level of several rappers.