It's hard work convincing anyone with a modern smartphone to carry a point-and-shoot camera with them too. So camera manufactures have started making their point-and-shoots both accessible and distinct — with many offering one particular strength, rather than trying to be great all around. That's the same approach that Nikon is continuing with its latest Coolpix cameras, six of which it unveiled last night. 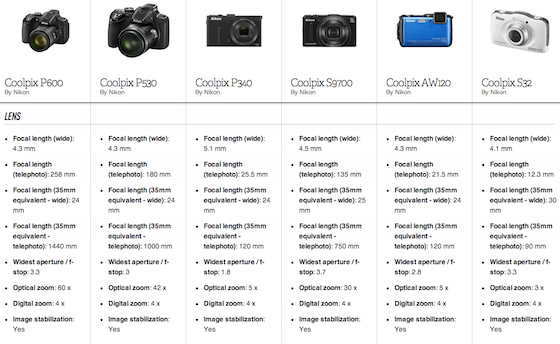 Click above for full specs on all six cameras.

A pair of superzooms to flank the competition

The cameras fall into three different categories: superzooms, waterproof, and general purpose. Nikon's new pair of superzooms, the Coolpix P600 and P530 are the most expensive of the new cameras, costing $499.95 and $449.95 respectively. That's likely a result of their huge zoom ranges, with both set up as 24mm equivalents at their widest and zooming in to 1440mm and 1000mm respectively, giving them a huge telephoto range.

Both the P600 and P530 sit pretty much where they should when compared to a competing superzoom like Canon's PowerShot SX50 HS. It originally sold for $479.99 — directly in between the two Coolpix models — and can zoom from 24mm to 1200mm, once again landing right between the two. Nikon is probably well aware of this. It views both new superzooms as the successors to its Coolpix P520: rather than just making one new camera, it split the line in two, making one camera a bit less expensive and the other a bit more powerful for those who need it.

Nikon takes a similar approach with its more general-purpose cameras, though their strengths here are vastly different. The Coolpix P340 and S9700 are both pocketable cameras around the same price — $379.95 and $349.95 respectively — but the former focuses more on image quality and the latter focuses more on zoom. The P340 has the largest sensor of all six cameras unveiled last night. At 1/1.7 inches, it isn't particularly large as far as cameras go, but it's certainly notable compared to smartphones and the average point-and-shoot.

Working in sync with that larger sensor is a lens that lets the P340 shoot as wide open as f/1.8. Those elements combined should be enough to give the P340 a lot more depth of field than the common point-and-shoot, and it'll be a help when it comes to shooting in low light too. That puts the camera pretty much on par with Canon's PowerShot at this level, the S120, which has the same sensor size and widest aperture. And though it was a lot pricier at launch, the S120 can be found for about the same price as the P340 today too.

One for low-light, another for long distance

Nikon's other general shooter, the S9700, is about the same size as the P340 but takes a bit more after the new superzooms: it has the same smaller 1/2.3-inch sensor they have and can zoom in up to 750 mm — a huge range for its small size. It too about sizes up with its competition, cameras like Canon's PowerShot SX280 HS, which it matches on connectivity features, trounces on zoom range, but comes in far higher when it comes to current price.

Nikon's final two point-and-shoots are waterproof, offering something that few smartphones do — let alone while maintaining good image quality. The more capable of the pair is Nikon's Coolpix AW120, which is waterproof down to 59 feet, has a 1/2.3-inch sensor, and both Wi-Fi and GPS. It's also the more expensive of the pair by far, at $349.95. The new $129.95 Coolpix S32 isn't nearly as capable, including a smaller sensor — just 1/3.1 inches — none of the connectivity, and only 33 feet of waterproof depth. That's still more than enough depth for pools and the beach, and Nikon is betting its low price and basic shock-proofing will make the S32 an obvious choice for parents with younger children.

That all makes Nikon's six new cameras an eclectic bunch — but the point isn't just doing battle everywhere its competitor does, it's giving potential photographers a good reason to buy a camera that isn't attached to a smartphone. For many, that's what DSLRs and mirrorless ILCs are for, but there are plenty who might find the diverse set of features on Nikon's newest just as compelling.

There were a couple other updates to the database this week:

If you want to learn more about any of the products mentioned above, all of our information on them can be found through the database box located beneath the article. For more on cameras, speakers, and just about every product around, you can check out the full Verge Database right here.