In the first screenshot, the Notification Center, or "Action Center" as Microsoft is labelling it, is shown when you take a short swipe from the top of the screen. This will display four basic quick settings that are shortcuts to options like Wi-Fi, Bluetooth, and other system settings. All four are customizable, and the basic Action Center also displays the date and a battery level percentage. If you pull down further on the Notification Center, a full "Action Center" is displayed. The second leaked screenshot shows how toasts and notifications from apps are collected in the full version of Action Center, and they can also be silently added, updated, and deleted in this view. 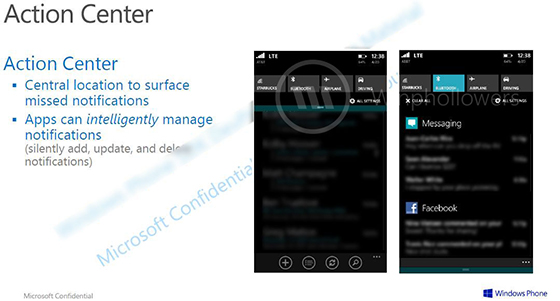