NASA has discovered further evidence that there was once water on Mars — and the agency didn't even need to leave Earth to find it. A group of researchers has discovered that a 30-pound Martian meteorite found in the Yamato Glacier in Antarctica features curved micro-tunnels that are consistent with moving water. According to NASA, the discovery is "reviving debate in the scientific community over life on Mars."

"The planet is revealing the presence of an active water reservoir that may also have a significant carbon component," says Everett Gibson, a scientist at NASA's Johnson Space Center in Houston. The meteorite itself is 1.3 billion years old, and is believed to have landed in Antarctica 50,000 years ago. It was first discovered in 2000. In addition to the tunnels, the meteorite also features tiny, carbon-rich "spherules" squished in between the various layers of rock, a phenomenon similar to another Martian meteorite that landed in Egypt in 1911. 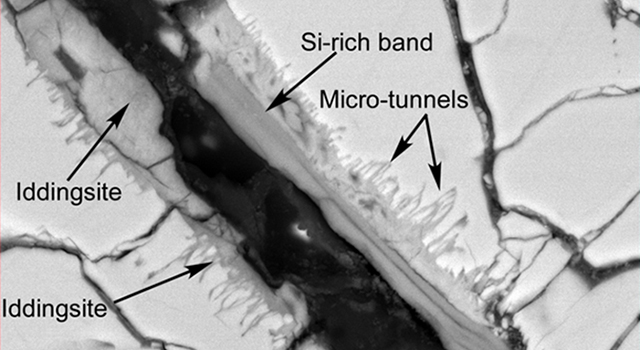 "The planet is revealing the presence of an active water reservoir."

Of course, this is far from the first evidence of water on Mars. Study of the planet itself has shown water possibly seeping out from the ground, while it's believed that in the past the planet was home to lakes that could have supported life. But while that research was done from afar, thanks to machines like the Curiosity rover, the meteorites allow scientists to study these phenomenon up close, which lets them perform a much wider array of tests.

"We can never eliminate the possibility of contamination in any meteorite," says Lauren White, from NASA's Jet Propulsion Laboratory. "But these features are nonetheless interesting and show that further studies of these meteorites should continue."