Iterate and update. That's the mantra of the smartphone world these days. Where radical design changes between generations of phones might have been commonplace just a year or so ago, most manufacturers are sticking with designs that work and iterating on them with each generation. You can see that in Apple’s iPhone 5S, which looks exactly like its predecessor. Or Samsung’s recently announced Galaxy S5, which, lo and behold, looks almost exactly like last year’s Galaxy S4.

LG’s new G Pro 2, a follow-up to last year’s Optimus G Pro phablet, doesn’t break any new ground either. It’s faster, feels nicer, has an improved camera and a bigger display, and runs a newer version of Android. But it’s still the same idea as last year: a really big device that straddles the line between smartphone and tablet.

There was a lot to like about last year’s G Pro — the display was great for watching video, the battery lasted all day, and it had great performance. But a number of nagging issues kept it from being the phablet to buy, and it was easily overshadowed by Samsung’s more popular Galaxy Note devices. A year on, LG has moved buttons around and increased the size of the screen, but it didn’t add any major new features — there’s no stylus to be found here and the software will feel very familiar to anyone who has used an LG phone in the past year. 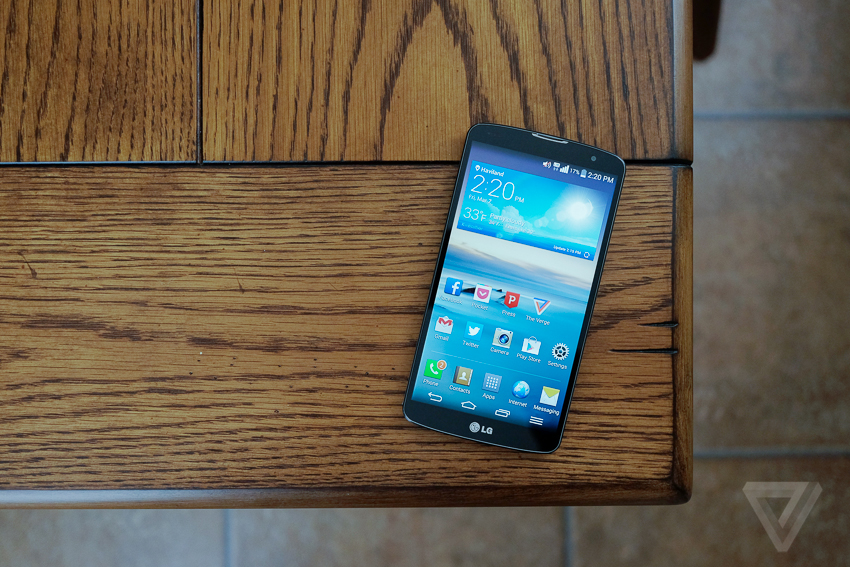 The G Pro was LG’s first phablet-style device that made sense — its 5.5-inch display was right in line with Samsung’s offerings at the time and it included a number of software tweaks to take advantage of the larger screen. The G Pro 2's 1080p display expands to an even larger 5.9 inches, and it’s just as nice to look at as before, with great viewing angles and color accuracy. It's just bigger now. Nearly half an inch sounds like a lot on paper, but in practical use it doesn't demonstrably change the experience. It just keeps LG up with the Joneses, surpassing the 5.7-inch display on Samsung's Galaxy Note 3 and matching monstrous smartphones from HTC and others. 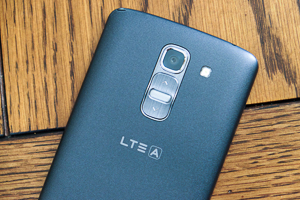 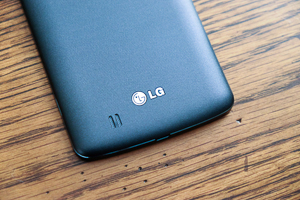 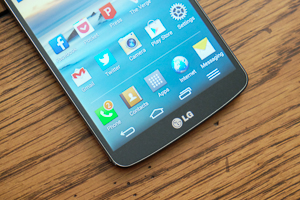 Despite the larger screen, the G Pro 2 isn't significantly larger than its predecessor. That's quite the feat: it's still a very big device that's impossible to use with one hand, but it's barely bigger than before, even with its larger screen. It's also noticeably smaller and easier to manage than HTC's One Max or Oppo's N1, both of which also have 5.9-inch displays. Part of this is thanks to LG's decision to use only on-screen buttons, and part of it is because the bezels are just smaller than before.

As with the G2, LG moved the G Pro 2's power button and volume rocker to the back of the device, just below the camera. And as with the G2, I just can't get used to their placement. It doesn't feel natural, despite what LG claims, and I was always second-guessing which button I was pressing. (The notification light built into the power button itself is a nice touch, however, and I did use the volume-down key to launch the camera on a handful of occasions.) I wish it would move them back to where they belong for the next generation of the G Pro, but I don't think that's likely.

The most significant update to the G Pro 2's design is the new textured finish on the back. Gone is the loathed glossy plastic finish, replaced by a fine pattern that's easy to grip on to when I grab the device. It's still plastic, but this minor change dramatically improves both the look and feel of the G Pro 2.

The G Pro 2 also benefits from a slightly larger battery and an updated Snapdragon 800 processor. It's fast and responsive and lasts all day, and then some. I've always said that the biggest advantage to these giant phones is the fact that they can have giant batteries and the G Pro 2’s 3,200mAh cell is one of the biggest. On our rundown test, it mustered 9 hours and 52 minutes and in real life I was easily able to use it for a day or more before having to charge it back up.

The new camera offers the same 13 megapixels as before, but LG says it has significantly improved the optical image stabilization system in the lens. The G Pro 2 can take good, detailed photos, but many of them lack the punch and wow factor of photos from an iPhone or a Samsung. It also suffers from holding the shutter open too long — a common problem with phones with optical stabilization — which made it difficult for me to get a sharp picture of my fast-moving toddler or a restless pet. 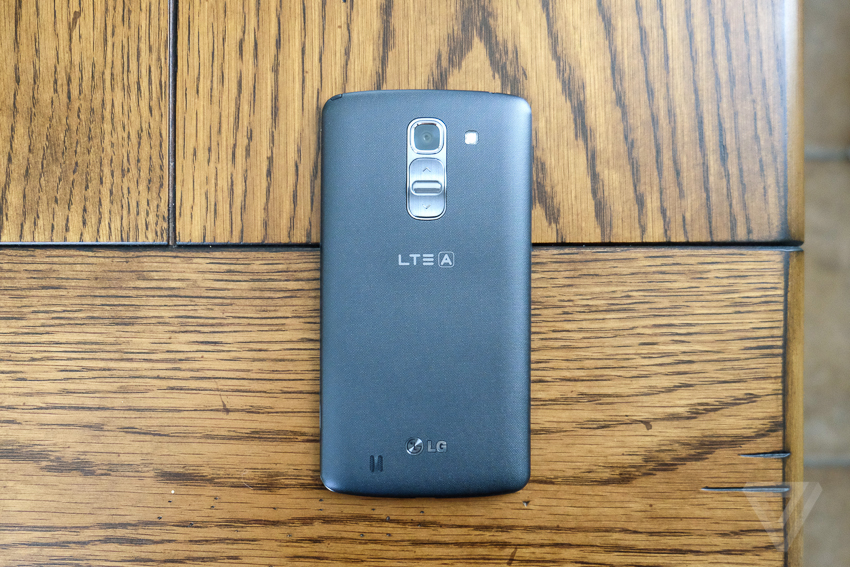 The G Pro featured a number of software tweaks that tried to take advantage of its big screen, and the G2 that came later added even more. The G Pro 2 has all of those software features and then some, though this time around LG gives you more control over what interface elements you want to put up with. It's possible to customize almost everything about the look of the software, including getting rid of the LG's space-hogging shortcuts and sliders. 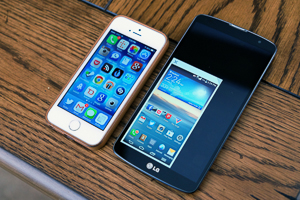 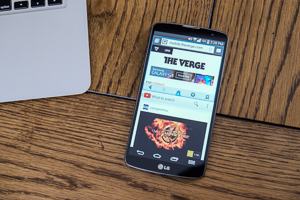 Most of LG's software enhancements try to make multitasking easier on the phone, but the majority fail. The Slide Aside feature, which uses a three-finger right-to-left swipe to "dock" apps for later use, never feels natural to use and frequently interferes with the native gesture controls in many apps.

There's a split-screen mode that lets you run two apps at the same time, and it actually does work, though I found it difficult to work into my everyday use of the phone. It's nice to be able to view a webpage and a YouTube video at the same time, but unless I was actively thinking about using the feature, I often forgot it existed.

And then there’s Mini View, LG's most dramatic software change for the G Pro 2. Designed to make it easier to use the phone in one hand, it’s a tacit admission that the device is just too large for human-sized hands. A left-to-right or right-to-left swipe along the virtual keys at the bottom of the screen will shrink the displayed information to the lower-right or lower-left corner of the screen. It's a fully interactive smartphone experience within the much larger experience of the G Pro 2, and it lets you navigate the software with just your thumb. (The shrunken-down area is, interestingly enough, almost exactly the size of the iPhone's 4-inch display.) But it doesn't feel natural to launch the Mini View and it's still pretty awkward to use the G Pro 2 in one hand even with it. There’s no way to shrink the actual hardware, which is the real problem.

The G2 debuted LG’s Knock On, a double-tap-to-wake system that let you completely forget that the power button was actually on the back of the phone. The G Pro 2 takes the idea a step further with Knock Code, which lets you secure your phone with a series of taps on the display. Tap the areas of the screen in the right sequence and the phone springs to life, get it wrong and it stays out of prying hands. It's a new play on the age-old PIN-code or pattern lock system, and it's fun to use and reliable. The G Pro 2 still takes longer to wake up than other phones with similar features, but most of the time it wasn't an issue for me.

There are other tweaks here and there: the G Pro 2 now runs Android 4.4.2 KitKat and the camera software has been updated with a few new features (including a "flash" mode for the front-facing camera, which is really just a white screen that's supposed to illuminate your face). But overall it's the same LG experience, and if you didn't like the software on the G Pro or the G2, chances are you're not going to like it here. I'm not really a fan of LG's software — I find it gets in the way of what I'm trying to do more often than not, and the enhancements on top of Android don't really make for a better smartphone experience. I don’t understand why LG has made no effort to add proper stylus functionality to the G Pro 2 — it’s one of the most compelling features about the Galaxy Note and it’s one of the few things that can actually make use of the massive displays on these devices. Otherwise, you’re just using a bigger smartphone with little real benefit in user experience. 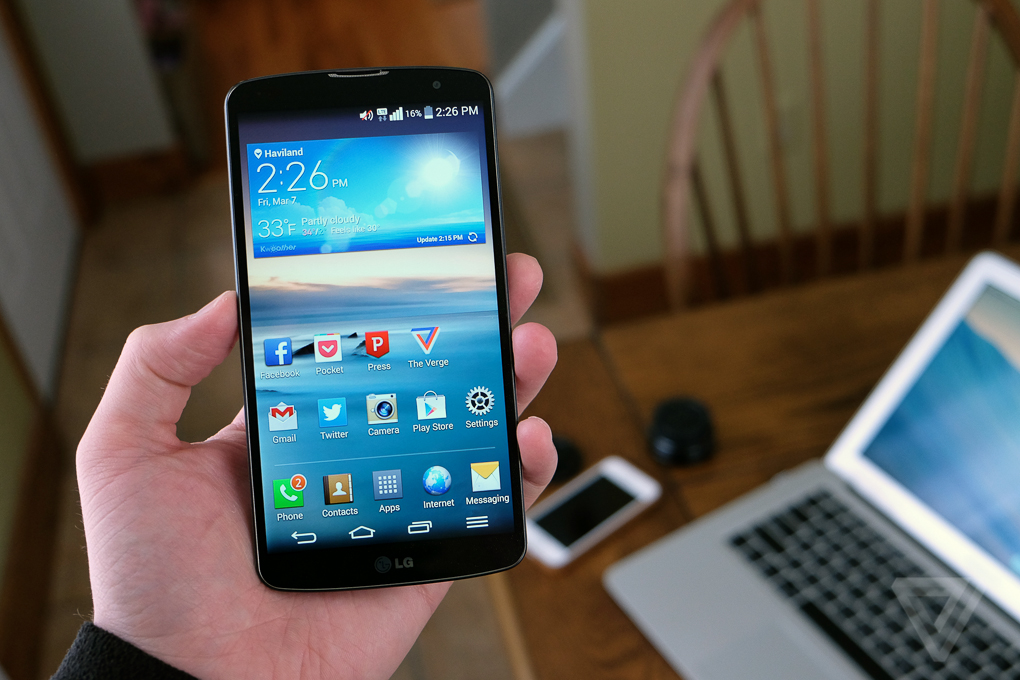 Our review of LG G Pro 2 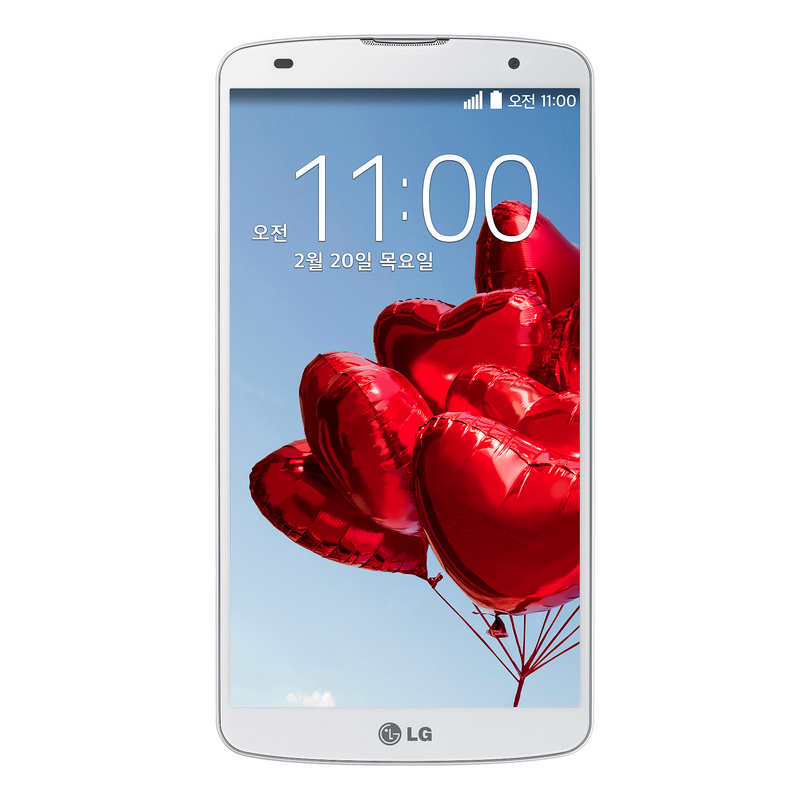 When iteration is the name of the game, it's easy to overlook the improvements that smartphone makers do introduce every year. The G Pro 2 is certainly an improvement over its predecessor — the design is much nicer, the battery lasts longer, and the display is even bigger without adding much to the phone's footprint. But it's still the same idea that doesn't really work for me: it tries to take the place of both a smartphone and a tablet, but compromises on both in ways that don't make a great experience for either purpose.

Perhaps that speaks to where we’re at with smartphones today. The days of complaining about awful performance, useless cameras, and gritty screens are generally behind us, and most every smartphone on the market is “pretty good.” The only real complaint many people have these days is battery life, and devices like the G Pro 2 address that with brute force — a bigger phone can utilize a bigger battery without requiring major leaps in battery technology. There’s little need to redesign the wheel when it rolls along just fine.

But that doesn’t mean that smartphone makers should stop trying. Samsung has been able to carve out a tangible space for its phablets thanks to the differentiator of the pen input on its Galaxy Note line, but LG hasn't really been able to copy that. The G Pro 2 is really just a bigger G2 that's even more difficult to use in one hand and fits in fewer jacket or pants pockets.

If you’re in the US or other Western markets, you have some time to stew over the G Pro 2 to decide if it’s for you — it’s only available for purchase in Korea right now and no American carriers have committed to offering it yet. But generally speaking, if you're convinced that a phablet is the right device for you, you're still better off with last year's Galaxy Note 3, despite the baby steps and iterative improvements LG has made with the G Pro 2.