Join the masquerade: Banter tries to reinvent the chat room

Join the masquerade: Banter tries to reinvent the chat room

At SXSW, one new app is betting message boards didn't die with dial-up

Andrew Busey and I met to talk about apps, but we’ve gotten off-topic. "I think there’s a possibility," he says between sips of a quad espresso, "that we see the emergence of true artificial sentience. Where something exists in an ecosystem that has been created, and it interacts in an intelligent way with other things in that ecosystem, and understands them and develops around them, and that creates intelligence… but it’ll be a sort of alien intelligence."

The idea is at the center of Busey’s as-yet-unpublished novel Accidental Gods, about two scientists who accidentally create a fully formed universe inside a supercomputer. He wrote it during a six-month break after two decades of entrepreneurial success, a resume that includes inventing iChat long before it was Apple’s primary messaging service, and founding a game company he eventually sold to Zynga. But soon into his sabbatical the impulse kicked back in, and he created a team to build Banter.

Banter feels like an AOL chat room, but it's something different

Banter is simple, like nothing so much as a message board or an old AOL chat room. Pick a username and password, join a room you’re interested in, and start talking. Some rooms are incredibly specific (one is exclusively about the beer options at SXSW), others have names like "Cuteness." The oldest post I could find in Banter’s "Funny Stuff" room was a picture of a woman holding a gigantic Samsung tablet to her head, captioned "Android Users Be Like…" The rest was a mix of weird jokes, mild misogyny, and memes. And pictures of boobs. And people asking for more pictures of boobs.

Every room is a loosely structured conversation about something, anything, full of tangents and asides and the occasional pseudonymous person just saying "hi." But it feels somehow immediate and personal; everything happening right now for only the people in the room. Banter’s designed to be that way, Busey says: "What we’re about, in the end, is enabling conversation." The app's most important feature may be that all public messages disappear after 24 hours, and there’s no archive or search. When we’re on Facebook or Twitter or even Reddit, he says, we shape what we say knowing it’ll be preserved, accessible, and tied to our reputation. But when we’re at a bar with friends, or chatting on the phone, we just talk. Banter is for just talking. 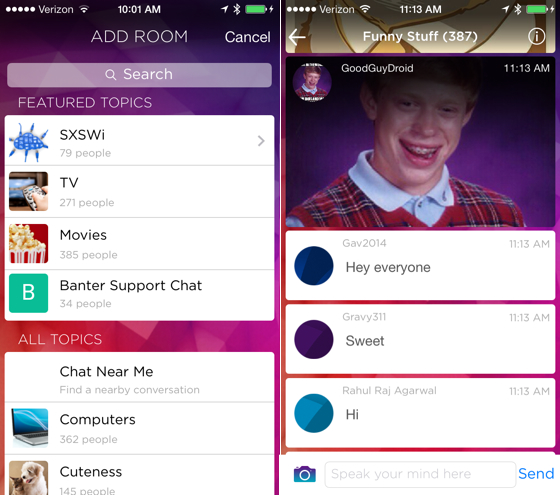 Busey compares Banter to games like World of Warcraft: interacting with other humans adds to the experience of the game, but it’s done entirely on your own terms — no one ever has to be anything other than the character they play, and that works just fine. With no consequences, he hopes people will be more honest and feel free to experiment. "I want them to care about not being assholes, preferably, but it’s not about ‘I have to constantly pay attention to what I say.’"

For all its clarity of purpose, however, Banter hardly feels like a focused app. It has private and group messaging, a terribly overwhelming stream view, location-based chat, and is full of goofy (and occasionally explicit) pictures. It’s easy to categorize it as Twitter meets GroupMe meets Snapchat meets Highlight meets WhatsApp meets the weirdest chat rooms from 1995, wrapped in a chat bubble and splashed on a polygonal background. It seems like the ultimate SXSW app, an almost cynical response to the success stories of years past.

In its first version, it’s just an app made of apps that is somehow less than the sum of its parts. It’s colorful and cluttered, with little distinction between rooms and features; there’s no real way to learn how to use Banter except to furiously tap on everything you can find and see what happens. Busey talks a lot about hierarchy and organization, but very little is obvious or even present yet.

"Who you are in real life is not important; what really matters is what you’re interested in."

Busey readily admits the app does too much, and says he’s just throwing things at a wall to see if anything sticks. But he swears his overarching goal is something entirely different. "I don’t expect to displace WhatsApp or Snapchat, I don’t view them as competitors." Then he pauses. "Who you are in real life is not important; what really matters is what you’re interested in." 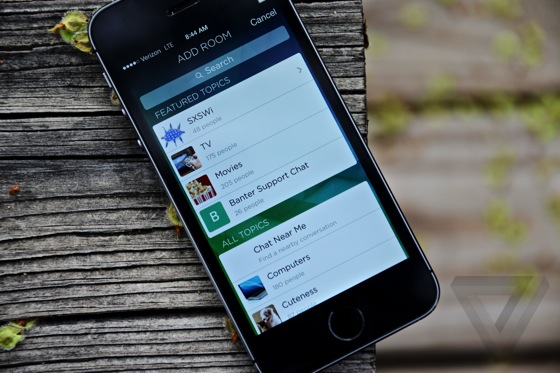 "If you’re at a dinner party," he says, "that’s when you have a philosophy conversation. Or there’s a party where all you want to do is talk to as many people as possible. Or there’s a sports thing, where you’re just cheering for a team and watching things happen, and the fact that there are other people around you just amplifies the energy." Where Twitter tries to be all things to all people all in one place, Banter offers a way to be as many different people as you like, in discrete social settings, within the same app.

Enabling these conversations requires a careful balance, different in every situation. "In some cases," he says, "high message velocity is good — it’s more about the shared experience. There the velocity is high and the quality of conversation is low, and that’s okay, but if you’re in a cancer support group you probably don’t want that." Banter has a one-tap way to boot a troll from a room, and simple ways split a large room into several manageable ones. Busey’s also hiring a community management team, which even after four days seems to already be long overdue. Eventually he plans to charge a small fee for users to have more precise moderation powers, too — that’s actually the only monetization plan he’ll talk about.

When nothing you say lasts forever, the dynamic changes

Busey himself is a dedicated gamer who lit up when telling me about his travails with GPU cards and 4K gaming, but says he has few people in his life who care. He also has a lot of thoughts on God and religion he’s eager to discuss. He’s clearly thrilled to have a place to just be Philosopher Andrew or Gamer Andrew without worrying about what it all means for Andrew.

I mention to him, as we sit in the office he shares with creative agency Chaotic Moon, surrounded by iMacs and Red Bull, that virtually every other social network is obsessed with owning your identity and being the truest version of you. "We don’t give a shit about that," Busey says. "You’re just talking to people."