Instagram has always set a high bar for speed. While other photo apps add feature after feature, Instagram's updates generally come in the form of "Bug fixes and performance improvements." Instagram's latest update for Android, launching today, takes the same approach but on a much larger scale. The company halved the size of its Android app, doubled the speed of profile loading, and redesigned its entire experience to both look nicer and perform better — especially on some of the more popular phones in growth countries like Brazil. And that's the goal of today's update: to juice up global expansion.

The first thing you'll notice upon trying the new app is its redesigned camera screen and updated iconography, which better fit in with a comprehensive update the company released for iPhone back in September. Since launching its Android app back in April 2012, Instagram has kept it mostly in line with its iPhone version, but adapting the app for an increasing number of Android phones has been difficult, says engineering manager Philip McAllister. Instagram is now fully customized for phones like the Samsung Galaxy Y, one of the most popular phones in Brazil. "It looks phenomenal on a low resolution device," says McAllister. "[This is] definitely one the more laborious things we've done, but it's also one of the greatest aspects of the Android platform — the software is so open that it runs on large devices and small devices." 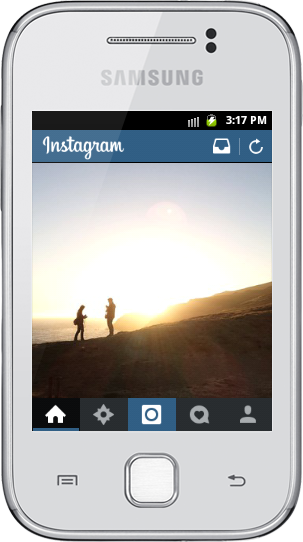 Up to now, Instagram followed default Android behaviors for scaling to different screen sizes, but for its latest update, the company actually tested its apps on a variety of devices that aren't sold in the US. "More than 60 percent of our users are outside the US, and Android covers roughly half of total Instagram users," McAllister says. Instagram's new app boots up 20 percent faster on many devices, but hardware is still only half of the equation. Instagram cut the size of its app in half by removing stock assets for buttons and graphics and replacing them with "programmatically" defined images (which change when you tap on them). Now, Instagram can be downloaded cheaper and faster in places with limited access or expensive data plans.

Instagram 5.1 for Android doesn't include any new features. The company's last big feature launch was Instagram Direct, which lets users share photos privately with up to 15 friends. Instagram wouldn't comment on how many users are sending Direct messages, but said that it's "very happy" with the feature's performance thus far.