Failure to launch: why startups are using SXSW as a testing ground

Failure to launch: why startups are using SXSW as a testing ground

Secret looks for a new way to win in Austin

In March 2007, Twitter became the breakout hit of the South By Southwest Interactive when attendees used the service to discover hot parties and connect with friends at the festival. Two years later, Foursquare replicated the feat, introducing the world to the check-in and giving rise to location-based services. It was only natural that SXSW is the place where Twitter and Foursquare took off — the festival attracted a then-rare concentration of smartphones and the tech elite who used them, giving big new ideas a singular place where they could take root and spread when festival attendees returned home.

In the wake of those successes, an optimistic tech world has descended on Austin, Texas each year in search of new breakout successes. But 2010 came and went without a notable success. The 2011 festival was keynoted by the CEO of SCVNGR, a mobile take on the scavenger hunt that failed and pivoted into a QR-code-based mobile payments company. In 2012, "people discovery" apps like Highlight took center stage, but they struggled to maintain their momentum after SXSW ended. The festival attracts more attention than ever, with some 70,000 people expected in Austin this year for the nine-day celebration of tech, film, and music. But there hasn’t been a true breakout hit here in five years. So why is Austin still crawling with startups?

Why is Austin still crawling with startups?

David Byttow and Chrys Bader, founders of the "anonymish" social network Secret, offers a clue. Secret, which offers a feed of gossip from your contacts with the author identified only as "friend" or "friend of a friend," became the talk of Silicon Valley when it launched last month. Secret’s approach to attending the festival this year indicates that if it can’t work as a launch pad, it may still be effective as a test bed for new features.

In the past, Secret would have been the sort of app you would expect to see all over SXSW, handing out schwag on street corners and hosting a private (secret!) party for festivalgoers at night. Byttow and Bader considered all of those approaches, and polled vendors on how much they would cost. In every case, schwag and events cost more than they expected. And having seen apps’ experiences at SXSW over the past few years, the costs were difficult to justify.

At the same time, an appearance at SXSW still offered the young app a chance for a moment in the spotlight. Both Byttow and Bader had been invited to speak at panels, and more importantly, they had a festival-friendly idea they wanted to try. Whisper, the first anonymous sharing app to gain popularity, had gained traction by sharing confessions based on proximity. Secret’s appeal lies in the fact that many messages come from your real-world social network. But proximity can be a powerful signal as well — and SXSW was a perfect place to try it. 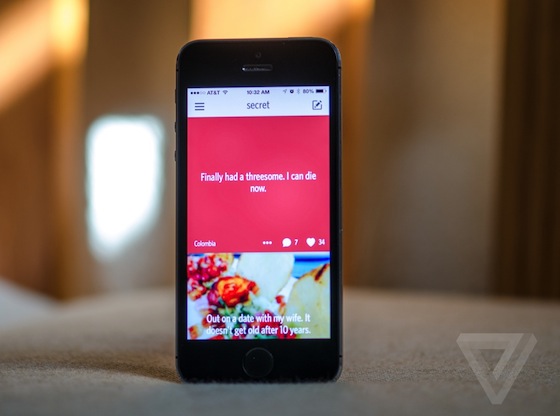 And so Byttow and Bader booked a flight to Austin, where they spent nearly all their time coding in their hotel room. On Friday, they published an update that gives users the option to see messages posted around them. Location is only one signal the app takes into account when choosing what to show you — it first looks for posts popular in your network. But when a message starts gaining traction in your network, and that message was posted within a few miles, Secret surfaces it and tells you roughly how far away the sender was when they posted.

Suddenly, if someone at SXSW figured out a secret way into a hot party, that person could share their knowledge while staying anonymous. "We’re hoping that it’s going to be really interesting," Byttow said Saturday, in an interview with The Verge. "Secret can be kind of a back channel, or an undercurrent of discussion, in any industry, or at any event. We wanted to see how it plays out in a very localized environment — and where we can do better." They also set up a web feed of secrets posted from the festival, giving non-users a public place to see what they have been missing. And a new sharing feature made it easier to post messages to Facebook, Twitter, SMS, and email.

"Secret can be a kind of back channel."

A few days later, has Secret broken out? It doesn’t feel that way, at least among the festivalgoers I’ve spoken to. The analytics firm AppAnnie suggest that the app’s ranking in the App Store has inched upward over the past few days, but the effect has been modest at best. Still, the founders say they are not worried. "We haven’t focused on growth at all," Byttow says. Instead they’ve been working on the product itself, along with fundraising. Byttow said a recent Wall Street Journal report that they had raised as much as $10 million is inaccurate, but declined to say whether they were raising more or less. In any case, he said, the round has not closed.

But better to raise money while they have the world’s attention. Secret remains a popular app in Silicon Valley, but it remains unclear whether it will be able to break out of the bubble. All the more reason, says Bader, to conserve money that their predecessors spent handing out T-shirts in Austin. "We want to be in people’s pockets," Bader says, "not the trash can."