Razer's new Blade might be the perfect gaming laptop

Razer has clearly been listening. Two years ago, we practically panned the company's first laptop. But today, just three models later, the company's new 14-inch machine is promising nearly everything we asked for. Compared to the 14-inch Blade we loved last year, not a lot seems to have changed. Razer's using the same external chassis — just a tiny bit thicker at 0.7 inches — with the same keyboard, the same speakers, even the same Core i7 processor inside its frame.

But now, our primary criticisms have been addressed: that garish low-resolution 1600 x 900 display has been replaced with a crazy high-res 3200 x 1800 IGZO IPS screen that's incredibly crisp, with far wider 160-degree viewing angles, less color shift, and which the company says is responsive enough for gaming. "People were calling for us to bring a 1080p screen to market, and we think we've crushed that," says the company.

It's also a 10-point touchscreen to accomodate Windows 8, which accounts for the extra thickness, but Razer's balanced the hinge so you can still open the lid with a single fingertip. Plus, both the cooling system and the touchpad buttons have been refined to make the chassis friendlier to those fingers, as last year's model got uncomfortably warm and its buttons were slightly stiff. 802.11ac Wi-Fi now comes standard. And then there's the one upgrade we weren't expecting: a far faster Nvidia graphics chip. Not only does the machine upgrade to Nvidia's latest GeForce 800M graphics, just announced today, but the company picked a higher-class GeForce GTX 870M chip with 3GB of dedicated memory for the new 14-inch Blade. That should make for significantly faster gaming than last year's model. We saw it run the Sleeping Dogs benchmark at 3200 x 1800 while maintaining roughly 50 to 60 frames per second, and things look even rosier when playing games at 1080p resolution: 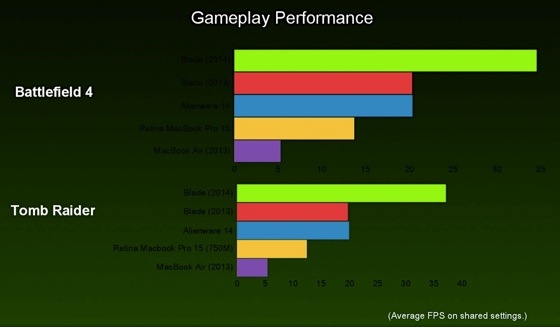 And yet, the company says the laptop should still get six hours of battery life for productivity and 2 to 3 hours of "hardcore PC gaming." No word on whether that number includes Nvidia's new Battery Boost tech, but we're eager to put those benchmarks to the test. So far, the only giant caveat we're seeing is price: the new 14-inch Blade now starts at a $2,199 with just 128GB of storage, a $400 premium compared to last year's model. More storage can be had in $200 increments, which brings the price of a Blade that can actually fit a collection of games to $2,399 or more.

No crazy upgrades for 17-inch model

Strangely, the 17-inch Blade Pro isn't seeing nearly as much of a bump as its smaller sibling, and will actually come with a slower GeForce GTX 860M GPU. Razer told us that was the right fit to stay with the same matte 17-inch 1080p screen without sacrificing battery life, with Razer CEO Min-Liang Tan calling it the "ideal balance of work and play" for "creative professionals." Still, the GPU's new Maxwell architecture should still deliver roughly 40 percent performance improvements on average over last year's similarly numbered model. The 17-inch laptop will also double the memory to 16GB at its $2,299 starting price, and include new apps for its integrated Switchblade UI, a touchscreen that lies underneath the touchpad alongside special LCD keys can be customized with various functions.

The Blade Pro ships today, while preorders for the new 14-inch Blade will start shipping in two weeks.