Spec Sheet: Roku and Chromecast battle behind your TV

Spec Sheet: Roku and Chromecast battle behind your TV

At SXSW 2014, Google Chrome and Android SVP Sundar Pichai spoke for the first time about the success of Chromecast, saying the $35 dongle has sold "millions" in the US and that Google wanted to bring it to other countries soon. It’s not surprising, since Chromecast did sell out for weeks on Amazon when it was first released in mid-2013 and continues to the top best-selling item in consumer electronics. It’s easy to forget that Roku had a streaming stick well before Google had Chromecast, but now Roku is back with an updated version of its streaming stick, and it’s out to steal some of Chromecast’s thunder.

The original Roku stick was only compatible with TVs that had a Mobile High-Definition Link (MHL) port. Now both the new Roku Streaming Stick and the Chromecast connect to any TV through their HDMI dongle hardware, and they both require power from either a USB port or from an outlet via an adaptor. Things start to differ in the initial setup: you have to connect the Roku stick to Wi-Fi or Ethernet and then sign in to your Roku account on your computer to set up the stick. It’s a quick process, but Chromecast requires even less setup — just plug it into the television and install the Chromecast extension to your browser to cast, or use the Chromecast button in one of its compatible apps. 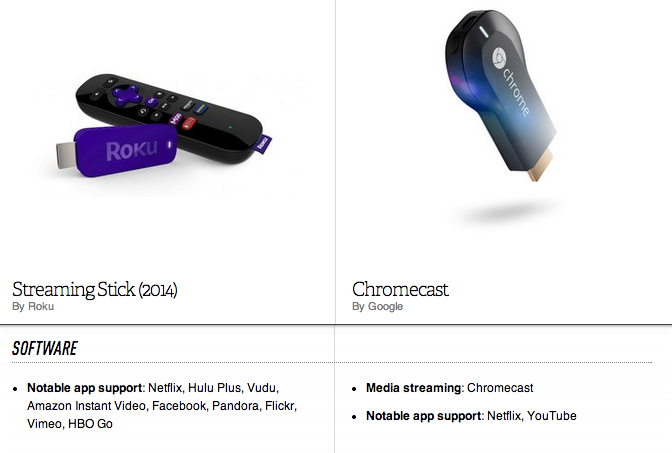 Click above for full specs on both streaming sticks.

How you set up each device is directly related to its interface— or lack thereof. You need to link your Roku account to the stick so you can see and access all the apps you’ve downloaded and install more using the included remote. The UI has Roku’s traditional purple framework and functions just like the Roku 3 set-top box: browse through all the apps you have, choose what to watch, and off you go. In contrast, Chromecast doesn’t have a UI at all — or a remote, or anything else. It’s a glorified adaptor that takes minimalism to the extreme. Other than a few settings in the Chrome browser you can change, you’re left to use the button to cast what you’re watching on your computer or mobile device to a TV.

Channels are where Roku shines compared to Chromecast: the service has accumulated over 1,200 of the most popular (and the most obscure) video and music channels. There are the usual suspects like Netflix, Amazon, and Pandora as well as unusual offerings like The Yachting Channel and Hypnosis TV, and you can add them all with just a few clicks on the remote. Currently Chromecast has about 14 channels that are compatible with the device, and it’s actually just a feature within existing apps that gives you the option to connect and stream to Chromecast. Searching through the Google Play Store will show you Chromecast-ready apps — Amazon isn’t on there yet, but Google has secured some big providers like Netflix, Hulu, and HBO Go. It's also easier to get movies on Roku's stick because it lets you rent and purchase movies directly within its interface; you’ll have to go through Google Play first to get movies for Chromecast. 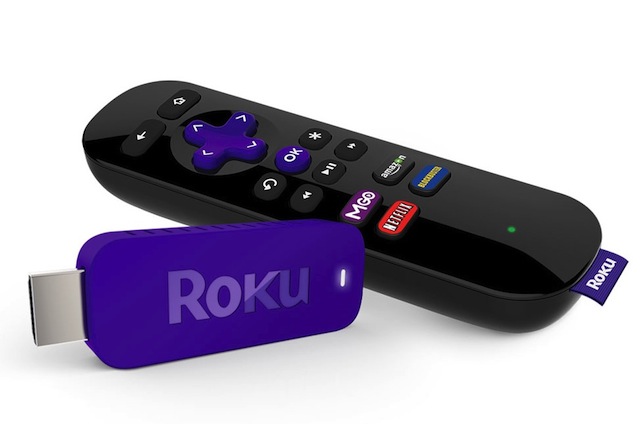 But where Roku excels with content, Chromecast succeeds in simply casting. Aside from the services that are compatible with the device, Google’s dongle can stream anything from a web browser in real-time to your TV. It’s an entertainment device, but since you can do more than just watch videos or listen to music, it has potential as a productivity device. It could be a way for you to show a presentation on your TV screen, or show a slideshow of photos from Flickr — if you can do it in a web browser, you can stream it with Chromecast.

And Google wants it do more: the company pushed out an SDK for developers to add Chromecast support to their apps, which is not something Roku is likely to do. Currently the Roku stick only has screen-casting functionality on YouTube and Netflix, which maintains its focus on entertainment content, but is still lacking compared to Chromecast’s capabilities in this realm. It is possible that the company’s content partners will update their mobile apps to allow streaming to Roku’s stick, but that will take time.

Their prices are close, yet so far away

Finally, there’s price: Chromecast’s $35 price tag has been luring people in since it debuted, and Roku’s stick is priced at just about $50. For some reason, there’s something about $35 that makes it an easy Add-To-Cart choice, especially if you want to get more than one Chromecast for multiple TVs. But the extra $15 spent on the Roku Streaming Stick gives you access to a succinct, one-stop-shop of entertainment that currently Chromecast doesn’t provide. However it’s worth noting that those prices are just for the dongles — you’ll still need subscriptions to channels like Netflix and HBO Go to view any content.

We knew what Roku wanted its streaming stick to be from the start: a cheaper, more compatible version of the original stick that presents all the content channels you want and need in an easy, clean experience. It seems to have done that, even without advance browser-streaming capabilities. But even as Roku releases the stick as a Chromecast competitor, we still don’t really know what Google wants its streaming stick to be. Chromecast entered the market as a way to put what’s on your browser onto your TV, but as far as we know Google isn’t rapidly pushing for more partner apps to beef up its entertainment offerings. And similarly to Google Glass, the released SDK gives developers the reins to potentially turn Chromecast into something else — it’s too early to say what that could be, but for now Chromecast has some strong competition in Roku’s streaming stick and we’ll have to wait and see how (and if) Google’s little dongle changes in the future.

If you want to learn more about any of the products mentioned above, all of our information on them can be found through the database box located beneath the article. For more on media streamers and just about every product around, you can check out the full Verge Database right here.