Then and now: life in a divided Ukraine

As attention shifts toward Crimea's referendum, Ukrainian activists look back on the months that changed their lives

Share All sharing options for: Then and now: life in a divided Ukraine

In April 1977, Ukrainian activist Myroslav Marynovych was arrested by Soviet police. He was 28 at the time, and had become an outspoken advocate for human rights, working to raise awareness about ongoing violations in what is now Ukraine. In the eyes of the Soviets, though, his work threatened to undermine state order and it carried a stiff sentence: seven years in a gulag labor camp, followed by five years in exile.

Today, Marynovych works as the vice rector of the Ukrainian Catholic University in Lviv, a cosmopolitan city in western Ukraine. It's a far cry from the hardships he endured in the Perm-36 gulag, but his political passions still burn strong. And when protests broke out in Kiev's Maidan square late last year, he felt he had no choice but to join.

"When we all saw on TV how the special police troops tried to destroy Maidan, beating students mercilessly and heavily, I decided I had to go and stand there," Marynovych, 65, said during a phone call last week.

"The atmosphere has changed fundamentally."

His stay in Kiev was short — "It got cold. I am not so young anymore." — but the demonstrations were not. Thousands of Ukrainians descended on the capital in November to protest against President Viktor Yanukovych's decision to reject a trade deal with the European Union and to forge closer economic ties with Russia. After deadly clashes between protesters and police, Yanukovych is now in hiding, Crimea is holding a disputed referendum today to decide whether to join the Russian Federation, and a new government is slowly taking form as Ukraine's future hangs in the balance.

"The atmosphere has changed fundamentally," says Bishop Borys Gudziak, 53, president of the Ukraine Catholic University and a friend of Marynovych's, who spent two weeks praying with protesters behind barricades at the Maidan. "The country and its people are in a time machine: an hour is like a week, a week... like a decade."

For Gudziak and other protesters, the last few months have been a political and emotional whirlwind as the elation felt after Yanukovych was ousted in February has since given way to a deeper sense of unease. Despite strong warnings from the US and its allies, Russia continues to tighten its grip over Crimea — home to a majority ethnic Russian population — and the regional parliament has moved to declare independence from Ukraine and join the Russian Federation, pending today's vote. The US and Kiev have both said that they will not recognize the results of the referendum, describing it as illegal. 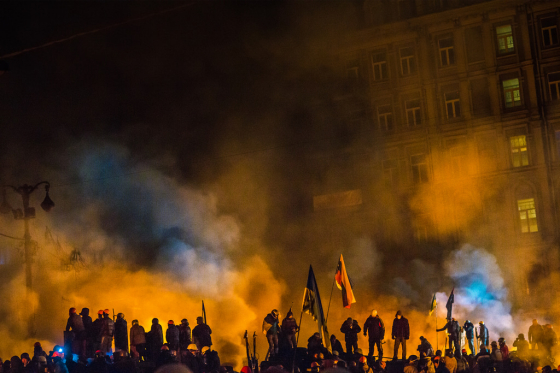 Moscow has gone to great lengths to discredit the revolution in Ukraine, describing the movement as a coup staged by fascists and ultranationalists, while insisting that the Kremlin must protect the ethnic Russians who live primarily in the southern and eastern regions of Ukraine. Marynovych acknowledges that there are some ultranationalists involved in Ukraine's revolution, but he says their role and perceived threat have been vastly overblown by state-controlled Russian media, dismissing Putin's basis for invading Crimea to protect Russian interests. His fear is that Russia is using the same strategy it deployed in 2008, when it effectively annexed two Georgian territories after invading.

"It is very exhausting to live in a constant state of conflict."

There's no denying that Ukraine remains divided. The country's eastern region has stronger cultural and historical ties to Russia, while its western region leans more toward Europe. Russia expert Dmitry Gorenburg, a senior researcher at the nonprofit think-tank CNA, points out that although a sizable number of representatives from the eastern region did vote to oust Yanukovych, they remain fairly underrepresented in the government taking form in Kiev.

Kiev resident Maria Oleksevich says there's a palpable sense of concern today in the capital, where many activists fear that further Russian encroachment could reverse the gains they made following Yanukovych's departure. "My friends say: we have kicked Yanukovych out of the country, so we can expel Russian invaders," says Oleksevich, 22, who leads the media department at furniture design firm ODESD2. "But subconsciously, there is a fear that everything can happen again. It is very exhausting to live in a constant state of conflict."

Oleksevich and her friends played an active role in last month's protests, bringing clothes and medicine to the Maidan and suspending their design projects to follow the developments ("Who can be interested in a new designer commode when people die?"). She says things are a lot calmer in Kiev now, though they're still not quite normal. Flowers and wreaths fill the city square, serving the memory of those who died there, and economic difficulties continue to plague local businesses. The value of Ukraine's currency plummeted after unrest broke out, making it more expensive for Oleksevich's firm to purchase materials, though she says they've taken a new sense of pride in making their products in Ukraine, and she hopes others will follow.

"I have not really left the Maidan."

Overall, the atmosphere Oleksevich describes is one of muted calm, as Kiev recollects itself and looks forward. "No one is ready to do something loud and entertaining even now," she says. "Memory is too fresh, and the fight is not over."

Despite the cultural divisions and lingering uncertainty, Gudziak seems cautiously optimistic about the future. This period, he says, marks "a unique time of national unity" in Ukraine. "Civilians bring food to Army units under siege, people from different parts of the country write supportive letters... people are straining to preserve the sovereignty and integrity of the country."

His memories from the Maidan won't fade away, either, regardless of what happens after today's referendum. In February, Gudziak was in a nearby chapel tent when special forces opened fire on protesters. He rushed out to the stage to implore the officers to stop, reading a statement from the archbishop of his church. When he turned around, he saw that the chapel was in flames.

"I have not really left the Maidan," Gudziak says. "It remains in my heart, in my thoughts, and in my dreams and nightmares."