Samsung's NX Mini aims to be the ultimate selfie camera

Samsung's NX Mini aims to be the ultimate selfie camera

Samsung just announced the NX Mini, a new addition to its growing portfolio of mirrorless cameras. It's a device that the company hopes consumers will take with them anywhere and everywhere. And that shouldn't be a problem — at least when it comes to size. "This could easily fit into your pocket," is a popular line among Samsung executives when describing the camera.

That's especially true thanks to a minuscule 9mm f/3.5 (24mm-equivalent) lens that is one of two kit options for the 20-megapixel camera ($449); the other includes a new 9-27mm (24-73mm-equivalent) zoom lens and external flash ($549). The camera itself features a 1-inch sensor, the same size as found in Sony's RX100 and Nikon's 1 series, which also helps to make it among the thinnest on the market at 0.88 inches.

That portability led Samsung to place a major focus on style; the NX Mini comes in five colors including white, black, brown, mint green, and pink. The company is even rolling out a carrying case so customers can easily carry the 9-millimeter and 19-27 lenses together. A 17mm f/1.8 lens will arrive later in the Spring. Unfortunately, unless you're willing to pay more than $100 for an adapter, you'll be limited to those three lenses for some time. Since the NX Mini uses a different mount than Samsung's other NX cameras, the company's existing array of glass won't fit the Mini out of the box. To be fair, sticking some of Samsung's larger lenses on the Mini can get frankly comical, and it immediately ruins the camera's sleek form factor, as seen below. 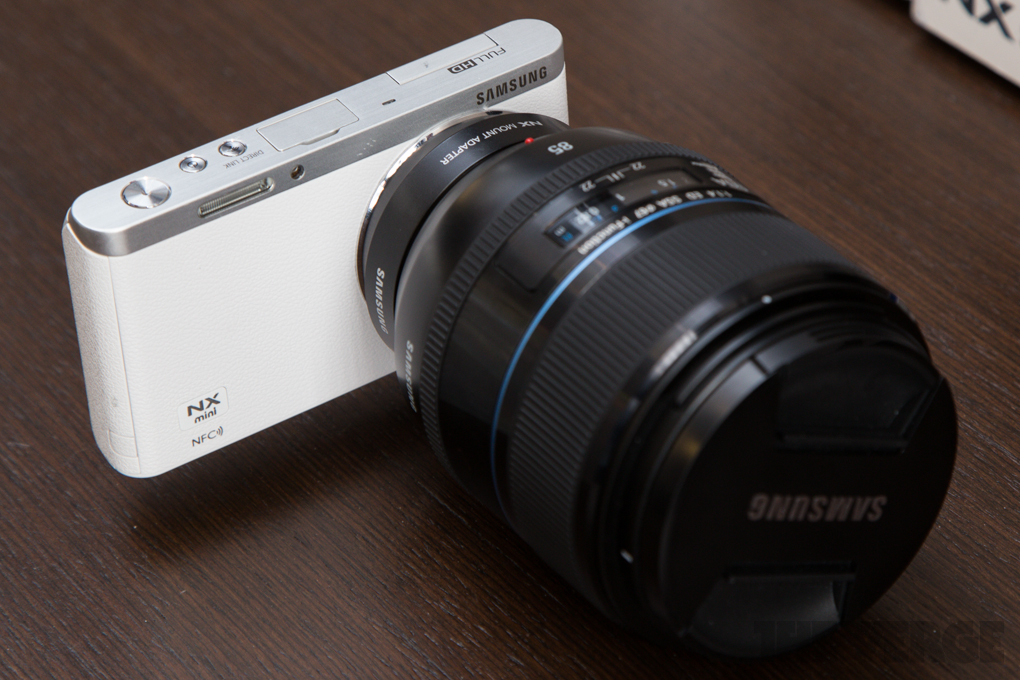 And Samsung has loaded up the NX Mini with a seemingly endless list of smart shooting modes, Dropbox / Flickr uploading, and add-ons like NFC, Wi-Fi, and of course a 180-degree flip-up display. When connected to a local network, this camera can even serve as a baby monitor. So no, it's not meant to compete with "serious" cameras. But it's a step above your cellphone's camera, and Samsung hopes that will be enough to rope in many customers. The NX Mini is slated to launch in the US this April.