Sony has revealed its plans for virtual reality technology on the PlayStation 4. Shuhei Yoshida, president of Sony Worldwide Studios, showed off a prototype headset at a Game Developers Conference 2014 event entitled Driving the Future of Innovation. "Nothing delivers a feeling of immersion better than VR," said Yoshida. "VR has been a dream of many gamers since the computer was invented. Many of us at PlayStation have dreamed of VR and what it could mean to the gaming community."

"Nothing delivers a feeling of immersion better than VR."

The VR system is currently codenamed Project Morpheus, and will work with PlayStation 4. While still in prototype form, Yoshida says that Morpheus is the "culmination of our work over the last three years to realize our vision of VR for games, and to push the boundaries of play." The headset uses a 1080p LCD, offers a 90-degree field of view, and will integrate with the PlayStation Camera for tracking and PlayStation Move for motion control. It connects via HDMI and USB; while the current prototype uses a 5-meter cable, Sony would like to make it wireless. The company says the headset doesn't put weight on your nose or cheeks, and its design allows for airflow without the lenses fogging up. 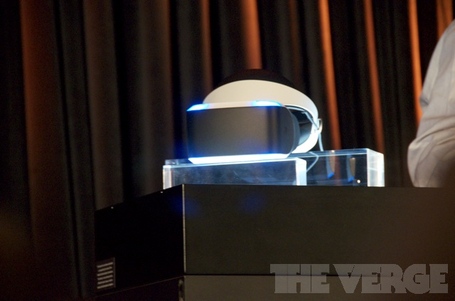 "VR is going to be pervasive."

Sony Magic Lab's Richard Marks, who pioneered the EyeToy camera and PlayStation Move, joined Yoshida on stage to offer further details on Project Morpheus. "The thing that makes VR special is really the feeling of being in another place... there's no way to explain it to you that will make sense, but it's that feeling of presence," he said. "VR is going to be pervasive, and what I mean by that is it's going to be used for all sorts of things you might not think it would be used for." As one example, Marks says he's been working on a project with NASA and its Jet Propulsion Lab that will allow PS4 owners to feel like they're right with the space agency on Mars.

Marks has identified six areas that Sony needs to crack in order for VR to work: sight, sound, tracking, control, ease of use, and content. For sight, Marks refers to Sony's considerable weight in optics and imaging technology. For sound, the company is working on 3D binaural tech to aid presence and immersion. For tracking and control, Marks says the PlayStation Camera and PlayStation Move are ready-made solutions. For ease of use, Sony plans to make it a comfortable, plug-and-play experience. And for content, Marks showed a long list of software partners including Epic Games, Crytek, Autodesk, Unity, and more. Sony will be showing demos of Thief, EVE Valkryie, and more running on Project Morpheus at GDC. 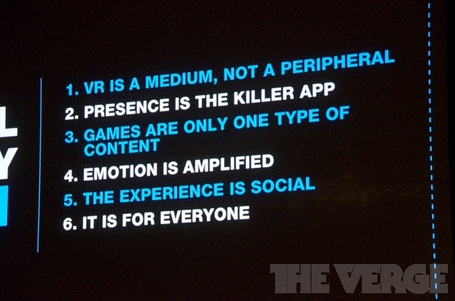 Although VR is yet to turn up a viable consumer product, the concept has been gaining momentum ever since Kickstarter-funded startup Oculus VR showed off its first headset, the Rift, in 2012. The company demonstrated a more refined Oculus Rift prototype, codenamed Crystal Cove, earlier this year, with more contenders set to join the fray. Valve is working on similar VR technology of its own, and Microsoft has explored augmented reality glasses, known as Project Fortaleza, that would work with the Xbox One's Kinect sensor.

Sony's announcement today, however, marks the first serious effort from a first-party platform holder, and could prove the most attractive option yet for VR developers. "We have seen passionate people at Oculus VR and Valve introduce VR prototypes and share their learnings," said Yoshida. "I have an enormous amount of respect for them. This shows how all of us as an industry can rally around a new medium like VR to push gaming forward." No release date is set for Project Morpheus, but Sony plans to make an SDK available to developers in the near future.

Update: Sony has confirmed to The Verge that Project Morpheus will not be made into a consumer product this year. The company isn't yet revealing when a finished product will arrive. The prototype shown at Game Developers Conference will be used to help familiarize Sony's developer partners with the VR technology.