The story of Motorola's smartwatch from the man who designed it

The story of Motorola's smartwatch from the man who designed it

Eventually they just made a watch.

Motorola design chief Jim Wicks and his team had spent a year and a half designing the device that would ultimately become the beautiful Moto 360 smartwatch, but every initial result was lacking. "Every time you do one," he tells me, "no matter how awesome you might think it is, if it’s square, everyone’s just kind of like ‘ehhh...’ And you sit there and you think about making it a little bit thinner, or a little bit bigger, a little bit heavier — you work for all those things and you still get that kind of feeling. And then finally we realized we’re not going to break through that ceiling, even with our peers, if we can’t get out of the ‘eh’ zone."

After two rounds of designs, prototypes, and tepid internal reactions, Motorola went back to the basics. Rather than reinvent wristwear or build a blocky rectangle like the Galaxy Gear or the Pebble Steel, Motorola decided to mimic what it hoped to replace: the elegant watches we’ve had on our wrists for decades. "We came to the realization that if we’re going to do this, we need to really embrace what this space is all about," he says. So Motorola turned the Moto 360 into a beautiful, circular stainless-steel wearable that looks more like a Timex than a Moto X. Wicks says it got the same reaction from all the industry experts he showed it to: "Yep, that’s a watch." 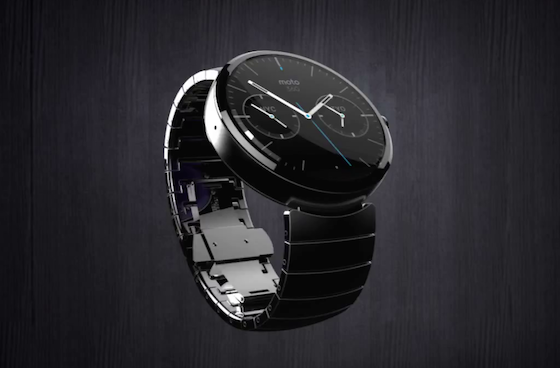 Smartwatches are complicated enough without messing with the look

There are still more questions than answers about the Moto 360. Wicks was tight-lipped about battery life, the particulars of the software and user interaction, and even the diameter of the watch face. ("It’s not large, but it’s not small, either" was as specific as he’d get.) One thing he’s not shy about is Motorola’s ambition: the 360 isn’t for nerds or early adopters. It’s for everyone. And since it’s already going to ask people to learn to talk to and swipe on their wrists, Motorola kept the form factor as simple as possible. "It goes into a familiar space," Wicks says, "and it does it in a way that allows you to replace something you have now or something you gave up before with this new device, which is both emotionally and culturally familiar."

Motorola’s Android Wear smartwatch is made to gently ease us into the future by keeping one foot firmly rooted in the past. In a way, Wicks says, even the interaction won’t feel totally new. "This device is made to function as a watch on your wrist the way a watch would. To not just look that way, but to work that way for people." It starts with simply showing the time: "Our goal, I’ll tell you, is that when I’m sitting here and I lift up my watch to look at it, I’ll see the time." He pauses. "Unless there’s something else that’s more important for me to see."

With Android Wear, there’s plenty more to see, which is where Wicks hopes the 360 will become much more than just a clock. "If you talk to people in the watch industry, they say people use watches as jewelry and fashion. They don’t use it to tell time — they use it to know what’s next or how much time they have left. I think what you saw in Android Wear was really communicating some of those things. Planning ahead, letting you know what’s going to happen so you don’t have to."

Most of the onus for that is on Google, of course. The Google Now-like platform is all about cards and gestures, quick glances and interactions with your phone. But just as Wicks loved the Touchless Control in the Moto X, he’s most excited about the Moto 360’s voice interactions. He says it’s a natural use, because we’ve actually always talked to our watches in some way. "The words you said to a watch in the past were just ‘oh shit I’m late,’ or ‘I have 10 minutes to get to my train.’ It’s nice that the whole vocabulary towards your watch now can change, from ‘oh shit I’m late’ to ‘navigate home,’ or ‘what’s next?’" 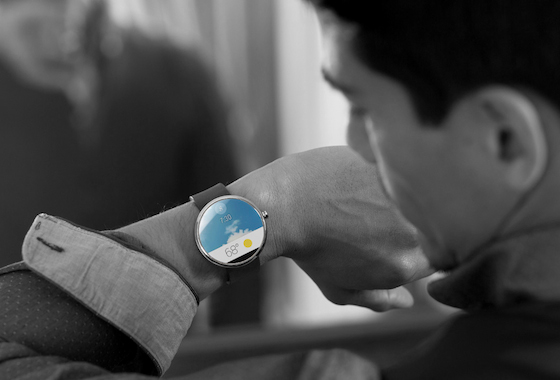 Motorola’s goal, he says, was to make hardware that gets out of the way of that. "We really focused on the watch face: let’s make that dial, so to speak, the hero. And we tried to reduce everything else to its purest form, so it’s the most iconic that it can be, but not to the point where it turns into a brown, Dieter Rams-like super-simplified kind of thing." He still takes care to point out the watch’s details, though: the brushed or polished finishes, the parting lines. "It makes it very iconic in nature," he says, "but also has kind of an approachability and a softness with the body."

Many of the 360’s key components are cribbed from other Motorola projects: Wicks says his team learned about power management from the ill-fated MotoACTV fitness tracker, and the Moto X’s voice-activated Touchless Control system that allows you powerful two-way conversation with your device. In fact, Motorola was working on the Moto 360 before it even knew about Android Wear. "It was perfect timing," Wicks says. "The cool thing was the area we were looking at and the approach we were taking actually resonated really well with what Android Wear was doing. So we were really quite surprised, when the time came that they started to communicate with all the potential vendors, that there was an opportunity there."

Having shown little more than renders and videos, Motorola has a lot left to say before the Moto 360 comes out this summer. When I asked why Motorola didn’t include a camera or some of the other features from the Galaxy Gear, he replied only, "Well, I think there’s going to be a lot more that you see — we haven’t laid out everything that we’re doing yet." Wicks did allude to easily replaceable watch bands for the device, as well as a Moto Maker-style customization option. But making a beautiful smartwatch is not the same as making a good smartwatch. The execution is the hard part, and as great as Motorola’s promises seem, they’re still just promises.

Wicks doesn’t seem worried — he says Motorola took the hard road and wound up better for it. "The normal thing to do is take the technology that exists," he says, "and create something based on what you technically can do. We took a different approach, and said, ‘Okay what do we think this should be?’ Then we figured out how we could achieve it." The idea is right, as good as even any smartwatch concept yet — but getting it on to our wrists is another story. And the clock is ticking.