One year ago today, Oculus introduced the first version of its prototype virtual reality headset that wasn't literally held together with duct tape and glue. The $300 Oculus Rift Development Kit showed the world that inexpensive VR headgear was capable of being mass produced. Now, at the 2014 Game Developers Conference, the company is introducing development kit number two.

Starting today, Oculus is taking pre-orders for the Oculus Rift DK2, a refined version of the Crystal Cove prototype that blew us away at the Consumer Electronics Show in January, taking home our award for Best in Show. It also just so happens to be the last developer kit before the company announces the long-awaited consumer version of its headgear. Sony may just have announced its own virtual reality headset for PlayStation 4, but as far as headgear is concerned it seems like Oculus is already on the home stretch.

How far has Oculus come in a year? For months now, I've been playing with the original developer kit, without ever trying newer Oculus prototypes like Crystal Cove. Like tens of thousands of developers, I struggled with the painfully low 720p resolution and blurry motion of the original screen, sometimes feeling too nauseous to play more than a few minutes at a go. But when I put on the so-called Oculus Rift DK2 this week, I easily retained my composure.

The 1080p OLED panel still isn't high enough a resolution to avoid jagged edges — Oculus says the consumer version will have even higher resolution — but combined with special techniques to reduce blurring and motion sickness, the difference was already night and day. Looking around in virtual reality felt far more glassy, more like looking through a window than through a fine mesh visor. The DK2 has been combined with a peripheral: a new, custom camera which tracks the position of 40 infrared LEDs now mounted invisibly beneath the Rift's translucent shell. Thanks to that tracking, I could lean over a virtual table or look up a chimney flue, because the camera tracks in 3D space. Most of that's the same as Crystal Cove, mind you, but Oculus founder Palmer Luckey says the tech has improved even since then, with lenses made of a more advanced resin that ensures higher image quality across more of your field of view instead of just the centers of your vision. 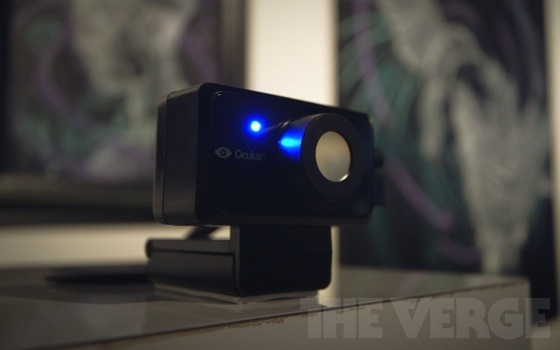 "We know what we need to ship."

I didn't find all of Oculus' choices completely welcome, though. Though the motion tracking camera makes games feel more fluid, it needs to be positioned in front of you, and the lack of LEDs on the rear of the new Rift developer kit means that you can't turn a full 180 degrees without breaking the line of sight from that camera and running into issues. Perhaps as a result, most of the demos on display were rather tame — if fun — diversions that presented you with a dollhouse-like 3D world to look into while seated, rather than an open 3D environment to explore. VR Knights by Epic Games is the new standout experience: two doll-like knights come to life and battle in a virtual living room, where you and another player actually appear in the virtual environment, while simultaneously controlling your interactive action figures by remote.

How far away is actual consumer virtual reality? Oculus still won't say, but Luckey says that it will be a complete redesign, without a single part — to his knowledge — carrying over from the development kits. "We're much closer," says Luckey. "The last year we've spent researching and developing what consumer VR needs to be... we didn't know before, and we do now."

The Oculus Rift Development Kit 2 will ship this July for $350. Later today, we'll see whether the company's new competition — Sony — has come far enough with its own virtual reality hardware to pose a serious challenge.