Microsoft is winning on Mac as Office for iPad looms

Microsoft is winning on Mac as Office for iPad looms

Nearly two years after the launch of Microsoft's Surface tablets, we're still waiting for a fully touch-optimized version of arguably the company's most important product: Office.

For iPad users, though, the wait is about to end.

While it might seem odd for Microsoft to launch an iPad version of Office before taking care of its own Windows tablets, the move is indicative of new areas of focus in the Satya Nadella era. Microsoft has been building iOS and Android apps for some time, and the company is increasingly pushing its software and services across multiple platforms.

Microsoft’s efforts on the Apple side appear to be reaping some early rewards. OneNote for Mac, a highly anticipated app that launched earlier this week, now sits at the top of Apple’s Mac App Store, joining two other free Microsoft-built Mac apps — OneDrive and Remote Desktop — in the Store's top 10. It’s not surprising for a new popular app to rise to the top of the App Store, but the more than 700 largely positive reviews, with an average four-star rating, suggest that demand remains high for Microsoft’s productivity apps on platforms outside of Windows. 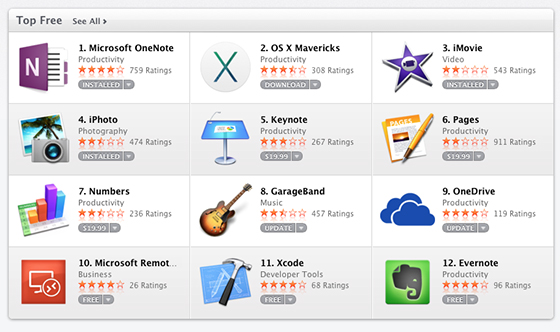 Meanwhile, KeyNote, Pages, and Numbers — Apple's equivalents of PowerPoint, Word, and Excel — are all in the top 10, but the reviews are overwhelmingly negative. With average ratings of two or three stars for all three apps, there’s a clear opportunity for Microsoft to own the Mac productivity space. It already offers Office for Mac, but Microsoft doesn’t list this particular version in the App Store, presumably to avoid sharing a cut of revenue with Apple. A new version of Office for Mac is planned for later this year, and OneNote for Mac provides the first look at the user interface changes Microsoft is planning. With 3.5 million Office 365 Home subscribers, the next version of Office for Mac will likely tap into that service fully, alongside OneDrive integration.

Indeed, the early victory for OneNote could help explain Microsoft’s decision to launch Office for iPad ahead of a Windows 8-style version of Office. Out of Microsoft’s three hot apps in the Mac App Store, OneDrive and OneNote are important pieces of Nadella's vision of a cloud- and mobile-focused future, regardless of the platform. To put it bluntly, Windows is slowly becoming little more than a delivery method for a suite of revenue-generating services. That can't be an easy pill to swallow for a company that is synonymous with its 30-year-old operating system — but as long as Microsoft trails Google's dominance in the cloud, it's something they'll have to get used to.