These are not your childhood glow in the dark posters — When The Lights Go Out 2 is the second annual exhibition at New York City’s Bottleneck Gallery featuring glow in the dark paintings of pop culture staples. All of the artwork is seemingly traditional, but the gallery regularly kills the lights and turns on blacklights to reveal the hidden images within the pieces. This year the show secured an exclusive, debut piece from artist Mark Englert called "New Eden," which is an homage to Bioshock in a six color screenprint. In normal light, it's the beautiful sea and horizon showing the city of Columbia, but when the lights go off, it turns into a neon city of Rapture. SlashFilm has a preview of some of the art, and the entire show will run at Bottleneck Gallery from March 22 to April 9. 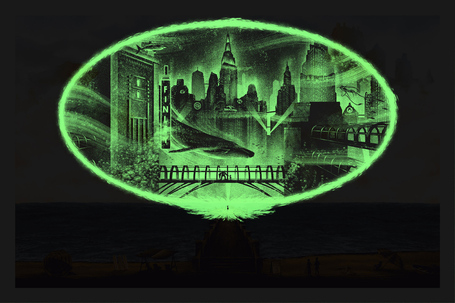