America must kill this fish

Fish poison, electric fences, and quarantined lakes might not be enough to eradicate Asian carp

Share All sharing options for: America must kill this fish

Ask any US wildlife official how the invasive Asian carp have managed to stick around US rivers for four decades, and they'll all say different versions of the same three things. First, the carp is a voracious eater that outcompetes other species for plankton, causing native US fish to die and allowing the carp to thrive. Second, the carp reproduces with incredible ease, so its populations have grown at tremendous speed. And third, the US doesn't possess any native species of fish large enough to prey on adult Asian carp, so they have very few predators. But a closer look at the four Asian carp species currently plaguing America's waters points to one glaring fact: we clearly don't know much about these fish.

Fortunately, researchers have finally started getting a handle on the animal best known for its ability to jump out of water when startled, says Duane Chapman, a biologist and leader of the Asian carp research team at the US Geological Survey (USGS). And thanks to that knowledge, scientists are now developing technologies — some of them deadly — that could soon make a dent in populations of this big, ravenous fish.

The Asian carp first infiltrated the US by way of fisheries. "Back in the 1970s, fish farmers were using them in aquaculture because they eat plankton and algae," says Kevin Irons, aquatic nuisance species program manager at the Illinois Department of Natural Resources. "We brought them over to the southern US and put them in with the catfish so they would clean the ponds, but they escaped almost immediately." The carp have been making their way up the Mississippi and Illinois River ever since.

Currently, the northernmost population is located in the Dresden Island Pool, about 50 miles south of Chicago. This is extremely worrisome for biologists, because just beyond Chicago lie the already fragile Great Lakes. If the Asian carp make it up there — researchers say this could happen within the next 20 years — they will devastate the entire ecosystem.

Poison particles so small that only Asian carp pick them out

The first and deadliest idea is to develop a poison that can kill the Asian carp — but leave other species unscathed. To come up with that poison, scientists first examined the carp's biology. They found that these fish eat about 10 percent of their body weight in plankton each day, which means they need to filter a lot of water through their gills to catch food. And the four Asian carp species in US waterways all have one thing in common: incredibly effective gills that can filter much smaller particles than the average native fish. So scientists at the USGS are trying to produce poison particles so small that only Asian carp pick them out of the water.

But small particles alone, which some other species can ingest, won't cut it for such a large and dispersed population of fish, so researchers are going one step further by putting the carp's unique digestive system to good use. "The particles are designed to be broken down, but only by the enzymes in the carp's gut," Chapman says. Other fish that might ingest the particles, such as largemouth bass or catfish, don't produce this enzyme, so they won't be affected. "And when carp break it down," he says, "they release the toxin and it causes them to die."

"If the eggs settle to the bottom, it can have a lethal effect on the fish."

Unfortunately, these particles — called matrices — won't be ready for some time, so researchers are also looking into another way of disrupting carp populations by going after their eggs. "Carp eggs require a certain amount of drift in the water to survive," Chapman explains. "If the eggs settle to the bottom, it can have a lethal effect on the fish."

If researchers can build dams that only come up halfway to the water's surface, they might be able to interrupt the drift in the carp's favorite spawning locations. "We are still at that point where we are just beginning to understand how these fish spawn," Chapman says. "But down the line, we may work with management agencies and state officials to build these sorts of barriers." 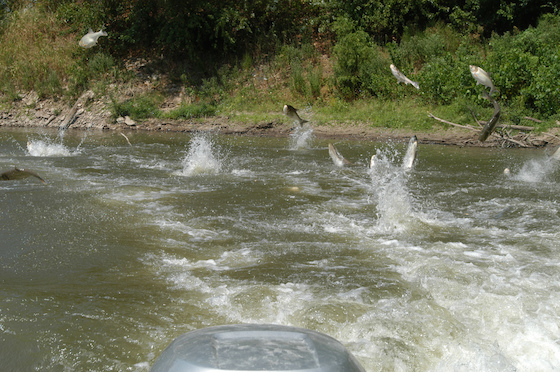 But the most drastic measure floating around is one that could completely change the city of Chicago, because officials are thinking about blocking off the Chicago Sanitary and Ship Canal completely. "The US Army engineers conducted a major study, and they found that the only end solution is the full separation of the waterways," says Marc Gaden, communications director at the Great Lakes Fishery Commission. The canal system links directly into the Great Lakes, he says, so "it's the most likely pathway for the carp to take."

The project would take 25 years to complete and could cost up to $18 billion. It would also completely disrupt Chicago's shipping economy and sewage system, Gaden says. "The barrier itself is the cheap part, it's the tunnel and water storage systems that need to be built that will cost the most money."

Yet the Great Lakes aren't defenseless. Already, an electrical barrier located about halfway between Chicago and the northernmost carp population is in place, and its purpose is to keep the fish at bay. "When fish are near it, they get increasingly uncomfortable and unable to swim," Gaden says. Unfortunately, the electrical barrier would have little effect on juvenile carp and larvae, so it's not a permanent solution.

"They aren't a favored food for Americans"

For now, the only measure that seems to be putting a dent in the fish population is commercial fishing. "The USGS and the state of Illinois contracted with commercial fishermen, so they could fish the Asian carp out of the Illinois waterway system," says Jesse Trushenski, a nutritionist specializing in aquaculture at Southern Illinois University. "But given that they aren't a favored food for Americans, human food use is a very small market."

Trushenski thinks that one way to encourage commercial fishing is to find alternative uses for the fish meat. So she's come up with various forms of fish meal made out of Asian carp, which can then be fed to fish in aquacultures. "Our industry is always looking for new protein sources," she says, "so you can take Asian carp, grind them up into fish meal or turn them into oil." According to her, the Asian carp protein holds up well to current alternatives, and the fish she has fed it to seem to appreciate its taste.

Yet none of the current solutions are perfect, Irons says. And even if the methods in development turn out to be effective, "blocking the Chicago canal might still be necessary," he says. The Asian carp certainly aren't the first invasive species to spread their fins in North America, and they won't be the last, he explains. And depending on how long it takes to get a handle on the biology of future aquatic invaders, we might not be able to stop them. So blocking off whole areas of freshwater from each other once and for all, Irons says, might actually be our best — and only — defense.