Oculus has been trying to put virtual reality into the hands of consumers since 2012, and apparently Sony has also been experimenting with it behind closed doors. Sony revealed its Project Morpheus VR prototype at GDC 2014, saying it was the culmination of over three years of work (the headset will double as an upcoming developer kit). Oculus also released what it claims is its final development kit, the Rift DK2, and while it's too soon to tell how Morpheus will compete with Rift on store shelves, we can take a look at the preliminary nuts and bolts and see how the two stack up.

The main component of both Oculus' and Sony’s machines is a head-mounted display, but their designs differ greatly and evoke distinct styles. Oculus’ newest headset is slightly more svelte than the two previous models, trading in the original pointed edges for curved ones. While it’s still a pair of large, black goggles with an embedded screen sitting on your face, this one looks slightly less intimidating. Sony has tried its hand at VR in the past, but Project Morpheus is the first with a polished look and a build that’s similar to the Rift. The headset looks like a pair of cyborg-esque ski goggles that wrap around the face, the edges rimmed with silver and emitting the recognizable PlayStation blue light. 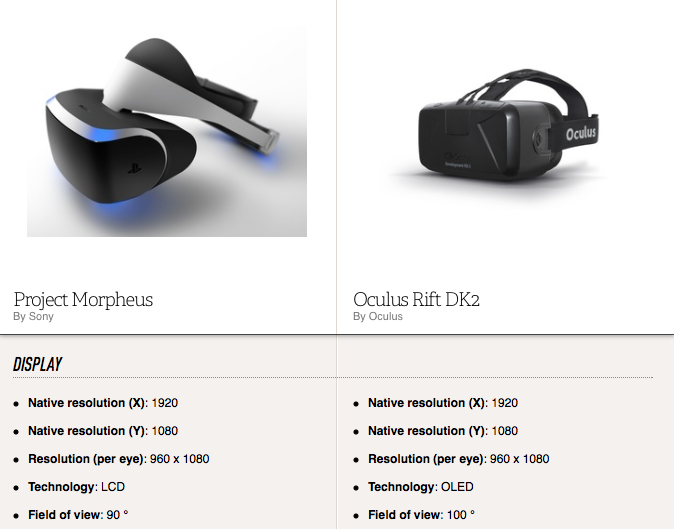 But inside the headsets is where all the heavy lifting happens. The Oculus Rift DK2 is a refined version of the Crystal Cover prototype we saw at CES 2014, which upgraded to a 1080p OLED display with a 100-degree field of view. The display has been one of Oculus’ biggest focal points: using a low persistence technique, it receives information slowly so the player’s brain can smooth out the images the eyes take in, making it feel like you’re looking through a window and not at a screen. Oculus also made the new lenses from a type of resin that they claim will deliver a higher quality image across the entire field of view.

The new developer kit also includes an external camera that tracks 40 infrared LEDs embedded beneath the headset’s shell, allowing for better positional tracking. Verge reporter Sean Hollister found that the camera provided a more fluid gaming experience because it tracks more 3D space, however it cannot track your head accurately if you turn completely around since the LED lights are only embedded on certain parts of the headset.

Sony's first entry into the VR world matches the Oculus Rift on many fronts: Project Morpheus also has a 1080p display, although it’s LCD and not OLED, and has a slightly smaller field of view of 90 degrees. Verge reporter Adi Robertson noted that Morpheus’ screen is slightly blurrier than the Rift's, and it’s unclear whether Sony could achieve the same low persistence technique Oculus can using its current LCD screen.

The company also claims Morpheus will provide a more immersive experience. Unlike the Rift that only has LEDs for tracking on the front and sides of the headset, Morpheus has tracking technology all around it, allowing the camera to track the movement of the entire device. The company is also working on 3D binaural technology that could recreate stereoscopic sounds in real time, and the headset is supposed to be comfortable enough that it won’t put excess weight on your nose or cheeks. When we demoed Project Morpheus, it was comfortable to wear; while it did fog up after some time, it did a decent job blocking out light. 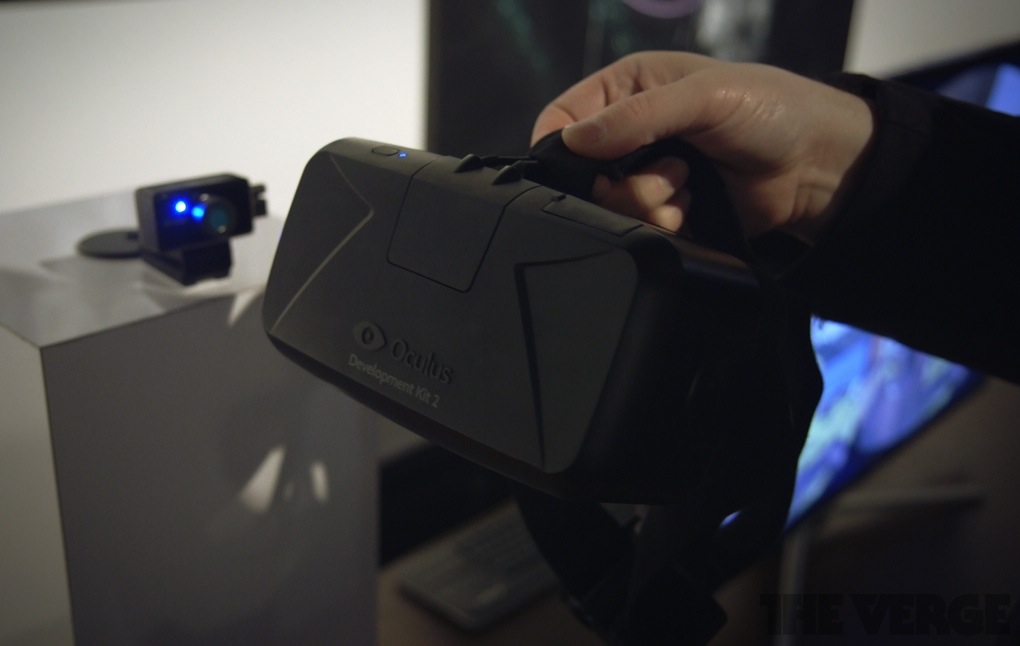 The headset is currently connected to a PS4 by a 5-meter-long cable, but Sony eventually wants it to be wireless. The same camera that tracks the PS4 Move controllers tracks the headset and how you move in space, and we found in our demo that the position tracking was good, although not totally precise — you could feel like you’re drifting away as the pictures in front of you move out of view.

These prototypes show that Oculus and Sony are getting close to making VR a thing average consumers have in their living rooms, but it’s still fairly early in the game. These devices probably won’t look anything like the final products the two companies release down the line. Oculus told The Verge that the Rift will undergo a complete redesign before the final version reaches consumers, and Sony said it won’t release a consumer product this year. But currently, Project Morpheus is a worthy competitor for the Oculus Rift, and that’s a good thing. Sony’s name recognition could get more people interested in VR, and that could also mean more developers, designers, and engineers get seriously involved in shaping the sphere. We’ll see more healthy competition between Oculus, Sony, and other VR companies, which eventually means more choices for consumers — but the biggest impact could be making VR more accessible, affordable, and enjoyable for everyone.

If you want to learn more about any of the products mentioned above, all of our information on them can be found through the database box located beneath the article. For more on displays and just about every product around, you can check out the full Verge Database right here.