The words "combinatorial explosion" have probably never come up in a video game storytelling talk as many times as they did with BioShock creator Ken Levine's "Narrative Legos." At the 2014 Game Developers Conference in San Francisco, Levine outlined an ambitious — if vague — idea for endlessly replayable, systems-based stories that he compares to a player-driven episode of Game of Thrones. When a slide deck offhandedly lists "build a web of nearly infinite relationship states" as a prerequisite, you're in for something that's at least compelling listening.

The hallmark of Levine's BioShock series is carefully paced, twist-driven story lines, but that's something he seems finished with for now. That's partly because those plots require keeping secrets from the audience, a practice Levine sees as outdated in an age where games like Minecraft and DayZ make a name by selling alpha and beta access. Things like the climactic reveal of a character aren't endlessly repeatable. "Once those key story bits are revealed, that's kind of your special sauce," said Levine. "I think right now audiences want to be part of [development]. They want to play alphas. They want to be giving their feedback along the way."

"Once those key story bits are revealed, that's kind of your special sauce."

The thing he hopes to replace it with is significantly less clear. In the absolute simplest terms, it's about creating non-player characters who will react according to designated needs and desires, and whose responses will give rise to friendships, betrayals, and other interesting stories. Careful to avoid any hints that he's actually working on a new game, he spun out a high fantasy tale with characters with names like "Romeo," "Juliet," and "CliffyB." Each character is governed by a a handful of motivations that can be represented on a set of sliders: Juliet the Orc might hate elves, love the old gods, or want to marry you. If you build a shrine to the old gods, she'll like you a little more. If you help an elf, she'll like you a little less. Reaching a certain level of friendship or hatred could unlock some kind of reward or punishment from her, or it could trigger an event in the plot.

The goal is to generate zero-sum games that will create conflict. Some character desires might only be revealed over time, and they might contradict each other. Maybe Juliet the Orc hates elves but will make an exception for Romeo the Elf, and she'll only tell you this if you go on enough quests with her. Maybe someone else's motivation is to kill Romeo and woo Juliet instead. Whatever the system is, it's the kind of thing that can only be represented with a lot of arrows and bar graphs... and that results in explanations like "Frank cares about hating elves, but this is really how he feels about you in relation to hating elves." 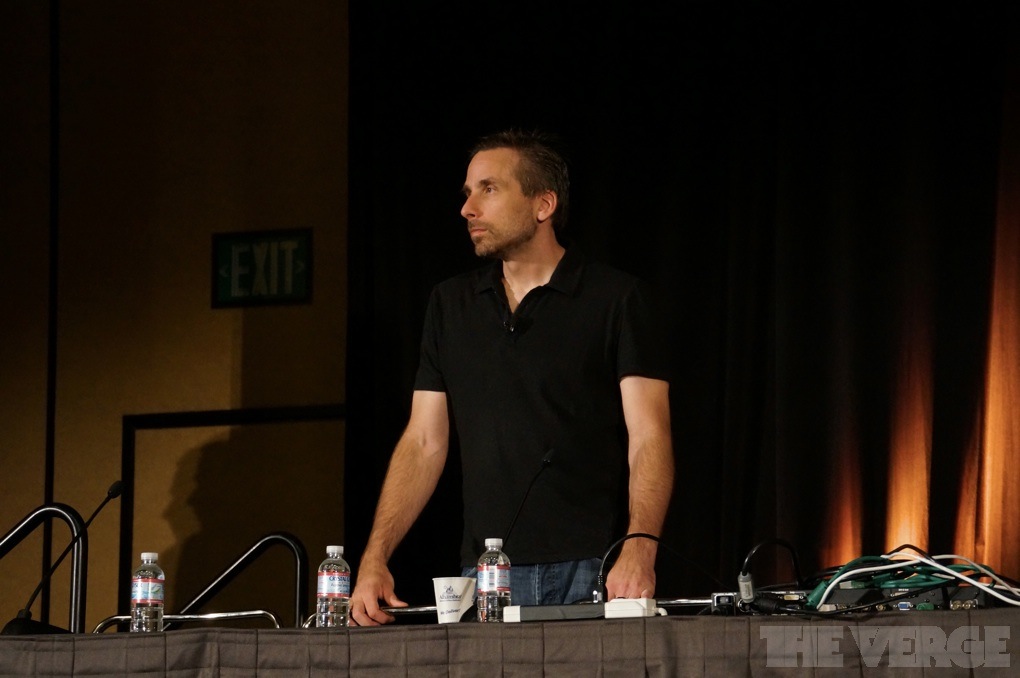 It's also, however, the kind of thing that's hard to distinguish from existing interactive fiction and role-playing game systems. A game like Fallout will have multiple factions that offer different gameplay rewards, and helping one group will often alienate another. Levine's system seems theoretically more complicated under the hood, but it wouldn't be procedurally generated: Levine called it a way to organize individual scenes that could be written and acted. Discrete, variable character motivations and personality traits were a part of game designer Chris Crawford's (currently defunct) Storytron engine, and a similar idea is found in interactive fiction author Emily Short's (also currently defunct) Versu creation tool. If anything, Levine's idea is a successor to these efforts.

For now, narrative Legos are a back of the napkin thought experiment

Perhaps his most interesting contribution is a proposal that characters could have a randomizable list of traits to make them different on each playthrough. Oddly, this idea was hinted at in the unrealized plans for a Timothy Leary Neuromancer adaptation. But it's a bit early to be talking about what we'd see in a "narrative Lego" video game. For now, it's largely a back of the napkin idea put forward to spur conversation at GDC. Levine is open about the fact that he hasn't prototyped any of his ideas, though he says it could be easily done in a pen-and-paper role-playing game format, using a computer only to keep track of characters' reactions and interactions.

Levine's name made the news last month when his studio Irrational abruptly shut down, and all but about 15 members of its staff were laid off as Levine condensed the studio to work on a new project. He mentioned the change in passing, saying that he'd wanted "time to fail" at a new venture, and "time to fail for a long period when you don't have 150 people who are looking at you and saying 'Dude, what am I supposed to be doing today?'" According to reports of BioShock Infinite's tortured development process, the game went badly off track precisely because that time wasn't there: Levine and others iterated on chunks of design for years on end.

His "narrative Lego" technique doesn't seem like it will actually make less work for writers, since they'll still be creating huge numbers of scenes between characters who literally have multiple personalities. Audience members raised the question of a combinatorial explosion as situations and variables stacked up, and since it's a mostly theoretical idea, they could well be right. After seeing Levine work on one narrative thread for some time now, though, it's interesting to see the possibility of something new on the horizon — not just a new plot or a return to more complicated systems after the extremely straightforward shooter BioShock Infinite, but a switch to an entirely different school of storytelling.