Google has launched a playful new app for Chromecast that lets a group of people create and draw on a collage of photos displayed on a TV. The app is called Photowall, and though it requires an iOS device to get started right now, anyone with a smartphone or a tablet can join in once it's going. Once an iOS user launches Photowall, others will be able to visit a specific URL in Chrome to start adding their own photos to the collage and doodling on them. That app will record everything that happens too, and once everyone's done, it'll turn the entire stream into a YouTube video.

Update: It seems that Photowall will only be iOS-only for a matter of hours. Google says that an Android version of the app will be arriving later today, though it's yet to appear in the Play Store as of shortly after 1PM ET. You'll also be able to start a collage through a Chrome extension.

Google also published a video demonstrating the new app, and it explains that Photowall is meant more as a demonstration of what Chrome and a Chromecast can do when paired together than anything else. Google's interest seems to be in showing developers the type of experience that can be created now that Chromecast is an open platform, with hopes of seeing more like it down the road. 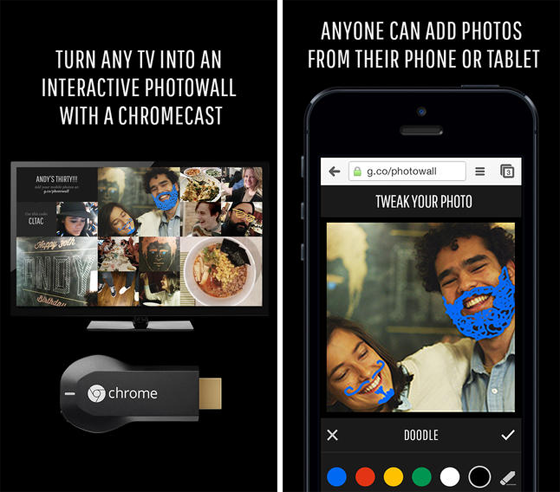