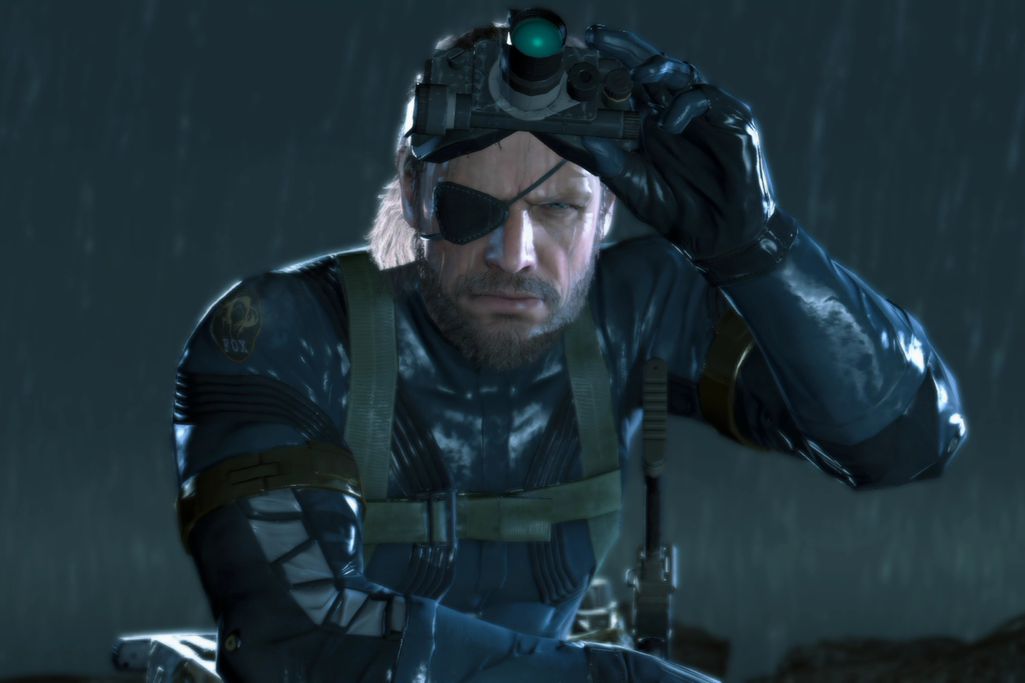 Metal Gear Solid V: Ground Zeroes isn’t the protracted epic you might expect from Hideo Kojima’s philosophical, unhinged spy saga, which has been one of the most original and unpredictable fixtures in video games for decades. Instead, it serves not only as a first next-generation outing for the series, but also as a bite-sized prologue to the fifth entry proper, Metal Gear Solid V: The Phantom Pain. That game, which has no release date as of yet, is billed as a revolution for Metal Gear Solid; for the first time, the stealth action game will go open world.

But there’s little of that to be found in Ground Zeroes — it’s not a full game, but a single sneaking mission set on a sprawling Cuban black site. 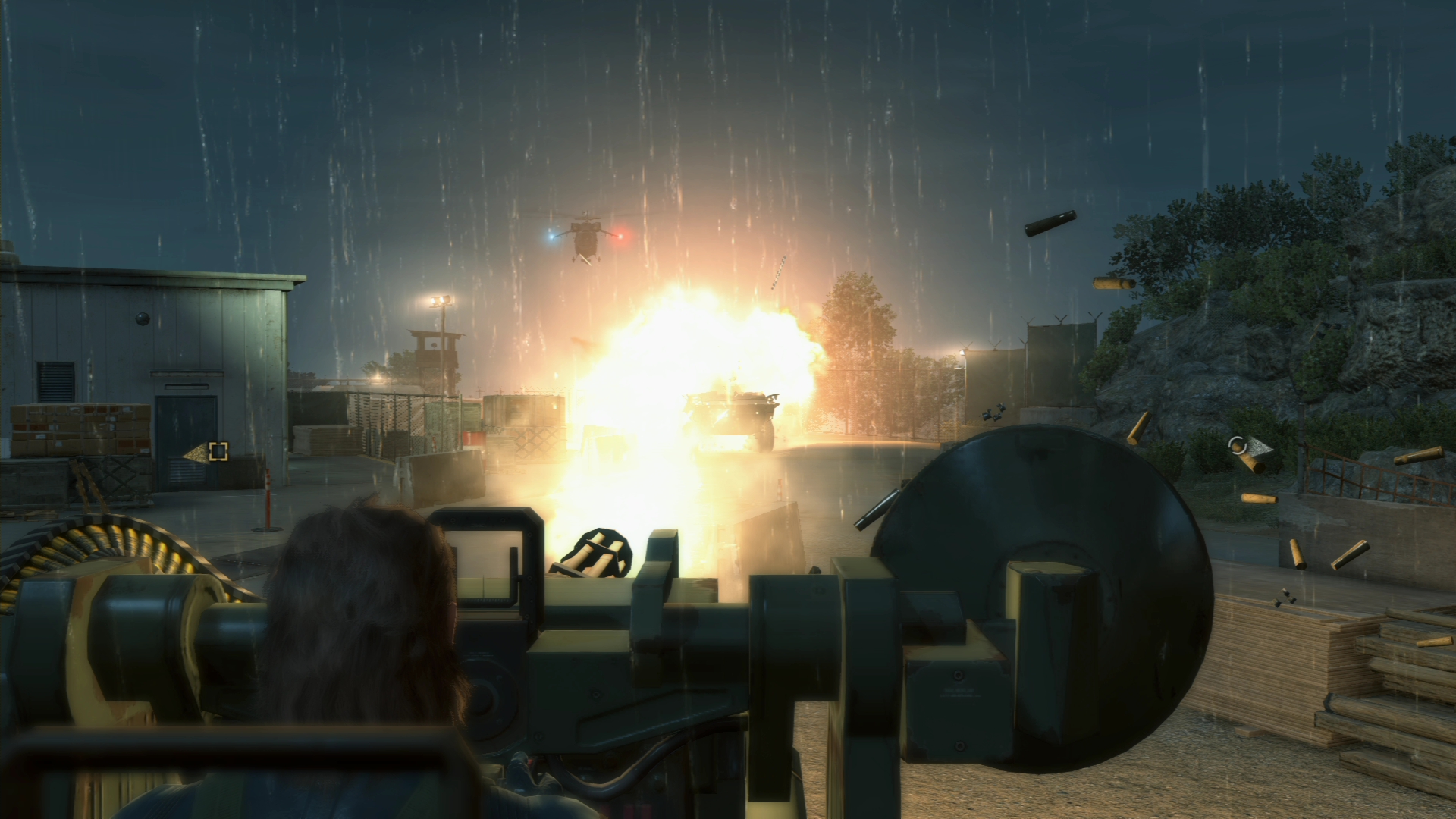 The Metal Gear Solid games aren’t just about terrorists, nuclear warheads, and new-world-order conspiracy theories. They are about all that, of course, but they’ve also gone to much weirder places: telepathic bosses called things like Psycho Mantis, hiding in a vast assortment of cardboard boxes, and the eternal question of whether love can bloom on a battlefield. But there’s little of that offbeat past to be found in Ground Zeroes: it ditches the cardboard boxes, Codec communication system, and general fourth-wall-breaking sense of whimsy. There are lockers and dumpsters, but you can’t hide incapacitated enemies or yourself in them. You can press yourself against a wall for cover, but you can’t rap that wall with your fist to attract a guard’s attention — a feature so fundamental to the series’ mechanics that it even made it into the excellent Game Boy Color version. And, over a decade after Halo drew the blueprint for countless other action games, Metal Gear Solid now features regenerating health and limits on the number of weapons you can carry. 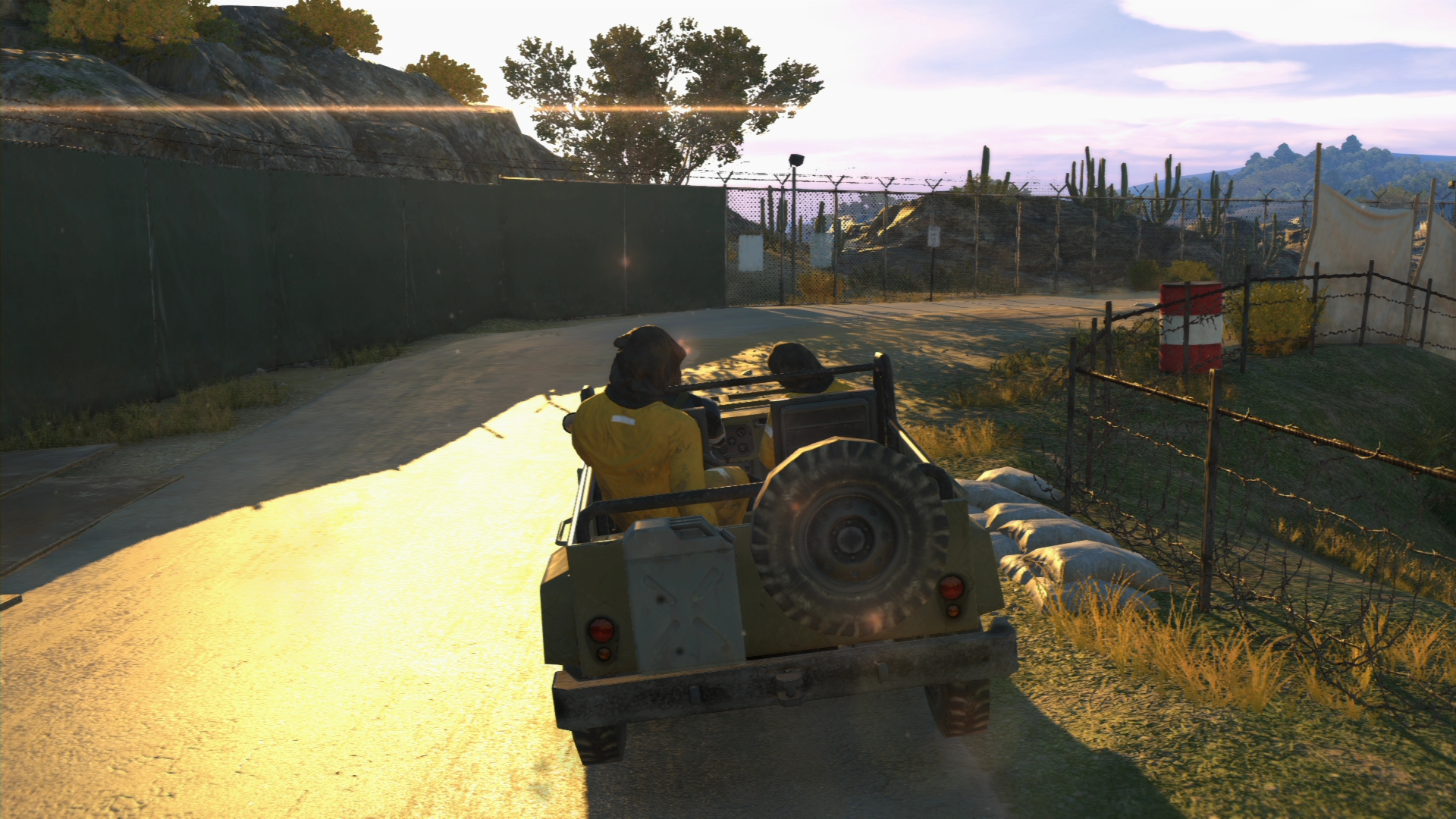 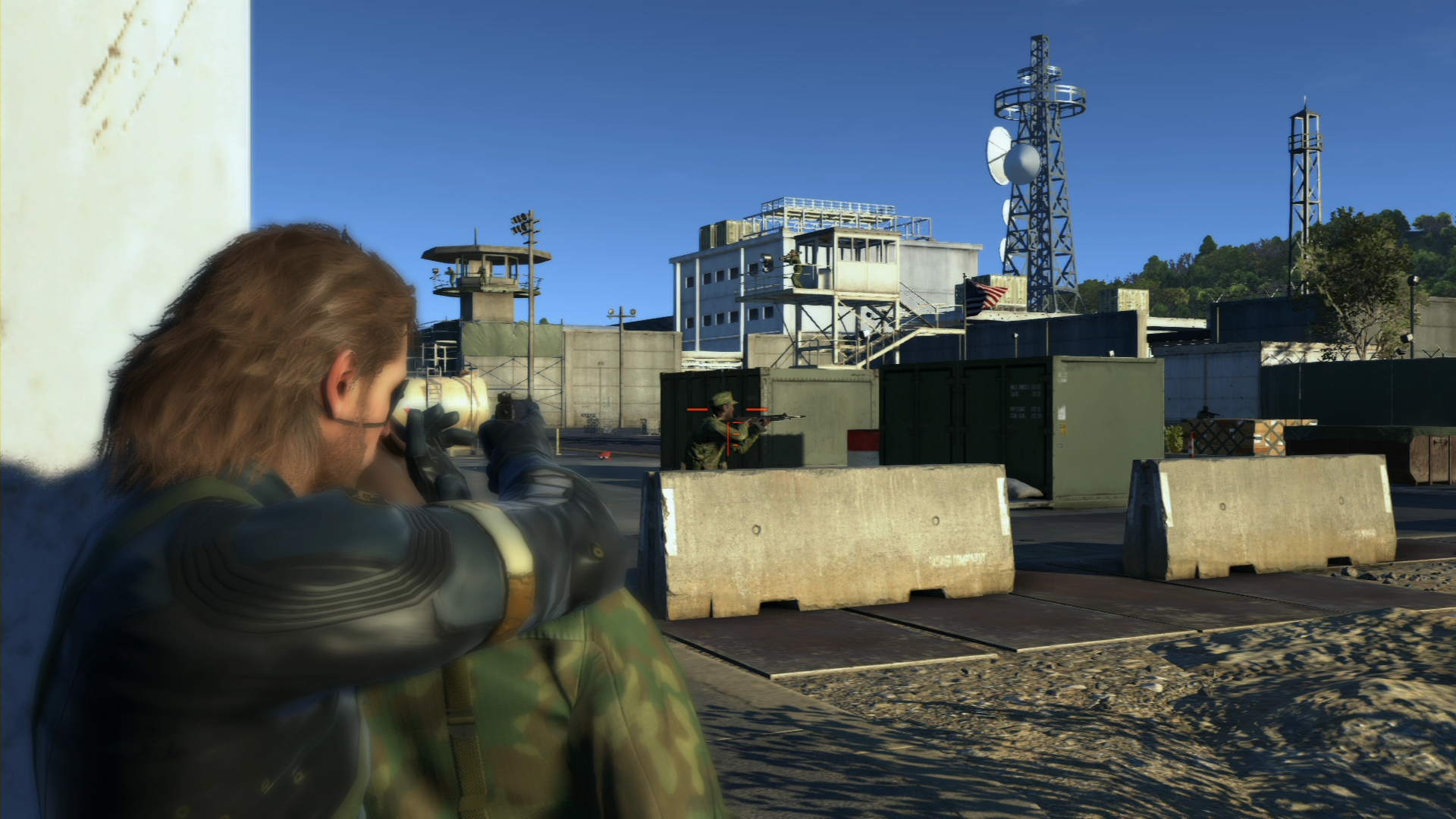 Ground Zeroes plays much the same as Metal Gear Solid 4

But beside these jarring alterations, Ground Zeroes plays much the same as the series’ last major outing, Metal Gear Solid 4: Guns of the Patriots. It’s the same unique mix of stealth and shooting, where the guards are smart enough to keep you on your toes but dumb enough to let you have a little fun. You can now drive vehicles for the first time — though many will piece their way through the camp without ever needing to take the wheel — and Snake has gained some extra abilities. The way you can tag enemies with your binoculars is straight out of Assassin’s Creed, and an optional automatic bullet-time mode gives you a few precious seconds to take out alerted enemies before they sound the alarm. Ground Zeroes’ evolutions show the series taking inspiration from the wider world of gaming, after several entries that saw Kojima Productions blaze its own trail. It’s not a complaint, but if The Phantom Pain is to prove as equally innovative as prior games in the series, there’s little evidence on show in Ground Zeroes.

Ground Zeroes is a short game by any metric; I finished the main mission in just 96 minutes. It’s a straight search-and-rescue operation bookended by two typical Metal Gear Solid cutscenes — verbose, cinematic, and entertaining — but those looking for major story revelations may be disappointed. Ground Zeroes continues Naked Snake’s story after the events of PSP game Peace Walker — in the likely event that you didn’t play this, an 11-page catch-up is available from the main menu — and features the return of some of that game’s characters as well as introducing new ones.

Chief of these is Skull Face, a disfigured villain holding Snake’s comrades hostage. The character is intriguing, but you don’t hear much from him beyond Ground Zeroes’ atmospheric opening. The rest of the plot is gleaned from cassette tapes scattered around the site, and Ground Zeroes spins a far darker tale through these than previous entries in the series, pushing the boundaries of taste with none of Kojima’s trademark comic relief. The handling of one character in particular is less than congruous with her portrayal in Peace Walker, and comes off as shocking for the sake of it rather than clever or subversive. 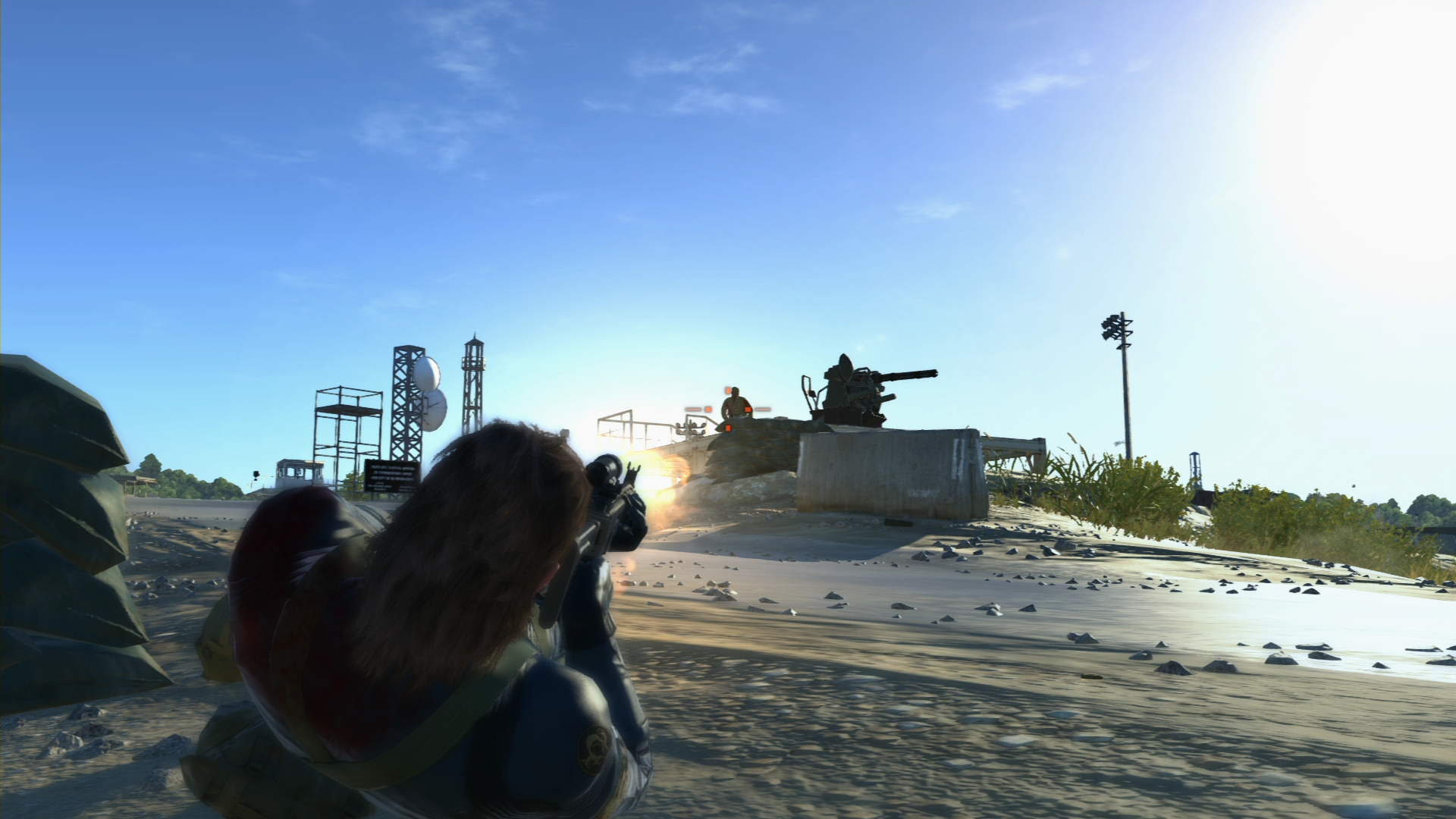 But Metal Gear Solid’s story lines have always been divisive. Ground Zeroes’ biggest problem is that it costs $29.99 on new-generation consoles — half the price of a regular game, despite its main mode lasting less than a quarter as long as most. This is mitigated by five additional missions set in the same locale; these are challenging, varied, and do add value, but only those already in love with the Metal Gear Solid formula will want to spend such a long time in one place. Ground Zeroes’ ridiculous final cutscene, about half of which should be playable, makes the stingy content offering all the more apparent: the game is little more than a teaser for The Phantom Pain.

Perhaps the most controversial absence will be the vocal talents of David Hayter, who’s portrayed protagonist Snake in each mainline Metal Gear Solid game with one of the most iconic voices in gaming — think Clint Eastwood after downing a few mugs of unground coffee beans. He’s been replaced by 24 star Kiefer Sutherland, who turns in a mixed performance. Jack Bauer and Snake aren’t the most different characters in the world, and Sutherland’s grounded reading lends weight to Ground Zeroes’ more muted tone. But he often seems to be aping Hayter’s intonation, and his bored delivery of Snake’s "Kept you waiting, huh?" catchphrase falls flat. Another line is ripped straight from 24.

The end comes all too soon

Although Ground Zeroes is also appearing on the PS3 and Xbox 360, Metal Gear Solid has made a smooth jump to next-gen. The game runs at a crisp 1080p and 60fps on the PlayStation 4 (720p / 60fps on Xbox One) with some stunning lighting and character art, though the main mission’s nighttime setting flatters — like Jurassic Park, Ground Zeroes looks a lot better in the dark. There’s also a slick new companion app that lets you use a phone or tablet as a real-world substitute for Snake’s in-game gadget, the iDroid; I played much of Ground Zeroes with an iPad in my lap to check enemy locations, listen to a virtual cassette Walkman, or call in helicopter evacuations for rescued characters. But overall, the basic loop of playing Metal Gear Solid hasn’t evolved too much, despite the several superficial changes — like many individual stages in the series, Ground Zeroes’ single level acts as an entertaining sandbox with countless possible routes to the end. The problem is that the end comes all too soon.

Two groups of people should consider buying Ground Zeroes: those who are addicted to Metal Gear Solid’s shadowy intrigue and can’t wait to see where it goes next, and those who’ve just bought a new-generation console and want to give it a workout. I fall into both categories and, though I had fun with Ground Zeroes, would advise consumer caution; if Kojima really wanted to split Metal Gear Solid V into two parts, this one shouldn’t have been so slight or expensive. There’s still nothing quite like Metal Gear Solid, and Ground Zeroes is a dazzling amuse-bouche — just don’t expect anything close to a main course.