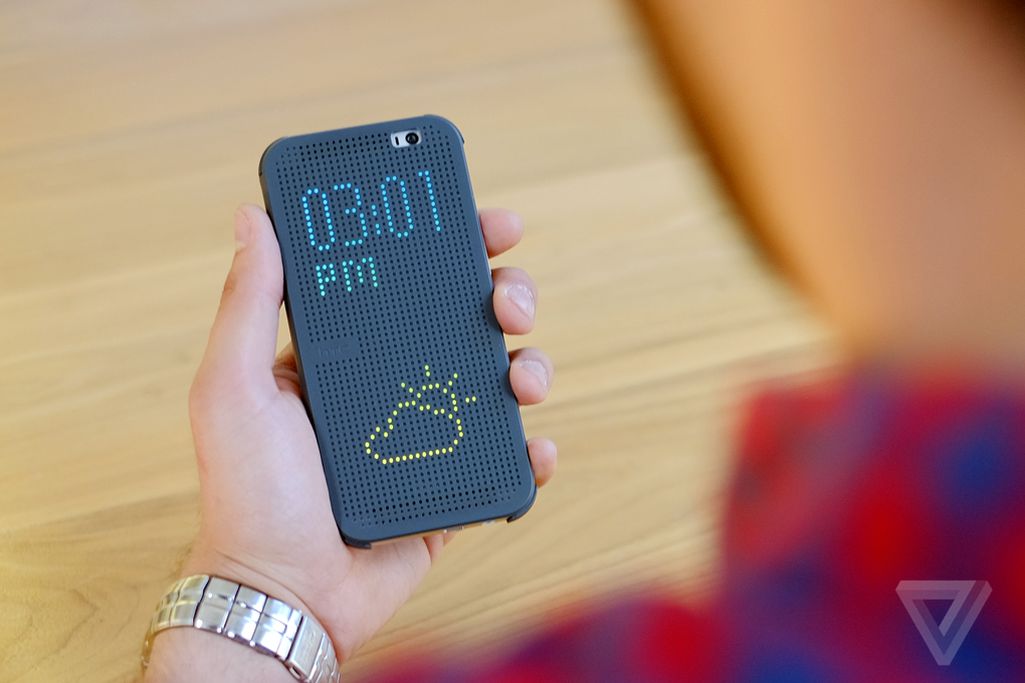 “If it wasn’t for the One, HTC probably wouldn’t be here today,” says Scott Croyle, vice president of design at HTC. Croyle is giving me a tour of the company’s San Francisco studio, which was acquired when HTC bought the One & Co. design firm in 2008. “It’s the reason we’re still in the conversation.”

Four years ago, HTC was at the top of its game. It had successfully transitioned from a white label smartphone pioneer to a well-known brand. The EVO 4G was making waves on the market, ushering in the era of broadband data and big screens. It had strong relationships with every major carrier, and was the premier Android smartphone manufacturer taking on Apple. By the end of 2010, it had ridden its wave of success to take 20 percent of the US smartphone market, beating out even RIM (which was still a major industry force at the time) and claiming the top spot in America.

But then Samsung happened. Beginning in 2011 with the Galaxy S II, and continuing through 2012 and 2013, Samsung flooded the smartphone market with devices and brand recognition at every price point. It especially hammered the premium market where HTC’s smartphones were riding high. Samsung accompanied the product blitz with massive marketing campaigns that continue to this day — from the Oscars to the Super Bowl, there really isn’t far you can go without having a Samsung ad thrown in your face.

By the end of 2013, HTC’s market share had tumbled down well below 10 percent, and the company had posted its first ever quarterly loss.

Last year, HTC tried to right its sinking ship by narrowing its product line to just a handful of devices (down from dozens in years past) and putting much of its focus on the One, the new flagship. It was a major statement by HTC, representing a departure in design language, new ways of dealing with US carriers, and a complete revamp of the company’s smartphone portfolio. By all accounts, the One was a great device — it was universally praised for its beautiful design and fast performance and won numerous design awards and accolades. It was also available on every major carrier in major markets, something that LG and Sony still struggle to achieve.

But it wasn’t the blockbuster profit machine the company so desperately needed. It turned out to be the best selling phone ever for the company, but it didn’t stop HTC’s overall marketshare from rapidly declining and its profits from dwindling down to almost nothing. Officially, the company blamed its problems on supply-chain issues and marketing struggles, noting that marketing was its biggest challenge going forward. 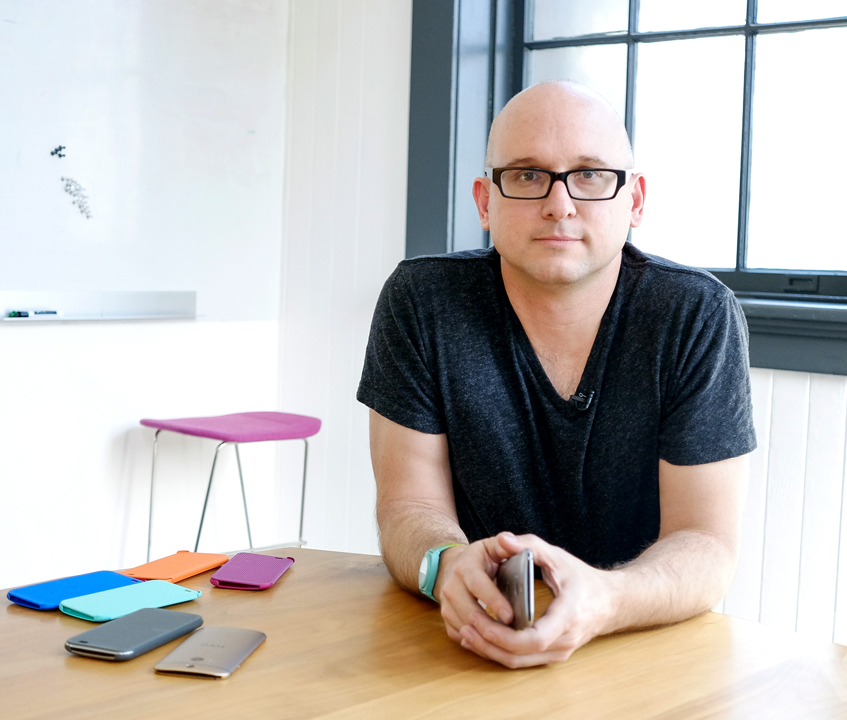 "If it wasn't for the One, HTC probably wouldn't be here today."

HTC’s big statement was a failure. Not only did it fail to reverse the company’s course, it spurred on a raft of executive departures and internal turmoil throughout the year.

Now the company is launching its next big effort at a comeback. The new One, also known as the M8, is better than last year’s already impressive model in almost every respect: the design has been refined, it has a bigger battery, the processor is faster, the camera has new tricks, and the software has been made friendlier. It is without a doubt a stunning device and it demonstrates that HTC put a lot of effort into making the best smartphone it could. "When you see the new phone and hold [it], it feels significantly different and better," says Drew Bamford, head of user experience at HTC. "We looked really hard at the previous design and thought, where are those opportunities for improvement? Some of those were around how the product feels in your hand and the surface [of it], the colors of the materials and finishes. Those are two areas we’ve done quite a bit of work on."

Croyle says the key to the company’s success this year is building upon the momentum it started with last year’s phone. "The HTC One and the One family of smartphones were our best selling phones ever," he says. "We’ve gotta leverage that momentum that we had with the One now with the One M8."

To do that, HTC is getting out ahead of its big competitor and putting the One on the market before Samsung is able to get the Galaxy S5 out the door. The new One will be available worldwide on March 25th, the same day it’s being publicly announced and a full 17 days before the S5 is expected to be in stores — an eternity for two devices that will go head-to-head for Android supremacy. Same-day availability is no small feat — even Apple, which is lauded for quickly getting products to market, has not done that for its major smartphones or tablets. 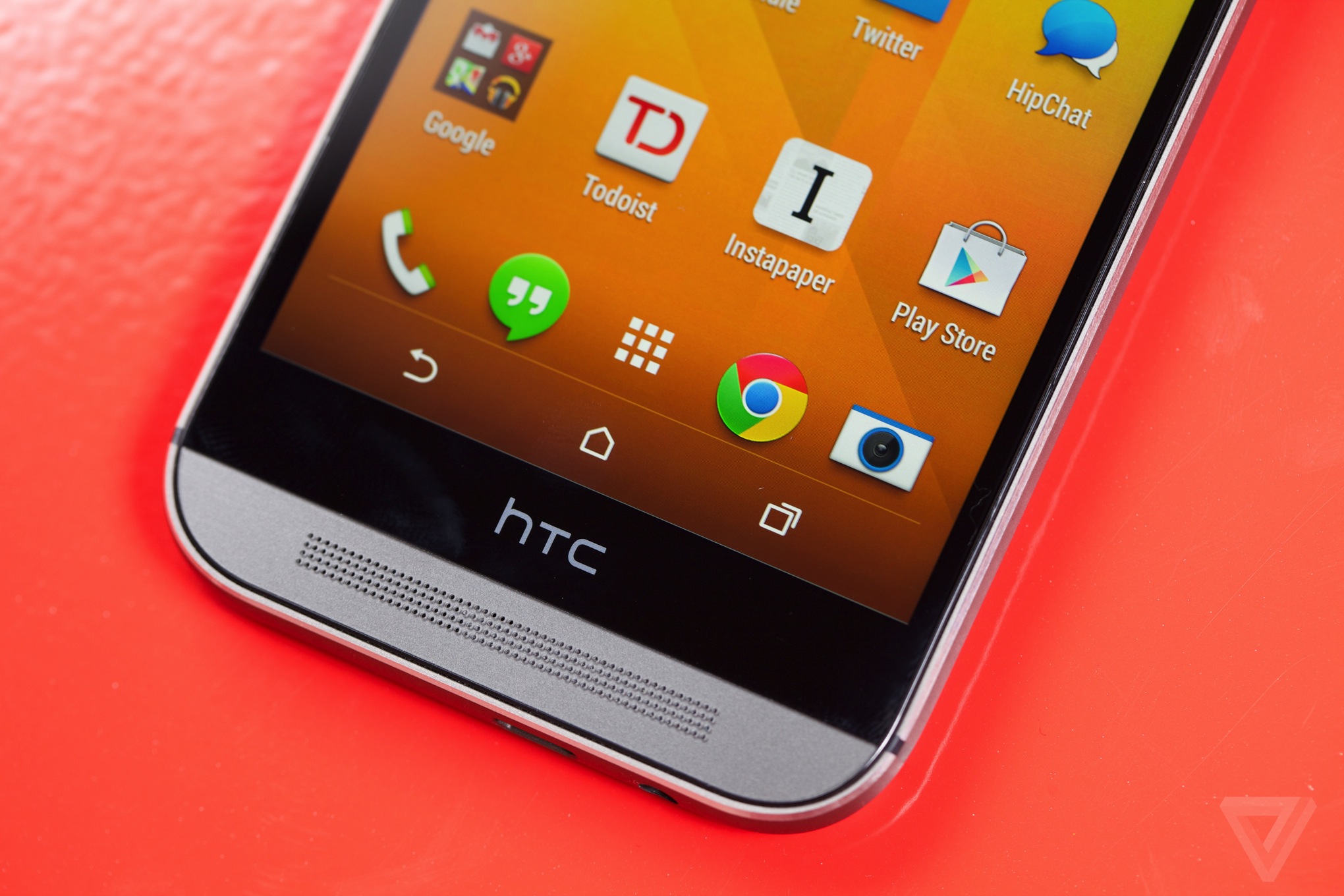 But aside from addressing its supply-chain issues and getting the new smartphone out the door and on shelves quickly, HTC’s approach with this year’s One doesn’t seem terribly different than before. There are marketable features everywhere — BoomSound, BlinkFeed, UltraPixel, Duo Camera, the new Dot View case. As tiresome as they may be at times, marketing names for features are a way to get people thinking about a product before they go into a store, and that’s what HTC so desperately needs. It can’t wait for someone to walk in to a store and be impressed with the One when they see it for the first time — that didn’t work last year and it likely won’t work this year. It also didn’t work for Motorola, which had a critically praised phone in the Moto X that didn’t turn into a commercial success. HTC’s big challenge this year will be getting people to see what’s different and what’s better with the new One before they get to the store.

According to Bamford, HTC’s new marketing approach will be focused on just that: educating customers on what’s different between this year’s model and last year’s One. "It’s a lot more about the product and less about quirky brand-related stuff," he notes. "We’re trying to provide evidence around what these improvements are, and we’re trying to leverage what people will find out in the world. If you ask somebody who’s an expert about the HTC One, what will they tell you?" 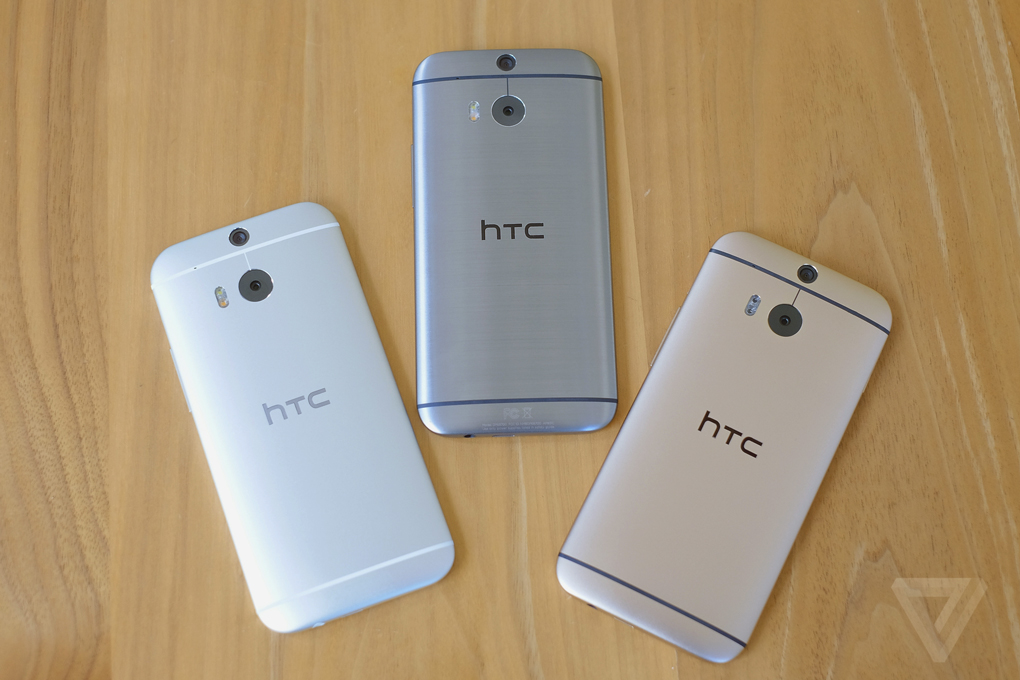 "If someone walks into a store and can’t afford [the One], we’ve gotta give them something that they can afford."

The company is also taking a slightly different approach with the rest of its lineup. Where last year’s focus was entirely on the One and its derivatives, this year HTC is committed to offering more options at more price points. That includes the crucial midrange market, which is highly profitable and fast-growing, but was largely ignored by HTC last year. It has already announced the Desire 816, a plastic smartphone that offers many of the flagship features of the One at a lower price. It’s available for preorder in China now, where about 35 percent of HTC’s sales are happening, but HTC says it is coming to the US and Europe later this year. "You’ll see us pay more attention to that product range, making it really the best product in that price range rather than just trying to be a cost-reduced version of our hero product," confirms Bamford.

"If someone walks into a store and can’t afford [the One], we’ve gotta give them something that they can afford," notes Croyle. "We’re going to hit a much broader spectrum of products so that wherever they are, they can walk away with an HTC product. We can deliver that great experience and great design, regardless of the price point."

That almost feels like a return to the HTC that was successful years ago, the one that had a myriad of products on the market at the same time. But back then, carriers were much more powerful than they are now, and each one demanded custom products to differentiate their lineups. Three years ago, a phone like the HTC One couldn’t exist in the United States. AT&T, Verizon, Sprint, and T-Mobile would have all demanded unique variants, each with a different name and hardware features. Apple broke down that barrier with the iPhone, which is the same device across every carrier, and both Samsung and HTC followed suit in recent years with their flagship smartphones. 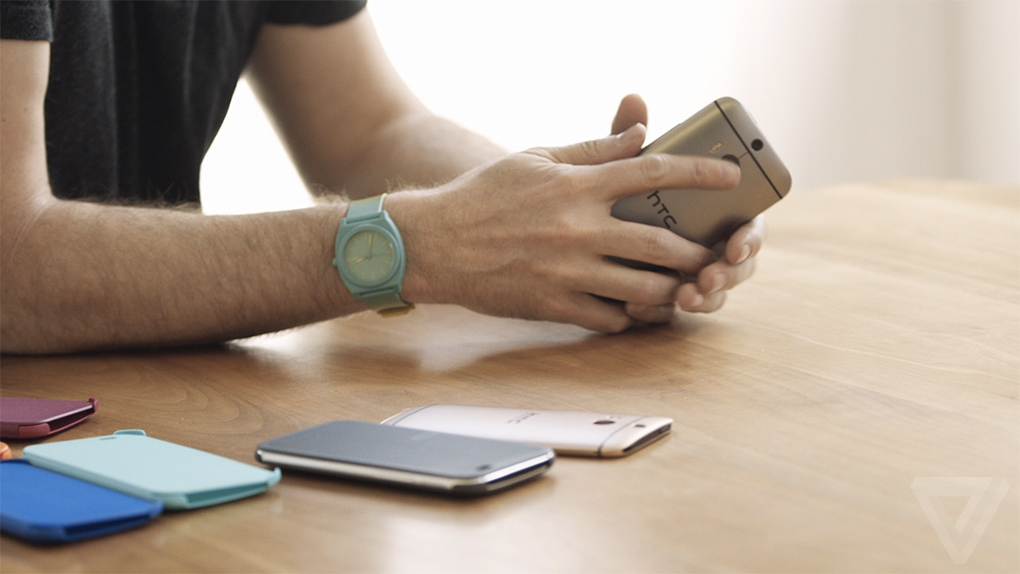 One product across many carriers is generally considered a good thing — it lessens customer confusion and lets companies build a stronger brand. But the downside is that carriers are far less involved in the marketing and promotion of phones today, leaving much of that to the manufacturers. Years ago, Sprint would spend millions marketing the EVO brand, with HTC coming along for the ride. Motorola similarly rode the back of Verizon’s massive marketing machine to success with the original Droid back in 2009. Today, carrier marketing initiatives are more focused on marketing their networks instead of specific devices, since the devices are pretty much the same across the board. That’s fine for Apple and Samsung, which have huge war chests of cash to spend marketing their phones. But for HTC and others, it presents a real challenge. 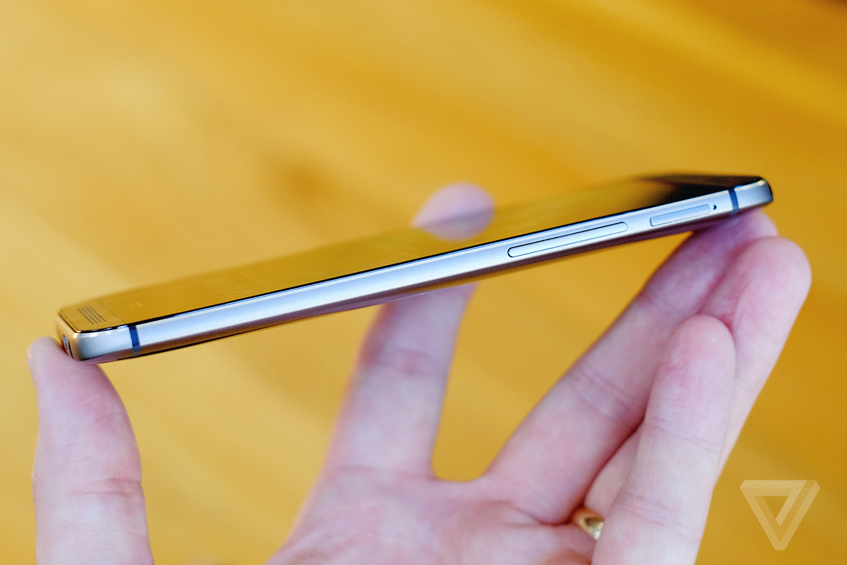 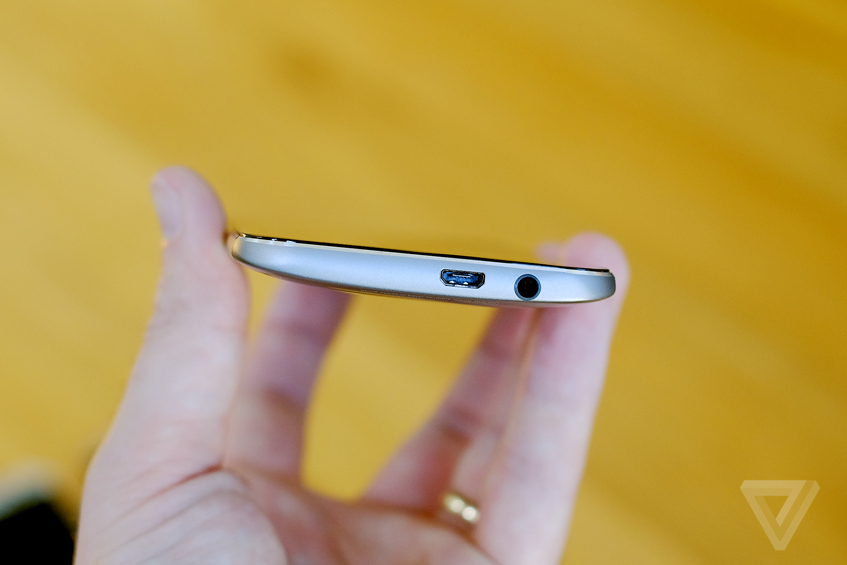 Bamford says that HTC isn’t concerning itself with being number one anymore. "We’re not that interested in selling the most phones," he notes. "We’re interested in selling the best phones. And I think you can be profitable with both of those strategies." That’s a significantly different strategy that Samsung is taking, where it wants to sell as many phones as possible, regardless of what it takes to do that. "We want to do disruptive design that’s very profitable in a particular niche, and that niche is people who want something different, who are focused on design and quality," continues Bamford. To that point Bamford and Croyle are right: the level of build quality and design of the One line is in stark contrast to the forgettable plastic Galaxy S4 and Galaxy S5.

HTC likely doesn’t have to be number one again in order to be successful, but it has said that 2014 will be a more profitable year. It could carve out a comfortable third-place position behind Samsung and Apple. But third place can be dangerous: with Apple and Samsung eating up the lion’s share of profits in the smartphone world, there is only so much to go around for the companies vying for third place and below. Not only will HTC have to steal customers away from Samsung and Apple to solidify its third-place position, it will also have to fend off the rapidly growing Chinese manufacturers, such as Lenovo, which just bought Motorola to greatly expand its presence in Western markets. Fortunately, HTC has a great product with the One, that part is already done.

Indeed, HTC will have to do just that if it wants to be in the conversation this time next year. As our tour of the design studio wraps up, Croyle tells me: "We feel like the product is strong. We just need to get people in the stores to pick it up, hold it, and then walk away with it."

Read our full review of the HTC One (M8) here.