Share All sharing options for: This chamber simulates Mars right here on Earth

Researchers in Spain have developed a vacuum chamber that can recreate most of the physical conditions found on Mars. The chamber, which cost over $200,000 to make and took a year to build, allows scientists to test the electromechanical gear that's being considered for use in future missions to the red planet. Their results were published today in Review of Scientific Instruments.

A system to douse instruments with Martian dust

In the study, scientists were able to mimic Mars' temperature, gas composition, total pressure, and UV radiation using environmental data collected from previous NASA missions. The researchers also included a system that allows them to douse instruments with Martian dust directly, to see how they hold up while in use. "In my view, the main problem for devices on Mars is the dust, which covers all the instrumentation and therefore decreases their average lifespan," said Jose Angel Martin-Gago, a physicist at the University of Madrid and lead author of the study, in an email to The Verge. Reproducing the effect of small debris is extremely important when studying solar panels, for instance, because they become less efficient as they get coated in dust.

To achieve Mars-like environments, the researchers first use powerful vacuum pumps to lower the chamber's pressure to a level that's about one billion times lower than the pressure we experience on Earth. Then, they fill the machine with "Martian atmospheric composition," or what we refer to as carbon dioxide. Once that's done, the scientists can begin testing small electromechanical instruments measuring up to eight inches.

One billion times lower than the pressure we experience on Earth

Unfortunately, the chamber — which the scientists have named "Marte" — does not flawlessly reproduce the Martian environment. It does not include Mars' gravity, for example, which is much lower than that of Earth. The other environmental factor that the researchers failed to mimic is the planet's volume — an omission that affects heat dispersal within the small chamber, Martin-Gago explained. "All the gas in a region of the planet has a similar temperature, whereas in our case we have some [temperature] effect due to the walls of our chamber." The scientists tried to solve this problem using gases that can transmit heat more efficiently, but the effect was still present in the final version of the chamber.

Nevertheless, the scientists think that they have built a valuable tool for physicists and astronauts alike. And their efforts did not stop with Mars. The teams has built a series of versatile simulation chambers that can mimic the surface conditions of various planetary bodies, Martin-Gago said, including Jupiter's moon Europa. "The vacuum technology [we built] has all the know-how to face each of these problems." Check out the chamber below. 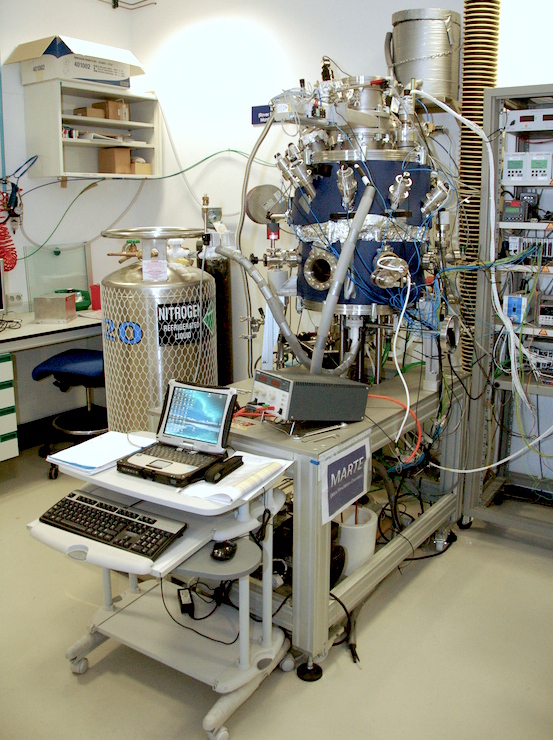