Share All sharing options for: Google Play Music finally lets you upload songs through the browser

Google Play Music has long been a solid option for uploading and accessing your music collection wherever you are, but using the Music Manager app to actually get your songs into the cloud wasn't always the smoothest or most intuitive process. However, a new feature tucked away in the experimental "labs" section of Play Music should make this process a lot easier — users can now upload whatever music they want straight through the browser using simple drag-and-drop. If the songs are matched with Google's vast music library, they'll be added automatically; otherwise they're simply uploaded.

In addition to uploading through the browser, users can also select a number of folders that the service will monitor and grab music from whenever it detects new songs are added to it. Your entire music library can also be downloaded through the web interface, as well, which essentially removes the need for the old Music Manager app.

Google says it built this new feature with the technology that powers its new Chrome Apps platform, which lets it build more complex, standalone apps compared to the older Chrome web apps. As such, there's a new Google Play Music mini-player app that shows up in your Chrome apps launcher (assuming you have it enabled). It lets you pause, skip forward or back, assign thumbs-up or thumbs down to songs, and displays the cover art — if you're listening to a playlist, its a pretty easy way to control your listening experience without having to flip back to your full browser window. 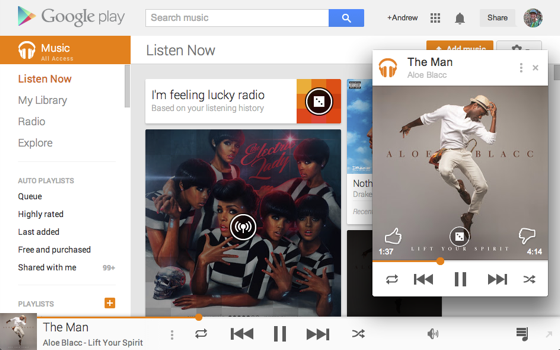 All told, it's a good improvement to the Play Music service — it'll probably be most useful to those uploading and managing a collection of purchased music rather than using Google's All Access subscription option, though those customers will see the benefits of the mini-player as well as easier uploads for music that isn't in All Access. Google says that it'll roll these features out to all users soon, but you can turn it on now in the "labs" section of the settings menu if you don't want to wait.

Music isn't the only Google Play feature getting a tweak today. Google Play’s "info cards" feature — which lets those watching a movie pause playback to get additional information about the actor in a given scene — is coming to the first three seasons of Game of Thrones. The feature is already available for over a thousand movies on Google Play, but it’s the first time the company is offering it for a television show; all the better for those anxiously binge-watching Thrones in anticipation of the new season premiere on April 6th.