Fires in the Amazon rainforest are taking a toll: NASA estimates that forest fires claimed at least 33,000 square miles of land in about a decade, but a group of Chinese designers has come up with an idea to combat this. The Rainforest Guardian skyscraper, which gained an honorable mention in eVolo‘s 2014 skyscraper competition, is the brainchild of designers Jie Huang, Jin Wei, Giaowan Tang, Yiwei Yu, and Zhe Hao and focuses on collecting and distributing rainwater into the land as needed during the dry and wet seasons.

The Rainforest Guardian looks like an upside-down tower featuring a flat, circular top with pipes hanging down off of it. It collects water in two ways: catching the rain that falls from the sky, and sucking up the excess water on the ground during the rainy season. The water is then filtered and stored in reservoirs before it's used for either irrigating the land or extinguishing fires. Keeping the ground hydrated should help prevent fires, but if one does start, the skyscraper has "firefighters" — little drone-like aircrafts made with water tanks and spray systems — it can deploy to help put out the blaze. 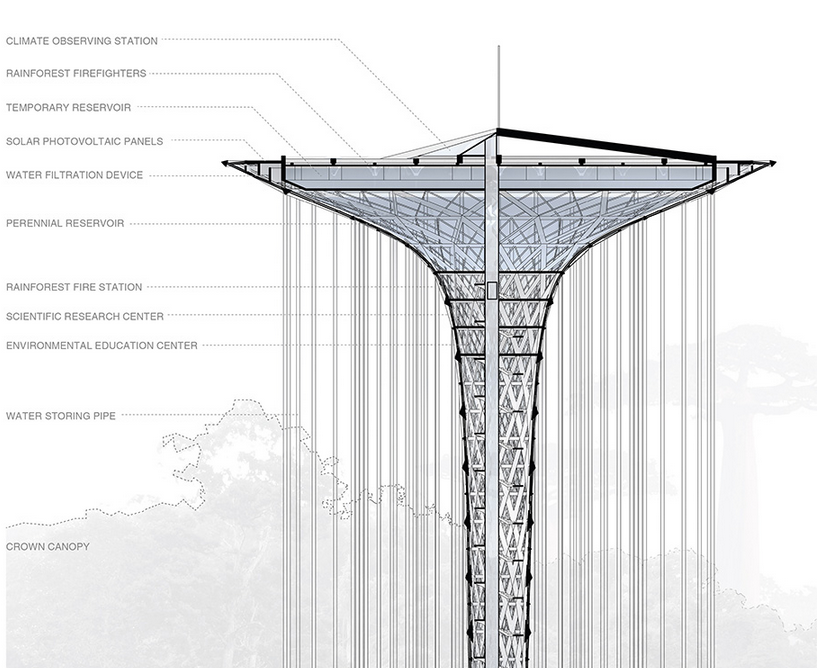 But the designers want the skyscraper to be more than just a gigantic water jug. They've divided up the space at the top of the structure — its widest point — to house different things on separate floors, including the main water reservoir, a research station, a tourist and educational center, and a climate observatory. The structure does so much and looks so futuristic for a reason — it's only a concept at this point, but it does offer an oddly stunning solution to a growing problem.