Twitter adds photo tagging to its iPhone and Android apps

Twitter adds photo tagging to its iPhone and Android apps

Twitter today announced an update to its iPhone and Android apps that lets you tag up to ten people in any photo you post. Additionally, the update also lets you upload up to four photos at once.

To help you tag people in photos you upload, a new "Who's in this photo?" button appears in the tweet compose screen once you've attached a picture. If you choose to tag friends, their Twitter handles won't take up space inside your tweet, affording you more space to caption the photo you're posting. You can customize notifications and privacy options for who can tag you inside the Settings page in the app or on the web. 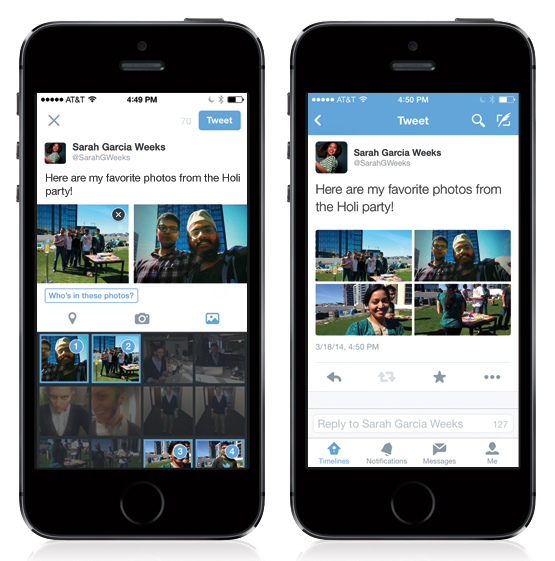 Were Twitter's latest features inspired by Ellen Degeneres' group selfie, the most retweeted photo ever? Perhaps. If each celebrity in her photo were tagged, it would indeed be a lot simpler to follow them all. Twitter has traditionally struggled with discovery, and has experimented with various ways to show new users who to follow and why to follow them. In its announcement today, Twitter was quick to point out that photo tags will show up inside tweets embedded on the web.

But on a broader scale, Twitter likely added tagging for the same reason Instagram did nearly one year ago. Twitter is all about "the now," so it's easy to lose track of quality content over time. Photo tags give the company the ability to index photos by person. The company already gave each user profile a photo gallery showing their recent uploads. Perhaps soon, Twitter will also also add a "Photos of me" tab the same way Instagram did. While the ability to tag friends in photos is certainly useful, Twitter now looks more like Facebook and Instagram than it ever has.