On his 52nd day as Microsoft’s chief executive officer, Satya Nadella took the stage to present the world as Microsoft sees it. Life today, Nadella said, is "mobile-first and cloud-first." As Nadella tells it, Microsoft is uniquely positioned to thrive in that world — because it alone understands the needs of people, their employers, and the developers who build devices for both. "That’s where we’re headed together," he wrote in a blog post after the event. "Into a world where the devices you love work with the services you love in a way that IT and developers love."

A world where Microsoft can lead again

Left unsaid is that the world Nadella describes is also one in which Microsoft, after years of chasing the tectonic shift to mobile devices, can lead again — by helping other businesses navigate the shift to mobile devices that threatened to derail Microsoft itself. Former CEO Steve Ballmer saw Windows as the center of the world, and the story of Microsoft was the operating system’s unstoppable march around the globe. At a small news event in San Francisco today, Nadella formally acknowledged a changed world: one where our computing is more likely to be done on a device made by a competitor than one branded with the Microsoft logo. "There is no trade-off; it’s reality for us," Nadella said as he pledged to bring Microsoft services to customers whatever platform they use. "What motivates us is the realities of our customers."

Microsoft’s reality check has so far been a hit with investors and consumers, who lit up Twitter in response to the event’s marquee news: the belated arrival of Office for iPad, which brings the company’s iconic productivity suite to tens of millions of Apple users. But the demonstration quickly moved on to products of interest mostly to enterprises and information-technology professionals: Enterprise Mobility Suite, a kind of Facebook Connect for businesses that manages employees’ devices and data access; and (gulp) Microsoft Azure Active Directory Premium, which lets businesses create online portals for employees to download apps for work.

And after four years of other developers building productivity tools for tablets, even Office for iPad feels more like an enterprise offering than a consumer one. At $99 a year for access to Office 365, which grants you access to Office applications on any platform you like, the software is positioned as an industrial-grade tool that you’d be unlikely to purchase without a vital business need. 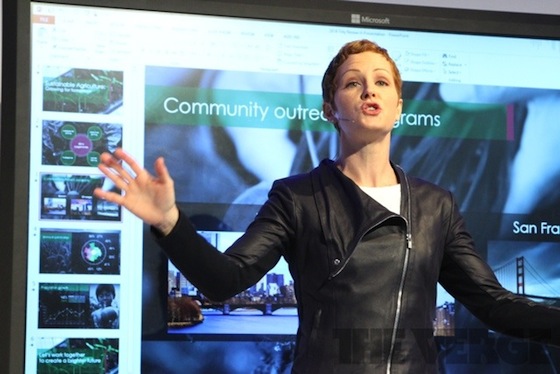 But in a nod to those "realities" Nadella spoke of, you can use Office to read and present your documents for free. "We want to make sure that everyone can have a taste of what Office is great for, and why people love it," said Julia White, Office’s general manager, in an interview with The Verge. "But we also wanted to add value for our Office 365 subscribers. We felt like that was the right balance." It’s a move that’s both more practical and more aspirational than we have seen from Microsoft in some time: a vision of a world where Microsoft thrives even when Windows is not at the center of it, and even if its own phones and tablets remain also-rans compared to devices running Android and iOS.

Microsoft under Nadella appears poised to remain a highly visible consumer brand, driven by customer loyalty to products like Office, Xbox, and Skype. (Next week, at the Build conference, we’ll hear more about the future of Windows — and perhaps more about where Nadella’s strategy leaves Windows 8 and Windows Phone, which can no longer rely on exclusive Office access to lure customers.) Notably, in his first major address as Microsoft’s CEO, Nadella scarcely mentioned any of those things. Instead he focused on Office and enterprise tools, a sign that this company will increasingly make its profits from selling tools to other businesses. There may not be a lot of excitement around "enterprise mobility," but there are significant profits to be made there — and Microsoft, with the products it announced today, is primed to reap them.

Nadella appeared calm and smiling throughout the event, and in a further show of confidence, hung out for a few minutes afterward to take questions from journalists. (Most of them wanted to know why Office for iPad had taken so long.) When a reporter asked how all these changes would affect Microsoft’s bottom line, Nadella said he "would leave it to Wall Street to do the analysis." But make no mistake — Nadella has already made his analysis. More than its peers, the company’s future lies in the intersection of work and play. And if it’s still not totally clear how Nadella will get Microsoft there, he may have at least identified a winning direction.