Spec Sheet: LG and Samsung battle Philips to light up your smart home

Share All sharing options for: Spec Sheet: LG and Samsung battle Philips to light up your smart home

LG has washing machines that text you and Samsung has an entire ecosystem of smart home appliances including TVs, air conditioners, and refrigerators. But until recently, neither of them made a smart version of one small and relatively boring device: the light bulb. A few companies like Lumen and Belkin have smart bulbs, but arguably the biggest player in the game is Philips with its Hue smart lighting system. LG and Samsung both announced new smart LED light bulbs within a few days of each other — and that means the battle to illuminate your home just got a little more heated.

Philips has been working on smart lighting since 2012 when it debuted the Hue collection. Sold at Apple stores and online, the Hue pack costs $199 and includes three 8.5-watt smart bulbs (which cost $60 individually) and the bridge that connects to your Wi-Fi router. You install them by screwing the bulbs into your light fixtures, downloading the Hue app to your iOS or Android device, and connecting the entire system to the bridge via the app. One bridge can support up to 50 Hue smart bulbs — that’s likely more than you’ll ever need, but it does give you the option to outfit your entire house with the bulbs. 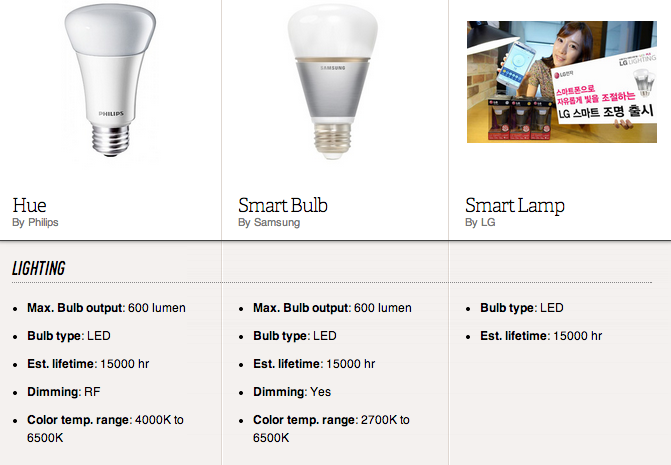 Click above for full specs for all three smart bulbs.

When the Hue smart bulbs first came out, the app could control the color and intensity of lights, with a wheel of over 16 million colors to choose from. You could also set timers to turn on and off the lights, as well as choose ambient light settings. But when Philips updated the Hue app in May 2013, the company expanded Hue’s offerings and made it much smarter than it was before. Using IFTTT, the bulbs can do things like change colors when it’s raining or blink when you have a notification on your smartphone. Geofencing capabilities tell the system when you (or really, the app-enabled device) leave your home so it can automatically turn off the lights, and turn them on when it senses you return. The timer setting now lets you program the lights to follow your daily schedule, or turn on and off randomly while you’re on vacation to deter burglars.

Another important feature of the Hue system is its use of ZigBee LightLink, which lets it talk to other smart home appliances that follow the same standard. By using LightLink, Hue should be able to communicate with, say, a ZigBee motion sensor and turn on your lights when you enter a room. But not all of ZigBee’s appliances can talk to each other yet, making it difficult for other manufacturer’s products to be totally interconnected using the system.

But LG and Samsung wanted to make sure Philips doesn’t completely own the smart lighting sphere with Hue. LG’s first smart light, the Smart Lamp, is a 10-watt light bulb that you control with an app that will be available for iOS and Android. The bulbs sync to the smartphone app via Bluetooth and Wi-Fi, and doesn’t require a bridge like the Hue system.

LG hasn’t said how many bulbs can be controlled in the app at once, but it does seem to have a few features similar to Hue bulbs. "Security mode" will flicker the lights randomly when you’re away, and "party mode" will pulse the lights with music playing from your smartphone, although that feature is only available on Android devices. The Smart Lamp will debut in Korea for 35,000 won (about $32) per bulb, and there’s no word on when it will reach other countries. 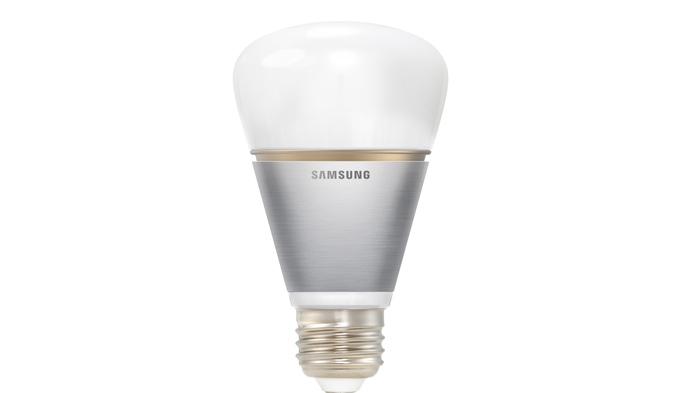 Samsung just announced yesterday that it will launch a line of smart light bulbs at Light + Build 2014 next week, and from the details released, they seem fairly basic. The bulbs will come in 10-, 18.3-, and 26.7-watt models and will be controlled with a smartphone app that is compatible with up to 64 bulbs at a time. Samsung also mentions that corporations can get the bulbs with an embedded ZigBee radio to control them all from a centralized system, but it didn’t specify if similar capabilities would be coming to regular consumers. It doesn’t seem to have any party tricks like Philips’ or LG’s bulbs have, but focusing on making the basic functions of a light bulb easier to control could work in Samsung’s favor.

LG and Samsung entered the game, but Philips is still winning

It’s worth noting that Philips’ Hue bulbs have been out for two years, and appropriately the system is more comprehensive than LG’s or Samsung’s. However, both companies chose a different approach, using Wi-Fi and Bluetooth for communication and forgoing the use of a hub. The bridge is restrictive in the sense that it can support just 50 bulbs at once, and one Hue app cannot communicate with multiple bridges. LG and Samsung are using common wireless standards to make the bulbs work, and hope that simplicity can make them a hit with consumers.

It was only a matter of time for LG and Samsung to enter the smart lighting sphere, and better now than later: Philips just announced today that it will debut smart, white-only Lux bulbs that will be cheaper than the color versions at $39 each. The company also announced Hue Tap, a disk that acts as a light switch for the Hue system that you control just by tapping. LG and Samsung will have to do some extra leg work to catch up to Philips, but that will give consumers more options in smart lighting and more ways to test the waters of a connected home.

If you want to learn more about any of the products mentioned above, all of our information on them can be found through the database box located beneath the article. For more on light bulbs and just about every product around, you can check out the full Verge Database right here.