Sony vs. Facebook: the battle for your reality has just begun

Virtual reality is here, but it's not what you expect

Virtual reality is truly coming. There’s no longer any question. In the span of a single week, two titans emerged to proclaim that VR would be the future of their industries. Facebook and Sony, companies which respectively defined social networking and personal electronics, each validated what plucky startup Oculus VR had been saying all along: that virtual reality will be a bold new medium for gaming, for communication, and much, much more. Facebook’s play was to buy Oculus outright, spending $2 billion to bring an array of impressive talent under its wing, while Sony spent untold millions to introduce Project Morpheus, its own spin on the Oculus headset.

But just because virtual reality is a multibillion-dollar idea doesn’t mean that it’s ready for consumption today. We’re coming to the realization that when the first commercial VR headsets hit the market, they probably won’t deliver the vast, Matrix-like experiences you might expect.

"Virtual reality is going to be the final platform, and it starts with vision."

Two years ago, Oculus defined virtual reality as something more than simply putting pixels right in front of your eyes. The Oculus Rift made the headset lightweight, offered integrated head tracking, and provided a wide field of view so users could freely look around in a virtual environment. That immediately set it apart from devices like the Nintendo Virtual Boy or Sony’s more recent Personal 3D Viewers, which — at best — offer the illusion of looking at a static movie-theater screen from a fair distance. With Project Morpheus, Sony has now embraced the Oculus definition of virtual reality. Though the Sony is a bit more comfortable and the Oculus is a bit less blurry in use, there are more similarities than differences. Each has a pair of fisheye lenses that blow up left-eye and right-eye images to a size that fills your vision, while an external camera tracks a pattern of LEDs mounted on the headset to tell which way it’s moving.

That means you can look in practically any direction, plus lean around objects as the system tracks your head. What you can’t yet do, however, is actually walk around or interact with anything you see in a realistic way. Oculus hasn’t figured out a controller solution yet, and at least in an early demo, Sony’s wand-like PlayStation Move controllers felt like inadequate surrogates for hands. Virtual reality controllers are still a work in progress, and that’s a problem.

Virtual reality: You can sit anywhere

Perhaps that’s why Oculus and Sony are resetting expectations. Oculus now calls VR a "seated experience," and most of the VR demos at GDC fit that theme: tame games where you sit and move your head around a fixed 3D space rather than exploring a virtual world. While Oculus CEO Brendan Iribe points out that there’s a lot you can do seated — drive a car, pilot a spaceship, direct a soccer game, watch a live concert, sit on a gorgeous beach — it sounds like a far cry from jacking into the Metaverse with a cyberdeck.

"Personally speaking, I was very disappointed with [3DTVs]."

But there’s a good reason Oculus and Sony might be playing things safe for now. Remember when 3DTV was going to be all the rage? The companies pushing VR believe they need to ensure quality control so people don’t convince themselves they hate it — like 3D — after a bad first impression. "Personally speaking, I was very disappointed with the quality of the [3D] TVs that consumers got out of the industry, including Sony," says Sony PlayStation software boss Shuhei Yoshida. "Of course I didn’t say that at the time because our PR people would shoot me," he laughs. This time, he says that PlayStation is producing Project Morpheus directly. "We are making it, so we can make sure that we do the right things."

Speaking with Sony, it’s clear that the company’s PlayStation division is serious about virtual reality. It truly feels like Sony intends to do what’s needed to make VR a success, rather than simply checking it off a list. Though the company won’t confirm that it will produce a final product — "We want one!" says Yoshida — the prototype hardware feels so polished that it’s clear Sony is invested. "I think some of us were worried that they would not take it seriously, that they would come out with a quick VR device that would not be up to standard, that would give VR a bad rap," says Jan Goetgeluk, whose company Virtuix sells an omnidirectional walking surface for games. "They listened very carefully to Valve, to Oculus, they took good notes... I think it will be up to par with the Oculus Rift," he says.

And for a brief moment it seemed like Sony, not Oculus, would be leading the consumer VR revolution. At GDC 2014, Sony convincingly argued that it was in the best position to realize the virtual reality dream. Compared to Oculus — then merely a well-funded startup — Sony had the muscle to create virtual reality hardware and experiences all on its own, and the money to fund and market them. Sony promised a plug-and-play system as easy to use as a game console, in stark contrast to the experiments we’d seen from Oculus thus far.

Instead of being overshadowed, Oculus gets a front-row seat

Now that Oculus is becoming part of Facebook, it’s a very different story. By selling to Facebook, Oculus gets to stay in the headlines as the bearer of consumer virtual reality. Sony’s plug-and-play games and entertainment may eventually have to compete with Facebook’s grand vision of VR becoming an entire new computing platform. There, Sony’s strength could become a weakness, because in order to maintain the quality control of a plug-and-play game console, the company will have to be restrictive about the titles it allows developers to publish.

Still, that doesn’t mean that Facebook and Sony are going to cross swords quite yet. They’ve carved out different territory — PC vs. console — and for now, they’re both facing the same problems.

Both Sony and Oculus tell us they’d like to work with each other as much as possible to ensure content is compatible with both headsets — and that those headsets need better components. Originally, Oculus used commodity smartphone and tablet LCD screens in its VR headset, but founder Palmer Luckey tells us that’s not good enough anymore. Now, Oculus will use its Facebook dollars and clout to invest in purpose-built components. "I don’t think there’s a CEO of an Asian manufacturing firm that wouldn’t pick up the phone if Mark Zuckerberg called him," says Antonio Rodriguez, an Oculus investor and board member. 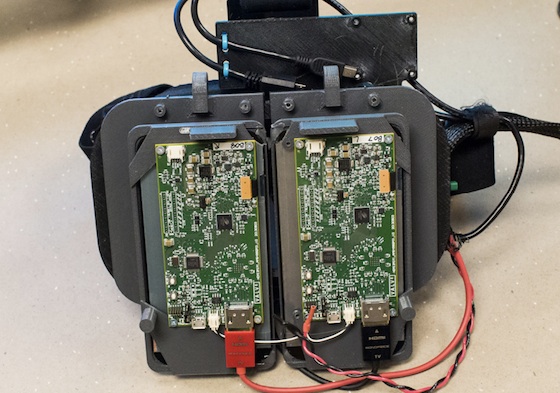 For now, VR is still a little blurry, a little pixellated, and you can’t just reach out and touch it. But that could change after a few years when those new components reach the market. Valve recently showed off a VR prototype using forward-looking components and has been working with Oculus on nailing down the lingering issues of VR technology. The two companies have a shared vision of what virtual reality could look like in two more years, after the tech matures, and those who saw Valve’s prototype tell The Verge that future is worth waiting for.

"Tech issues tend to dissolve with time," says Sony’s Yoshida. "Like refresh rate, or speed, or persistence, or cost or weight or size, it’s all just a matter of time. But getting everything right is really hard."

But as long as you can keep your expectations in check, you won’t need to wait two years. Oculus doesn’t intend to solve the controller issue by the time it launches a consumer version of its virtual reality headset, and Oculus CEO Brendan Iribe says that’s just fine. "Right now we want to get vision down. It all starts with vision," he says, adding that there will be "incremental improvements" to add our other senses later on.

"There is not going to be a platform past this," Iribe says. "Virtual reality is going to be the final platform, and it starts with vision."