'Sharknado 2: The Second One' is coming with more sharks and no shame July 30th

Share All sharing options for: 'Sharknado 2: The Second One' is coming with more sharks and no shame July 30th

Above, you will find a crop of the new, official poster for Sharknado 2: The Second One. It stars Tara Reid and is the followup to the original, which became a darling of the internet for a brief time, probably because the rest of cable television completely lost its sense of humor sometime around Season 2 of The Walking Dead. SyFy — whose tagline "Imagine Greater" has become masterful commentary on the complex interplay between genuine heartfelt enthusiasm for campy shows and the pointless, empty core of all creative human endeavors — has announced that this sequel will air on July 30th at 9pm ET, which is one day earlier than originally planned.

Below, you will find the entire poster, uncropped, so that you are able to count how many sharks are required to create a sharnado powerful enough to rip the Statue of Liberty off of her pedestal and send her careering through the skies of New York City. Spoiler: it's at least five (5) sharks. Ian Ziering, who will also star in Sharknado 2: The Second One, said the sharknado will also have other things in it. He told Access Hollywood "those will be the apex predator but, you may see some octopus, you may see some other things." Ziering's character will also use a bigger chainsaw in the new film, but hopefully he will only use it for self-defense, because we wouldn't want to see a show about sharks and tornadoes destroying New York City get too dark. 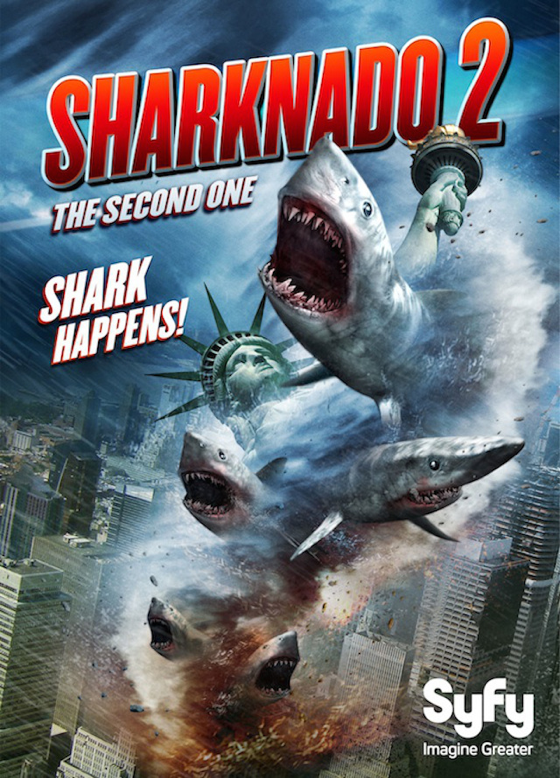