The bloody promises of 'The Walking Dead' game's second episode

The bloody promises of 'The Walking Dead' game's second episode

It's amazing how quickly you get used to seeing an 11-year-old covered in blood.

If the first episode of the second season of The Walking Dead game was about getting you used to playing as young Clementine, the second episode is about seeing and making her do horrible things. Repeatedly. Over the course of the two hours or so the game lasts, she'll fire a gun, wield a hammer and spear, and (if you choose to) say some pretty nasty things. She has to lie, she has to kill, and she's getting better at both. At certain points her eyes will take on a particular look that lets you know she's not messing around, so when a new character tells Clementine that she looks older than her 11 years, you understand what she means.

The shining beacon of hope is the north

At the beginning of the season, Clementine found herself unwittingly joining a new group of survivors, and in the newest episode, "A House Divided," you finally start to learn a bit more about these strangers. Like everyone in the zombie apocalypse, they're running away from something — in this case a particularly dangerous someone — and early on you're forced to abandon the relative safety of their home and get moving. The shining beacon of hope is the north, where the human population is smaller and the zombies move more slowly in the cold. (Or so the rumors say.) This all goes to show just how far Clementine has traveled over the course of the game, largely on foot; her journey started in Georgia and she's already in North Carolina. If things go according to plan, she'll end up in Michigan.

That's a big if, though. "A House Divided" only spans the course of a few days, and already the group is struggling. Getting through the woods, crossing a bridge, and finding some shelter all prove to be almost devastatingly challenging tasks — it often feels like you can't go 10 minutes in the game without someone dying. Of course, once you find what appears to be a refuge (thanks in part to the surprise return of a character from season one), that's when things get their worst.

In a lot of ways, "A House Divided" feels like a bridge episode. There are plenty of tense moments and shocking scenes, but it's pretty light on revelations; it raises more questions than it answers. And based on the brief glimpse of episode three that's shown when you're finished, it looks like the game is headed to a very interesting place. This episode is just the journey getting you there. 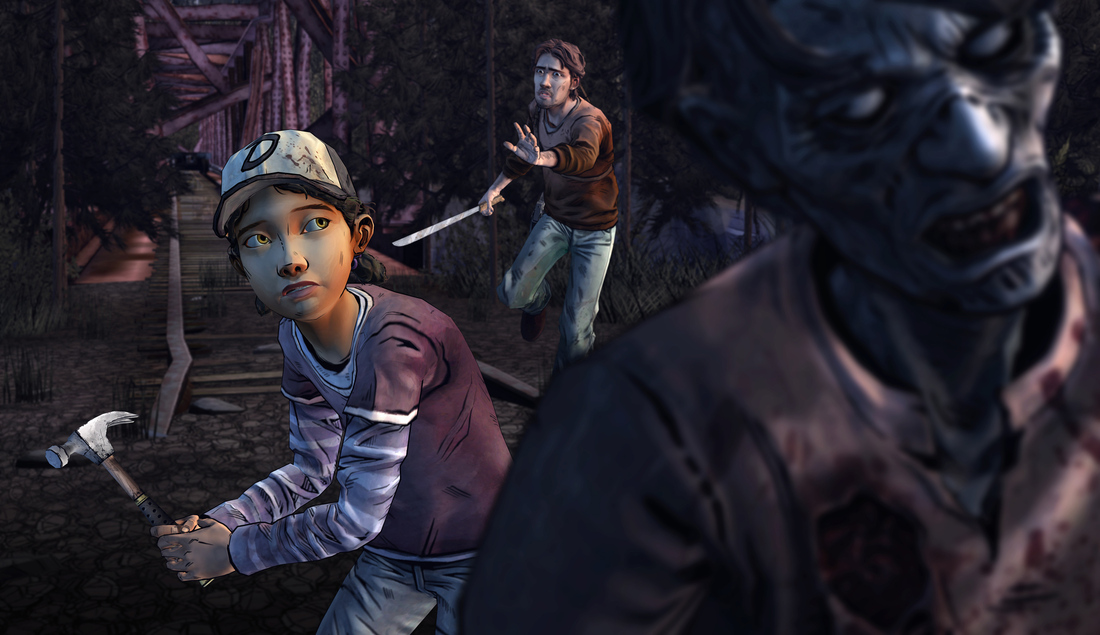 It also has a few strange moments that stand out quite a bit next to the otherwise excellent writing. The biggest oddity is just how much everyone depends on Clementine: adult characters are constantly asking her to do important jobs, from searching an unknown (and potentially zombie infested) building for food to talking down a stranger with a gun.

You don't feel that same sense of satisfaction

Sure, she's tough, but she's also 11, and someone they've only known for a few days. Entrusting her with these responsibilities seems like a very unlikely move. There's also a dinner scene in which several characters abruptly stand up and switch seats for no discernible reason, as if they were playing musical chairs. No words are exchanged. It serves a purpose, letting you talk with two sets of characters during the same sequence, but it's such a bizarre moment that I'm still thinking about it now.

Over the course of its first season, The Walking Dead became known for a few things: showcasing the worst side of humanity, putting players in seemingly impossible situations, and killing off characters with reckless abandon. "A House Divided" has all of that, but it's also missing something. When the credits roll, you just don't feel the same sense of satisfaction as in a typical Walking Dead episode.

But it still feels pretty good smashing a zombie's head in with a hammer.

"All That Remains" launches today on Steam and the PlayStation 3, with Xbox 360 and iOS versions to follow shortly. You'll need to own episode one to play it.