Source The Atlantic Cities and e-QBO

A giant cube could be coming to your city to help you charge your cellphone. Italian design firm T°RED in collaboration with the energy research institution Ricerca Sistema Energetico created e-QBO, a customizable, modular cube that collects energy from the sun to provide power to public spaces. During the day, the panels soak up sunlight and store energy in battery packs, which can then be used by anyone to charge electronic devices and provide Wi-Fi. 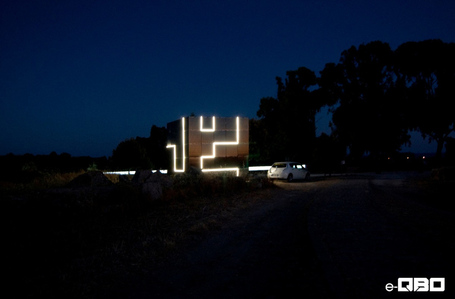 e-QBO powers public spaces and expands upon them

The design is essentially a square made from wood and steel with solar panels and LED lights on the exterior, but it can be expanded or minimized depending on how many solar panels are used to make it. Each PV panel is one square meter, so the block can be made small enough for people to sit on, or large enough to become an inhabitable space. Creatively applying solar panels isn't new — designers have found ways to stick panels on nearly any surface and make beautiful objects that harvest solar energy. But e-QBO does something different by creating a new public space while powering the one it already sits in.

And Erica Marson, vice president and general manager at T°RED, told The Atlantic Cities that it takes little effort to install one just about anywhere. This means an e-QBO could be installed for a few weeks for a specific event and the dismantled and move somewhere else. With a 5 x 5 cube costing $150,000, it might be a bit steep for one-time use, but cities could potentially invest in one and move it from place to place.

Since the first e-QBO prototype was built last year, T°RED has installed others in various locations like Piazza San Fedele in Milan and an archaeological site in Sicily. The design got a lot of attention at last month's World Future Energy Summit in Abu Dhabi, and the Italian city of Piacenza has ordered an e-QBO to potentially use as an information hub for its Expo 2015. T°RED is currently in talks with a tourist resort in Lebanon to develop an even larger version of e-QBO, with internal space of up to 200 square meters.