Getty Images is betting its business on embeddable photos

Share All sharing options for: The world's largest photo service just made its pictures free to use

If you go to the Getty Images website, you'll see millions of images, all watermarked. There are more than a hundred years of photography here, from FDR on the campaign trail to last Sunday's Oscars, all stamped with the same transparent square placard reminding you that you don't own the rights. If you want Getty to take off the watermark, you'll have to pay for it.

Starting now, that's going to change. Getty Images is dropping the watermark for the bulk of its collection, in exchange for an open-embed program that will let users drop in any image they want, as long as the service gets to append a footer at the bottom of the picture with a credit and link to the licensing page. For a small-scale WordPress blog with no photo budget, this looks an awful lot like free stock imagery.

It's a real risk for the company, since it's easy to screenshot the new versions if you want to snag an unlicensed version. But according to Craig Peters, a business development exec at Getty Images, that ship sailed long ago. "Look, if you want to get a Getty image today, you can find it without a watermark very simply," he says. "The way you do that is you go to one of our customer sites and you right-click. Or you go to Google Image search or Bing Image Search and you get it there. And that's what's happening… Our content was everywhere already." 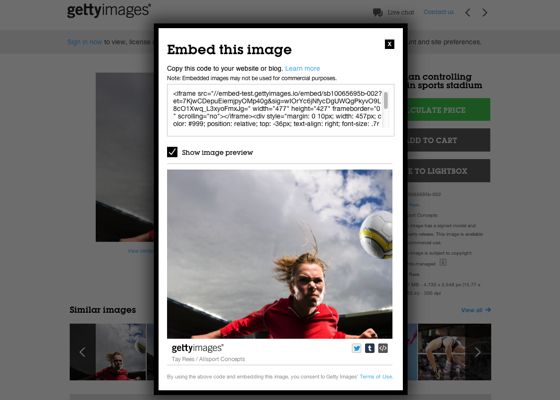 Looking at the pictures on Twitter, it's hard to disagree. Wildly popular accounts like @historyinpics can amass hundreds of thousands of followers with nothing but uncredited, unlicensed images, and since there's no direct revenue, there's little point in asking them to pay. At that scale, anything more expensive than free is a prohibitive cost. The new embeds strike directly at that kind of social sharing, with native code for sharing in Twitter and Tumblr alongside the traditional WordPress-friendly embed code. Peters' bet is that if web publishers have a legal, free path to use the images, they'll take it, opening up a new revenue stream for Getty and photographers.

The new money comes because, once the images are embedded, Getty has much more control over the images. The new embeds are built on the same iframe code that lets you embed a tweet or a YouTube video, which means the company can use embeds to plant ads or collect user information. "We've certainly thought about it, whether it's data or it's advertising," Peters says, even if those features aren’t part of the initial rollout.

The digital shift has been hard on photographers

The clear comparison is the music industry, which was hit hard by piracy in the '90s and took decades to respond. "Before there was iTunes, before there was Spotify, people were put in that situation where they were basically forced to do the wrong thing, sharing files," Peters says. Now, if an aspiring producer wants to leak a song to the web but keep control of it, they can drop it on Soundcloud. Any blog can embed the player, and the artist can disable it whenever they want. And as Google has proved with YouTube, it's easy to drop ads or "buy here" links into that embed. "We've seen what YouTube's done with monetizing their embed capabilities," Peters says. "I don't know if that's going to be appropriate for us or not." But as long as the images are being taken as embeds rather than free-floating files, the company will have options.

Embeds have enabled a new kind of link rot

Getty Images' profits haven't cratered like music conglomerates: its profits actually increased nearly $100 million from 2007 to 2011, thanks in part to digital licensing. Still, the digital shift has been hard on photographers, with professional stipends increasingly replaced by smaller payments to amateur or freelance photographers. Part of Peters' promise is that the new embeds will open up larger flows of money down the road.

The biggest effect might be on the nature of the web itself. Embeds from Twitter and YouTube are already a crucial part of the modern web, but they've also enabled a more advanced kind of link rot, as deleted tweets and videos leave holes in old blog posts. If the new embeds take off, becoming a standard for low-rent WordPress blogs, they'll extend that webby decay to the images themselves. On an embed-powered web, a change in contracts could leave millions of posts with no lead image, or completely erase a post like this one.

Still, such long-term effects are years away, if they happen at all. In the meantime, Getty Images is focused on the more immediate problem of infringement. "The principle is to turn what's infringing use with good intentions, turning that into something that's valid licensed use with some benefits going back to the photographer," says Peters, "and that starts really with attribution and a link back."