Infinite pixels: 8-bit art lives on in the Game Frame

Share All sharing options for: Infinite pixels: 8-bit art lives on in the Game Frame

Right now, there's an arms race to pack the most pixels into the tiniest amount of space. It's the tech equivalent of a pissing contest, with major companies trying to boast that their smartphone, tablet, or computer screen is the most indiscernible from reality. But one San Francisco engineer isn't buying into that approach. He's created a simple box with a grid of big, bright, dancing pixels that you can hang as art or transform for myriad different applications, including a super low-resolution movie screen, an arcade unit, or even a real-time weather station.

Pinball tables were just the start

That box is called the Game Frame. It's the creation of Jeremy Williams, who previously devised the Airfield, a set of LEDs for pinball enthusiasts to revive old pinball playfields and hang them on the wall. Williams came up with the idea after playing Midway Arcade, an iPad game with a prize store that redeems tickets for virtual gifts. Among those gifts were moving, neon pixel-art displays featuring classic gaming characters. The only problem? The displays weren't something you could buy in real life.

So Williams decided to make his own, and set about soldering LEDs to a circuit board and programming basic light controls. The result is a box a little deeper than a picture frame that comes alive with classic nostalgic images — or whatever else you display on its 16-by-16 grid. Williams demoed an early version of the Game Frame on Tested last year and people approached him after the shoot asking if he'd make them one. So he timidly put his prototype up on Kickstarter, where it blew past Williams' funding goal of $15,000 in just four and a half hours. "I lowered the goal the night before, thinking I'd just add $5,000 of my own money if it didn't make it," he says. "The whole thing just blew me away." 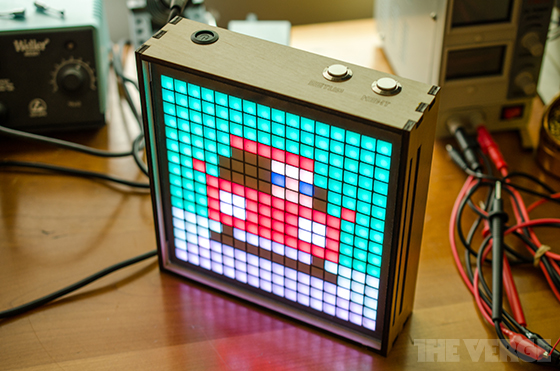 At its most basic, the Game Frame is a display — but it's a very nice-looking one. A premade set of LEDs shine through a laser-cut grid, which prevents light from one pixel from leaking into the next. That's topped by a layer of vellum to diffuse the light into a pleasing and uniform look. The front panel is set in a wooden box that's been laser-cut by materials company Ponoko and hooked up to three simple controls that let users cycle through designs. Additional options allow users to decide how long each design is up and how bright the unit is. Those bells and whistles are enabled by an Arduino microcontroller, which can be expanded with extra hardware or software.

"Add a temperature gauge, and you could have it display the weather."

"There are expansions to hook it up for whatever you want," Williams says. "Add a temperature gauge, and you could have it display the weather." Another mod, he notes, could let you sync up multiple units to display animations that span over several screens.

The Game Frame comes with 40 designs made by pixel-art trio eBoy, best known for creating complex isometric pixel art. Williams wrote the group to see if they'd be willing to contribute designs, thinking they'd say no. Instead, he recalls, "they loved it." eBoy proceeded to create 60 colorful, vibrant animations including faces, animals, and even a spaceship with eyeballs — the sole design that Williams specifically requested. Beyond eBoy's creations, people are free to design their own animations (including movies), and load them onto the box using an SD card. 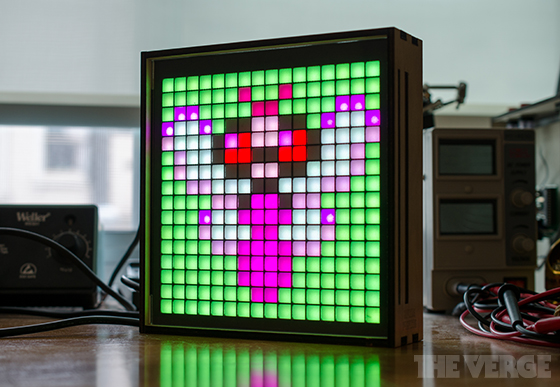 Game Frame isn't the first Pixel Art project to hit Kickstarter, nor is it the most complex. Williams points to Al Linke's Pixel project, which used a 32-by-32 pixel frame, as an inspiration for bringing the Game Frame to a wide audience. The initial version of Pixel reached its funding goal early last year, and now Linke's following up with a second model that expands to 64 by 64 pixels and can display images sent wirelessly from nearby smartphones. There's also the Pixelstick, which raised $628,417 for a programmable LED light bar that displays graphics in a single line. Unlike the Game Frame or the Pixel, the Pixelstick is designed for creating long exposure photos and video, using lights to create time-lapsed images.

The Game Frame's funding runs through this weekend, and Williams has now raised upwards of $120,000 — meaning he'll spend three months building hundreds of units in his apartment. After that, Williams isn't sure whether he'll keep the operation going. At the very least, he says, it's been a chance to find out what's involved in getting a crowdfunded hardware project off the ground. "I don't want to manufacture things," Williams says. "I'm just so happy I connected with other people in a meaningful way."