See no evil: inside one city's quest to kill its surveillance program

Oakland could set the standard for what cities collect and share

Share All sharing options for: See no evil: inside one city's quest to kill its surveillance program

A city council meeting in Oakland, California started routinely around 5:30 on Tuesday evening with rubber stamped appointments, discussion of a community park report card, and a no-parking zone, among other things. But this was no ordinary council meeting. Nearly eight hours after it began, the city’s elected officials reached a major decision — one that’s arguably the strongest statement against bulk surveillance of any city in the country since 9/11.

The subject of that heated meeting was the proposed Domain Awareness Center (DAC). It's a controversial mass-surveillance system similar to programs in New York, Boston, and Los Angeles that would funnel data from public and private sensors and camera feeds into one central information center.

The opposition to DAC on Tuesday was blatant and striking, bordering on disrespectful in many cases. (One speaker told the council that DAC's capabilities were "beyond your understanding," before going further: "You don't understand the technology, and it seems you don't understand the law.") Out of over 100 speakers who spoke during the public comment section of Tuesday evening’s council meeting, not one spoke in DAC's favor.

"Cities have a choice."

But the opposition worked. The bulk of the DAC capabilities were struck down in the council vote, which means Oakland’s elected officials potentially put millions in federal funding at risk and became the first major US city to take an official stand against bulk surveillance. Though the city’s decision is considered imperfect by many local activists, it establishes Oakland as a model for other cities interested in limiting what they amass and share with the federal government.

"Hopefully this will show other cities that they don't need to collect all this information," says Brian Hofer, a spokesperson for the Oakland Privacy Working Group, which opposes DAC. "They have a choice."

As part of the American Recovery and Reinvestment Act of 2009, Oakland was eligible to receive millions in funding to build a surveillance system for its port — a massive container ship facility on the San Francisco Bay. When officials in Oakland's police department caught wind of the project, they also wanted in. (OPD had previously laid plans for a surveillance camera project.) The DAC proposal progressed from a port-specific system into a full-blown, city-wide fusion center with additional funding from the Department of Homeland Security (DHS) and the Federal Emergency Management Agency (FEMA). It would integrate feeds from hundreds of cameras, first responder reports, and gunshot location devices, among other forms of streaming data. The expansion was presented to the council as a way to help police address crime in a city with a growing violence problem.

But clashes between Occupy protesters and the Oakland Police Department — in addition to ongoing concerns about the actions of local police officers on the street — fueled a deepening skepticism about Oakland law enforcement and how city officials dealt with dissent. And when the first of Edward Snowden's NSA leaks went public last June, a movement started to stop DAC in its tracks. 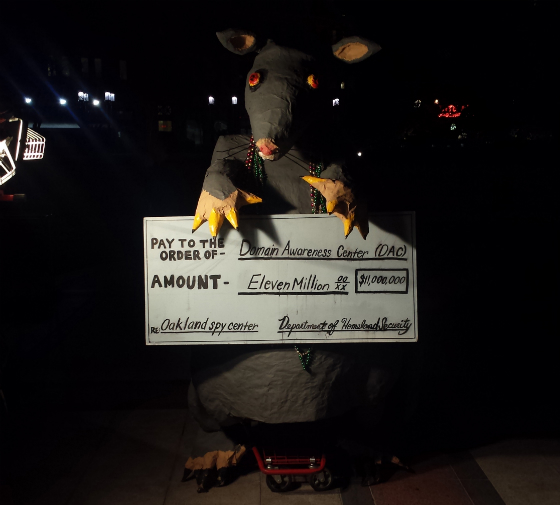 That same month, the first of DAC’s proposed five phases was complete, with new traffic cameras, computers, and a network installed with FEMA dollars. But even as the project was underway, activists pointed out that there were no "enforceable safeguards" governing DAC's actions — no rules set forth about what data DAC could collect and how that data would be stored. The city council voted to push the project towards its second phase anyway and asked municipal staff to finalize a privacy policy by March of this year.

Meanwhile, the movement to oppose DAC gathered steam. A piercing investigative report from the East Bay Express in August dug into the dubious background of the principal contractor behind DAC, which was later taken off the project for being in violation of a city ordinance against contracting with nuclear weapons manufacturers. And while it seemed the project would continue as planned with a new contractor, that, too, was called into question. A second East Bay Express report culled through internal city documents obtained by Oakland Privacy Working Group (OPWG) to show that Oakland city staff had no stated intention of using DAC as a crime-stopping tool, and that it was instead seen as a way to deter and monitor protests. Plus, there was the simple issue of money: while federally funded projects are often seen by local politicians as "free money," they’re often not; beyond the construction of facilities and network setups, there’s still maintenance and related costs to consider.

"This is not a Muslim issue, but an American issue."

For the last three months, the movement to stop DAC has snowballed. The newspaper reports, combined with relentless activism by the OPWG and other groups, turned the opposition into a genuine movement.

Two weeks ago, the council temporarily put the brakes on expanding DAC. And during Tuesday evening’s meeting, they went one step further: the cameras will go offline, and ShotSpotter, the city’s gunfire-detection software, will not be fed into DAC. "The city council deserves credit for being responsive to the concerns of the public, for not blindly rushing forward with new technologies without first being fully aware of all their implications, and for not allowing federal grant money to dictate local choices," said Linda Lye, an ACLU staff attorney, in a statement to The Verge. "It is a major win."

The idea that government agencies can find and collect information about US citizens is hardly a new concern. But Lye, for one, says she was surprised by the city council’s willingness to approve a project they didn't seem to grasp. "Approving something without understanding the privacy implications is backward," she says. Another opponent of the DAC, Imam Zaid Shakir from the city’s Lighthouse Mosque, took a similar tack. In a press conference before the meeting, he described the blanket surveillance of Muslims in programs like the NYPD's "Demographics Unit" and noted that the DAC represents a kind of unthinking acquiescence toward such programs. That mindset, Shakir says, is "not a Muslim issue, but an American issue."

Indications toward unthinking acquiescence were certainly on display Tuesday night. At one point, city council member Pat Kernighan described ShotSpotter, the audio surveillance system used by Oakland police to pinpoint gunfire locations, as "low-tech," "not fancy," and "containing no audio feed" that would funnel into DAC. It seemed like a genuine attempt to persuade attendees that ShotSpotter was not a way around the Fourth Amendment. (ShotSpotter’s own publicity material says the technology analyses sound waves without streaming audio.) But the response was a room full of skeptical laughter from those who find it difficult to believe that a collection of microphones won’t pick up audio feeds if it’s requested by the right official. (Kernighan eventually cast her vote in favor of a ShotSpotter-free DAC.) 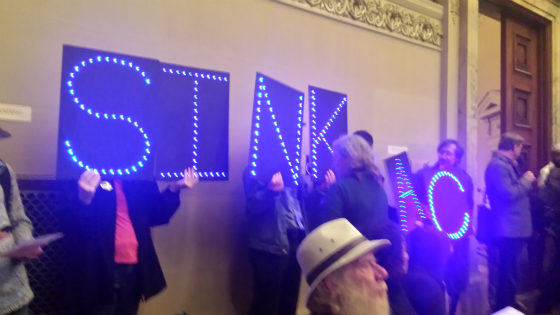 In the end council members heeded the stark opposition of local residents. And while some see the council's decision to limit DAC as a win, others still say the decision didn’t go far enough. One activist, Elle McKenna, told The Verge she simply can’t believe what's being promised. "Anybody who thinks that they're going to implement this kind of [limited surveillance] program and not eventually expand it is naive."

"Who wouldn't want to see how we handle privacy and surveillance?"