The insanity of making six retro games in six months

Share All sharing options for: The insanity of making six retro games in six months

Rusty Moyher spent so much of last year building retro games he "blew out" his hands. As part of the Retro Game Crunch challenge, Moyher joined up with fellow developers Shaun Inman and Matt Grimm to develop six 8-bit-style games over the course of six months, based on ideas from Kickstarter backers. It was an ambitious project with tight restrictions and a tough schedule, which led to some overexertion. "We didn't really limit the amount of hours we were putting into it," says Moyher, who developed repetitive strain injury issues while working on the half-dozen new games. After a few delays, the trio managed to complete the games at the end of last year, and this week the collection is available as a bundle to anyone who missed out on the crowdfunding campaign.

This is what crowd participation looks like for video game development.

On paper, the self-imposed challenge was simple: each month backers would submit a theme, and then vote on which one would actually be turned into a game. The developers would then spend three days building a prototype based on that idea. Backers would check out the prototype, offer some feedback, and the team would spend the rest of the month fleshing out the idea into a fully fledged game. The plan was to do this each month for six straight months. "We were a bit bold," admits Moyher.

The resulting games are as diverse as you'd expect from a collection culled from crowdsourced ideas. When the trio was given the theme "music influences the level," they built a rhythm action game called Wub-Wub Wescue, where you play as a pug rescuing an explorer. It's a platform game, except the obstacles move according to the music and you can collect records to slow down the tempo and make things a bit easier. The very first theme challenge was "immortal, learn to die." The result was a puzzle game in which a robot has to find ways to kill himself while avoiding the repair bots that want to fix him back up. It's deceptively challenging and very fun.

The games also vary quite a bit when it comes to scale and quality. Paradox Lost is perhaps the most impressive game, a sprawling side-scrolling adventure in the vein of classics like Metroid or Castlevania. The theme was "can't stop time traveling," and the game gives you a gun that lets you travel between three different time periods by shooting special crystals. It really feels like a long-lost NES game, and it's surprisingly expansive for an experience built in a month.

"I could always spend more time on something."

One of the struggles the team had was getting everything they wanted into each game before their self-imposed deadlines. For a game like Paradox Lost, which is brimming with inventive ideas, leaving it behind to immediately switch to something new was difficult. "I could always spend more time on something," says Moyher, "but whether I should is another question."

A desire to make things as good as possible wasn't what caused the delays, however. The team didn't run into many technical issues along the way — in fact, from a coding perspective, things got a bit easier as time passed — and the Kickstarter backers provided lots of good themes that resulted in clear game ideas. Instead, the delays were caused by unforeseen circumstances: in addition to Moyher's RSI issues, which forced him to see a physiotherapist, one of the team members also had to leave to help take care of a sick relative. The six games were initially going to be completed by last June, but these issues delayed the final release until the end of the year. 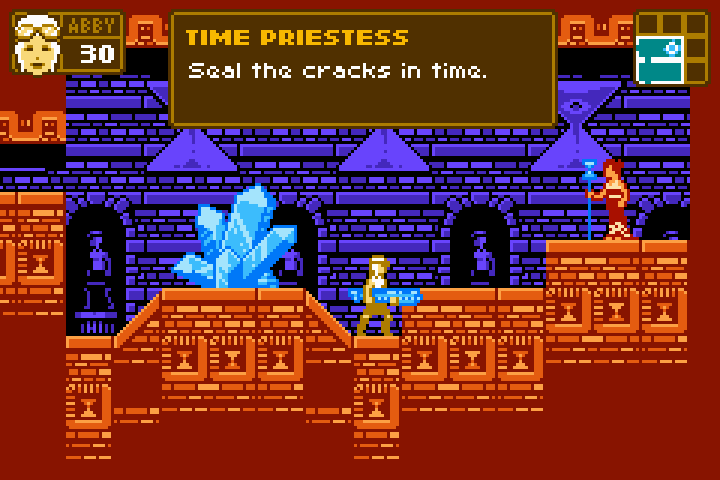 "It was just super intense and super hard."

For backers, Retro Game Crunch provided a unique experience, letting them not only have an intimate view into how these games get made, but also a say in what the games would look like. For those who pick up the newly launched bundle, that experience is missing — they get a collection of six retro-style games, but without all of the added context of the crowdfunding campaign. What was a yearlong journey for backers becomes something else for new buyers. "It's a totally different product," says Moyher.

Now that the games are available to a wider audience, Moyher is looking forward to finally getting a chance to work on something else, after dedicating the last year to retro gaming. Currently there are no plans to do anything else with any of the game concepts, such as flesh them out into larger experiences or port them to new platforms (each game is available for Mac and Windows). And though they're proud of the work that came out of it, it's also unlikely the team will be doing a similar project anytime soon. "It was just super intense and super hard, and that was mainly due to the schedule," says Moyher. "The rules that we set out for ourselves were less flexible than they should've been.

"I don't think there will be a season two."