Samsung takes another crack at streaming radio with Milk

Samsung takes another crack at streaming radio with Milk

But was anyone asking for a Galaxy-only music app?

Hot off the launch of Beats Music, does the world need yet another music streaming service? Samsung's about to find out.

In January, Samsung actually shut down its streaming service for US customers — but now, it's coming back as something completely different. Today the company's introducing Milk Music, a free streaming radio service designed to get people listening to music from any genre in just a few seconds. And for the immediate future, there are no ads to interrupt listening.

Only for some of Samsung's latest phones

Samsung says that Milk Music is an effort to solve common problems in what's become a sea of streaming music services. Those include too many ads and interruptions, long and arduous setup processes, and songs that play too frequently on a given station, says Chris Martinez, Samsung's director of services planning. The company's solution is an app — designed only for its own phones — with a large circular dial in the middle of the screen that you touch to change stations.

The idea for a dial was lifted from physical radio controls, and running your finger around its edge changes the station without any wait for the music to start. To pull off this trick, the service automatically downloads the first eight seconds of every song on the dial, which can display up to nine genres at a time, with individual stations in between. Samsung's mixed this with haptic feedback to give the dial a pleasingly analog feel. 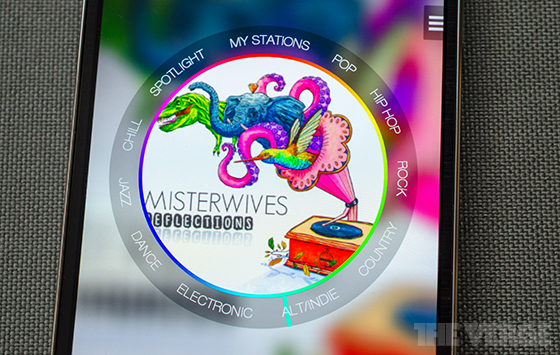 Like many other streaming radio services, you can start a station based on a single song, artist, or genre. And once you're listening to a genre, you can drill down into another menu of sub-genres, like moving from country to bluegrass. You can also change the main genres that show up on the dial.

Using Milk, you get six song skips per hour, per station, a feature that's tracked with a skip button below each song. That's the same amount of skips as Pandora, Last.fm, and iTunes Radio. You can also bookmark songs you like, and see a viewing history of everything you've listened to. Underneath each station there's also a fine tuning menu, which pulls up from the bottom of the screen and lets you tweak whether you want upcoming songs that play to be popular or obscure, old or new, and whether or not to draw selections from your list of favorites.

All told, there are 13 million tracks in Samsung's streaming library, though that collection really belongs to Slacker Radio, which is powering the app behind the scenes. Despite that, you can't link up to an existing Slacker account to carry over existing tastes and preferences. However, Samsung says the two companies partnered to curate a "spotlight" genre that appears on the dial at all times, and will be home to first listens of new albums and other Milk-exclusive content. 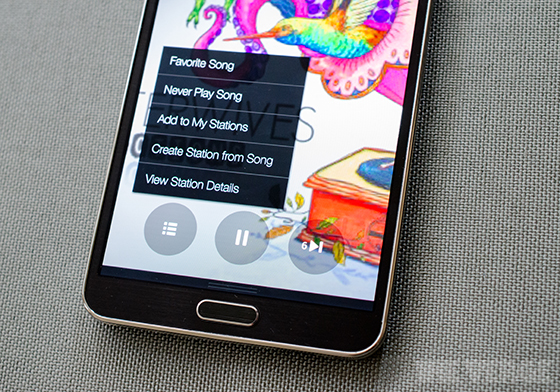 If there is one odd aspect to Milk, it's that it doesn't currently send you in any direction if you actually want to buy something you like. The previous service was tied to the company's Music Hub store, and for a monthly fee, users could listen to all sorts of tracks on demand. Now Samsung considers Milk and the Hub store two disparate services aimed at completely different types of users, and is betting that those who want free music will be the bigger of the two.

No store in sight if you actually want to buy something

Samsung wouldn't elaborate on how big that potential market is, though it pointed to 200 million people who have bought Galaxy phones and Galaxy Note devices worldwide. That said, Milk is currently limited to the US, and is only available on a newer selection of Samsung's Galaxy devices — a list that doesn't include tablets. Device owners can download Milk from the Google Play store, but Samsung declined to comment on whether it planned to offer the service preloaded on newer phones.

Just don't get too accustomed to an ad-free service. Samsung plans to incorporate ads at a certain point, but declined to specify when that might be or detail how the ads would be integrated into the service. Ultimately, that means the appeal of Milk will depend on a novel dial and the caliber of its music curation. With so many rival services that compete on similar merits but work on myriad devices, that might be a tough sell.