Chromebooks are making a big statement in the laptop world: NPD Group Inc. reported that Chromebook sales accounted for 21 percent of all notebook sales last year. For devices that are functionally little different from tablets — designed for basic tasks like checking email and web browsing — they're growing fast. Even as the tablet market continues to grow, capturing 22 percent of the entire personal computing market just last year, Chromebooks are giving people an alternative to rectangular touch screens.

Form factor sets them apart: the best Chromebooks offer the practicality and productivity of a keyboard with the stripped-down capabilities of a tablet. Toshiba just announced its first Chromebook at CES in January, and this week Samsung announced its new faux-leather styled Chromebook 2. These are the first 13-inch Chromebooks on the market — a middle-ground screen size that remains popular even as screen sizes rise across the board — but that’s not the only way they set themselves apart from the growing number of laptops running Chrome OS. 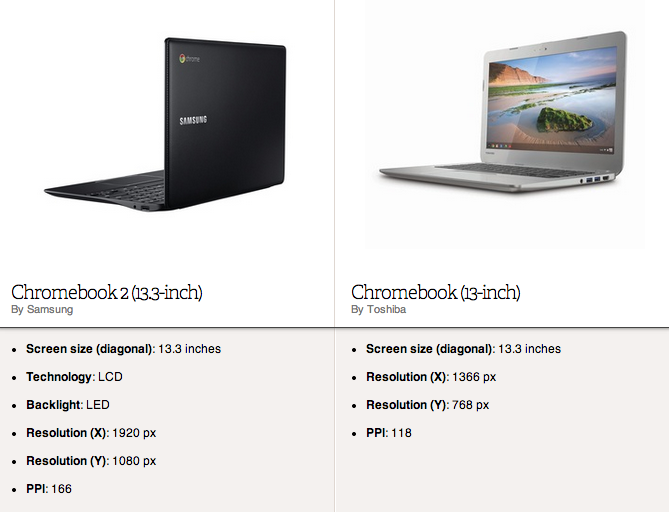 They might share screen size dimensions (there’s also an 11.6-inch Chromebook 2), but you can immediately tell these two Chromebooks apart. Toshiba's looks like a MacBook Pro knock-off with its silver body and black chiclet-style keys, making it sleek enough to look attractive from a distance and decent at close inspection. It’s comfortable to travel with, weighing 3.3 pounds, and while it’s lighter than the brightly colored HP Chromebook 14, it’s more premium than portable. Also, its weight combined with the dimpled silver design makes it feel a little flimsy in your hands, even if it performs just as well as any other Chromebook.

Samsung continues its pleather kick with the Chromebook 2, which could be mistaken for a folio pad with its stitched detail. The 13-inch model comes in silver, and the smaller model comes in black and white. It's a different kind of look, seemingly fighting against the style Toshiba's Chromebook is mimicking, and the laptops look as sleek as faux-leather could be. In some ways the new Chromebooks seem to have the laptop structure of Samsung’s Ativ Book 9 Plus, featuring a slightly concave keyboard design with matte finish on the keys, with the stitched skin of its Galaxy Note devices. 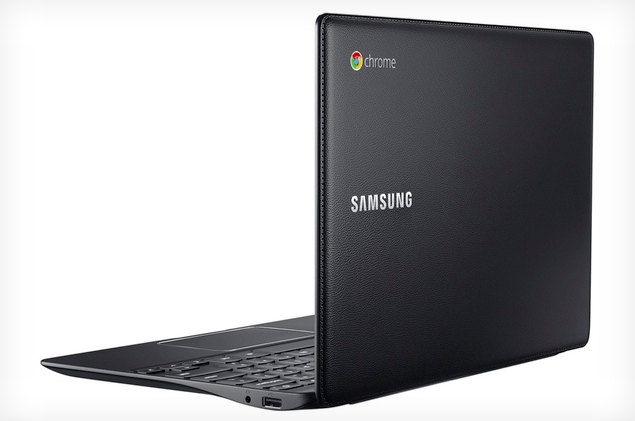 Chromebooks typically serve the same purposes, in similar fashion, but Toshiba's and Samsung's 13-inch models have a few important differences. Toshiba's Chromebook follows the usual pattern: it has a Haswell-based Intel Celeron processor, 2GB of RAM, a 16GB hard drive, and a 1366 x 768 display. Samsung started by using its Exynos 5 Octa processor, which it claims will allow the Chromebook 2 to get 8.5 hours of battery life. If that claim is correct, it would be a huge difference from Toshiba's model which, in our test, only lasted an afternoon.

Both Samsung and Toshiba offer the same 16GB hard drive capacity, but Samsung has a slightly larger 4GB of RAM. And Toshiba's 1366 x 768 display won’t be able to compare to Samsung's 1920 x 1080 display; it's the first Chromebook ever to feature that resolution at a reasonable price, and that upgrade along with the longer battery promise could be enough to persuade Chromebook buyers to shell out the extra $100 for Samsung's model.

Since all Chromebooks run on Chrome OS, often to the same effect, screen resolution and design appeal make a huge difference. Manufacturers like Toshiba and Samsung are going to have to make harder decisions about how they want to build their models to stand out — internal and external hardware matter much more when tied to identical software. In its first attempt, Toshiba seems to want to make a Chromebook that could be mistaken at a glance for one of its higher-end laptops. Samsung, meanwhile, wants a design that won’t stick out from its other products, but is attempting to see how high-end it can actually make a Chromebook while staying within the safe and affordable price range. Ultimately, low prices provide a low ceiling, but we’ll be waiting to see which manufacturer can outfit a Chromebook with the best mix of specs and the looks for the money.

If you want to learn more about any of the products mentioned above, all of our information on them can be found through the database box located beneath the article. For more on Chromebooks, laptops, and just about every product around, you can check out the full Verge Database right here.