T-Mobile is today announcing new versions of its Simple Choice plans that include more high-speed data and unlimited international texting services. The Simple Choice plans were first introduced last year as part of the carrier's Uncarrier rebranding, and are designed to make it easier for customers to choose a rate plan when buying wireless service. T-Mobile says that all 13 million of its customers already on Simple Choice plans will automatically get upgraded to the improved plans on March 23rd.

The new plans double the amount of high-speed data service available before T-Mobile will throttle connection speeds — customers will now get 1GB of high-speed data along with unlimited talk and texting services for $50 per month. Three gigabytes of high-speed data is available for $10 more per month, while 5GB can be purchased for $70 per month. T-Mobile is also raising the price of its unlimited plan and adding 5GB of data (twice as much as before) for tethering to a tablet or laptop to $80 per month ($10 more than it was previously). As with all Simple Choice plans, these do not include a subsidy for a smartphone, so those that purchase a phone to go along with them will have an additional monthly fee (a 16GB iPhone 5S costs an additional $27 per month, for instance). 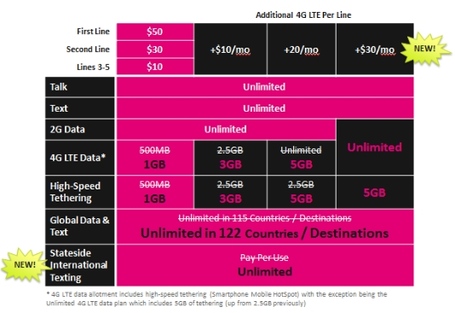 In addition to the higher data caps, Simple Choice plans now offer unlimited international texting from the United States to virtually any country in the world (three small island nations are excepted — the Maldives, St. Helena, and Wallis and Futuna) at no additional charge. The carrier is also expanding the number of countries where its global roaming services included with Simple Choice are available to 122.

New plans offer better services, but prices are still higher than the rest of the world

T-Mobile's Uncarrier transformation and subsequent service plan changes last year instigated a raft of changes across the industry, with the numbers one and two carriers, Verizon Wireless and AT&T, changing their offerings in response. Overall, there are more attractive rate plans from every carrier in the US today than there were a year ago, but Americans are still paying far more for wireless services than virtually every other developed country in the world. T-Mobile's announcements today are good for its customers and anyone that signs up for its plans, but we still have a long ways to go before wireless plans in the US are anywhere near as affordable as other countries.

Update: This article has been clarified to note that the price of T-Mobile's unlimited data plan is going up by $10 per month. T-Mobile says that customers on the older, lower cost plan will not automatically be moved to the new, higher cost version.