The CUPID drone strikes with 80,000 volts to the chest

Share All sharing options for: The CUPID drone strikes with 80,000 volts to the chest

In a studio in downtown Austin, we're tasing a dummy. We've been instructed to stand back and not to move at all during the test itself, which consists of a six-pronged copter-drone flying closer and closer to a silver mannequin, before it shoots a pair of electrocuted barbs into the layer of foam sitting in front of the dummy's torso.

The drone is called CUPID, a Tarot hexacopter equipped with an 80,000-volt stun gun. (Most police-issue Tasers top out at 50,000.) That same morning the team tested it out on a Chaotic Moon intern, who hopefully got at least a stipend out of it all.

It's designed by Chaotic Moon's William "Whurley" Hurley, and the guts of the device are remarkably complicated. The power of the voltage creates an electromagnetic field that fries any electronics within 4 or 5 feet of the stun gun. (Luckily, Whurley warned us to keep a safe distance away when the gun fires, otherwise we might have lost our cameras.) Protecting the guts of the drone from the EMP blast was obviously necessary, so it wouldn't come crashing to the ground after the blast. In the end, the team surrounded all the electronic elements in a Faraday Cage, a conductive enclosure that blocks electrical fields.

Whurley has a whole plan about how CUPID might actually function in the world. If you were protecting a set property against intruders, for instance, it would be easy to have CUPID approach anyone who crosses a certain threshold and beam a picture back to the property owner. If the property owner doesn't authorize the intruder, it would be easy to have speakers on the drone issue a stock warning and, if the intruder doesn't comply, alert the authorities and tase them into submission until the police arrive. This goes way beyond the demo we saw, but Whurley insists it could be done with only minimal changes to the device we saw. The hardware, for the most part, is already here.

The hardware may be ready, but we're not

At least that's what Chaotic Moon says. As cool as CUPID is, it's still basically a stunt, designed to attract coverage. The most difficult parts of the project are the autopilot, the tracking device, the facial recognition: everything that wasn't on display. But the project's still interesting, because the larger problem isn't the tech but the politics. Even the most drone-friendly commercial guidelines would probably raise an issue with what's essentially a self-flying electrocution bot, even if the end result turns out to be no more dangerous than a human security guard with a stun gun. There's an element of future shock to it; it's the kind of thing we can imagine 20 years in the future, but not now, not yet. The hardware may be ready, but we're not. 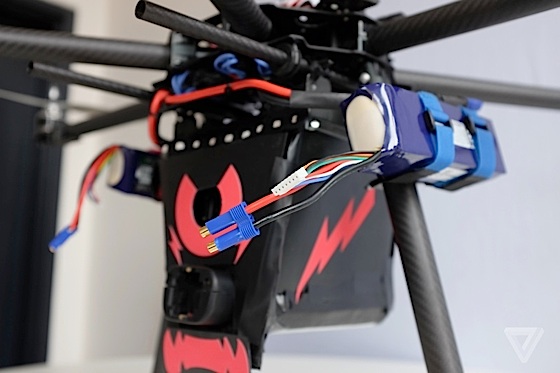 The Chaotic Moon theory is that demos like this one can help make us ready. Once we've seen the drone in action, we're not talking about abstract theory anymore. Suddenly we can use a colder kind of utilitarian calculus. "We thought a lot about, 'How could this be used?'" Whurley said. "Perhaps there's a raid on a house and somebody runs. Why send somebody with a gun chasing him down the alley? The drone could just go and detain them and then you could just go and pick them up." Is that something we want? Until we're actually able to see how Taser drones work in the real world, it's hard to even face the question. If we're going to grapple with the reality of drones, we need to chip away at their uncanniness. Strange as it seems, that might start with demos like this one.