"I'll bet a lot of metal drummers might be jealous of what I can do now."

Share All sharing options for: Robotic arm turns man into a cyborg drummer

When Jason Barnes was electrocuted two years ago, he lost the lower half of his right arm, seemingly ending his dreams of being a drummer — but thanks to a new prosthetic he's able to finally achieve that goal. Barnes initially built his own makeshift device so that he could still drum, but eventually partnered with Georgia Institute of Technology professor Gil Weinberg to build a robotic version. He tried it out for the first time last week, telling New Scientist that "it was pretty awesome." 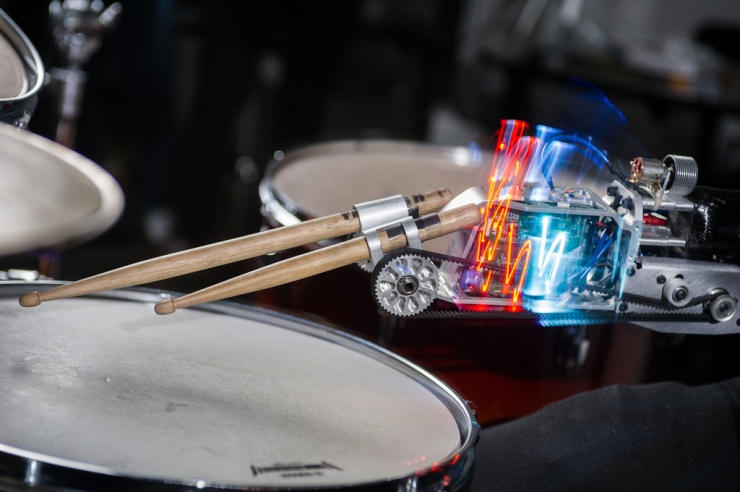 "The drummer essentially becomes a cyborg."

The device utilizes a process called electromyography, where it's able to follow Barnes' direction through electrical signals produced by his upper arm muscles. To use the arm, Barnes tenses his muscles to control a small motor that handles the drumsticks. Much like fully robotic musicians, Barnes' prosthetic also gives him a slight advantage over normal human drummers — he can hold two sticks at once, a particularly useful skill for playing tricky jazz tunes. While the first stick follows his directions, the second improvises. An embedded chip allows the two sticks to play at different rhythms, and Barnes is also able to drum faster than any regular person.

"The drummer essentially becomes a cyborg," says Weinberg. "It's interesting to see him playing and improvising with part of his arm that he doesn't totally control." Barnes will be performing for the first time on March 22nd, in a concert to help kick off the Atlanta Science Festival. "I'll bet a lot of metal drummers might be jealous of what I can do now," he says.