Is there life on Mars? NASA is still trying to find out, discovering evidence of water in a Martian meteorite just over a week ago. But though scientists are happy to investigate meteorites and live vicariously through robotic rovers roaming the Red Planet, they're really itching to get their hands on samples scooped right off the Martian surface to analyze here at home. Now, a team at NASA believes they can do so cost-effectively, as soon as 2022, by relying on commercial spaceflight provider SpaceX for a little help.

Back in 2011, NASA proposed using a modified SpaceX Dragon capsule — dubbed Red Dragon — to deliver equipment to the Martian surface as a landing craft. More recently, however, NASA's been looking for ways to bring samples collected by rovers — particularly the upcoming Mars 2020 rover — back to Earth. Barring humans themselves making it to Mars to pick up those samples (due to concerns about deadly radiation and boredom) scientists needed a cost-effective alternative, and they believe Red Dragon might do the job. While initially skeptical that the Earth re-entry capsule could land on Mars without heavy modifications, NASA planners tell Space.com they now believe the craft could indeed survive the trip, while still housing enough gear to transfer samples and a second vehicle to send them back to Earth. 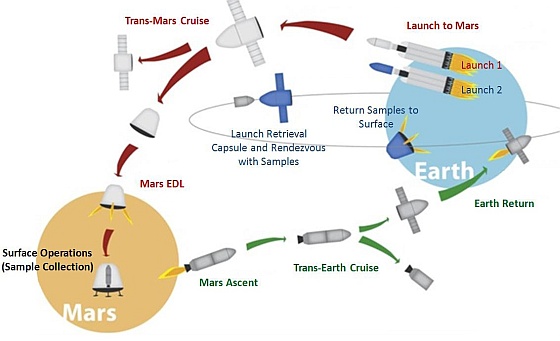 It's important to note that the idea is still a proposal, that no such mission has yet been planned and that funding for the proposal may not exist. But at least NASA now believes such a thing is possible on a budget. "The significance of the work is that it opens the door to the efficient achievement of an important planetary science objective at a lower complexity level and, by extension, at potentially lower cost than previously considered," said Andrew Gonzales, leader of the NASA team studying the idea. Now, we'll see if our renewed interest in space is enough to help secure that funding.

SpaceX and Virgin Galactic: countdown to the era of commercial space flight