For decades, a group of rhesus monkeys has been under observation at the University of Wisconsin-Madison. Half were randomly selected to eat as much as they desired for the rest of their lives, while the rest were stuck on nutritious, but heavily restricted diets consisting of 30 percent fewer calories. The number of monkeys has slowly dwindled over the years, with scientists taking notes on how each one died.

Now, 25 years since the study first started, the researchers have published their latest results. The control monkeys, which were on unrestricted diets, had roughly a three times greater risk of age-related death and disease than those that were calorie restricted. Of the 38 monkeys on each diet, 28 of the control monkeys died from age-related causes compared to just 10 in the restricted group. The diseases and disorders included diabetes, cancer, cardiovascular disease, brain atrophy, sarcopenia, and bone loss, according to the study, which was published today in the journal Nature Communications. For all causes of death, including those not related to age, the control monkeys had a 1.8 times greater rate of death. In short, the monkeys consuming 30 percent fewer calories lived longer. 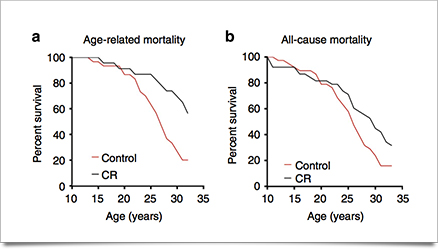 Monkeys on calorie-restricted (CR) diets lived longer than those that ate freely (control). Chart A only shows age-related deaths, whereas Chart B includes all causes of death.

That doesn't mean that you should go out and chop your daily caloric intake by 30 percent, however. Rozalyn Anderson, an assistant professor involved in the study, said in a press release that "it's a research tool, not a lifestyle recommendation." She added, "We are not studying it so people can go out and do it, but to delve into the underlying causes of age-related disease susceptibility." Those underlying causes are related to how a restricted diet can alter the metabolism and change the regulation of energy in the body.

"It's a research tool, not a lifestyle recommendation."

These findings are the latest in a long debate on the effects of caloric restriction in humans. The idea that it could be connected to longer lives and a decrease in disease was first shown in tests with lab rats in the 1930s, and more recently, studies on flies, worms, yeast, and mice have shown a potential of huge life expectancy gains. But the results of a similar long-term study on rhesus monkeys published by the National Institute on Aging (NIA) in 2012 concluded that it wasn't clear that there were significant benefits in primates.

The University of Wisconsin-Madison researchers say in their paper today that the control NIA monkeys were thinner and ate less than their own control monkeys, and they suggest that the NIA monkeys were all on some form of a calorie restricted diet. That won't settle the debate, but now that both sides have largely completed their research, the two plan to work together to draw further conclusions on the effects of a low-calorie diet. Ultimately, a mixture of environment, diet choices, and caloric intake could hold the key to longer lives.